Posts In the Paddock 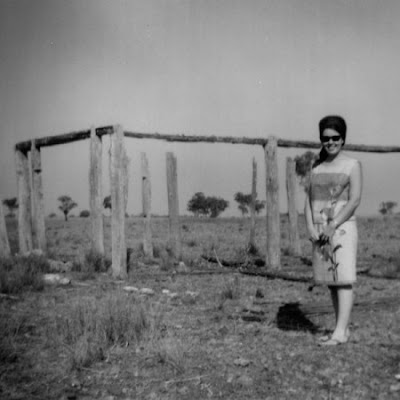 POSTS IN THE PADDOCK presented by My Darling Patricia, produced by Marguerite Pepper Productions in association with Moogahlin Performing Arts for Performance Space, Carriageworks, as part of the EXCHANGE season.

POSTS IN THE PADDOCK is a profoundly moving experience.

This is the fourth production by My Darling Patricia that I have attended, the others were: POLITELY SAVAGE (2007), NIGHT GARDEN (2009) and AFRICA (2011). Since that first encounter in 2007, with POLITELY SAVAGE at the old Performance Space, I have always anticipated the work with high expectations. All original work, from concept, writing and form exploration, across multi-media usage and exploration, drawing on a wide input of craftsmen and artists from a wide source of disciplines, the works have always been investigations/viewpoints from a highly idiosyncratic set of imaginations, with the highest sense of cultural concern and contemporary integrity. The works always seem to reflect long and deep preparation and a truly collaborative and patient process of finding the best means to tell the story, to communicate the concerns of the artists for both an enlightening and entertaining journey for the audience present to witness.

The initiating artist of POSTS IN THE PADDOCK, Clare Britton, a foundation member of the company, visited the property of her extended  family (the O'Brien's) and came across posts in a paddock. One hundred and eleven years ago, relatives of Ms Britton "were murdered by Aboriginal Bushranger, Jimmy Governor, on (this) property in the Hunter Valley. Known as the Breelong Blacks, Jimmy and his brother were on the run for 99 days - the longest manhunt in Australian History. He was executed in 1901."

The work on "POSTS IN THE PADDOCK began with six women sitting at a table together for a week in 2008, discussing the events involving Jimmy Governor and the O'Brien family in 1900. That week, Aunty Rhonda Dixon-Grovenor introduced My Darling Patricia to the notion of Didirri - deep listening". This concept of Didirri is the guiding influence to the form of this work for the audience.

Three of the performers, Clare Britton, Rhonda Dixon-Grovenor and LeRoy Parsons have personal histories and connections to the principal characters in this story and it is partly this that infects the work with a sweet melancholy and a sense of a holistic healing through bi-cultural comprehensions.The present generation of both sides of this story look back together at the tragic events of their entwined families and ancestors' story heritages.

One of the very interesting developments, for me, in this past year has been to witness the new approach to the thematics in Australian Aboriginal storytelling on our stages. If you read my blog account of WINDMILL BABY, you will see part of my personal concerns. That NAMATJIRA, BULLY BEEF STEW, BELONG and BLOODLAND have recently begun a theatrical dialogue with Sydney audiences that reflect a growing maturity and spread of storytelling concerns is now crowned with this production of POSTS IN THE PADDOCK.

This is part of the post-apology movement of cultural reconciliation. Lily Shearer, the Cultural Collaborator to this project says: for we that have "inherited 223 years of the IRA (Invasion, Removal and Assimilation), the journey that the POSTS IN THE PADDOCK process (takes) us on is truly healing of spirit, land and families. (That) to reflect on histories of the past together truly demonstrates reconciliation at work in a community, not as a Government directive, but as a human need for (mutual) forgiveness to move forward for a better Australia".

This work begins by inviting the audience to the POSTS INSTALLATION (Design, Fiona Foley collaborating with Clare Britton). We enter into a darkened space onto a black soft flooring and see some erect glowing posts, illuminated internally, reminiscent of Tim Storrier's signature burning fences and ropes. We are surrounded by an environmental soundscape of bush noises, and on approaching each of the posts we, further, hear them 'speak' - recorded stories and interviews, that acquaint us with the possible identity of these disappearing, decaying 'emblems' of a history (Editing, composition,arrangement and Programming by Declan Kelly). This natural returning to the earth of these posts, when given these verbal accretions of murder, grief and loss, through the recorded messages, gather in this artistic remembrance - a pronouncement that "this has happened" and attention can and should be given.

We are gently guided to our seats in the auditorium and the posts glow, now further away, behind a gauze scrim. In front, simple sets of dry grass vegetation create a sense of the virgin land. Trees stand upright in the soil. Indigenous inhabitants, gather and hunt across the land (Set Design:Clare Britton collaborating with Bryony Anderson). Woman (Rhonda Dixon-Grovenor) and Man (LeRoy Parsons). Some white settlers arrive on the land (Clare Britton and a wonderfully silent, Sam Routledge) and begin to shift its profile with the dressing of the Aboriginal people and engaging them in the felling of the trees and creating tall wooden fences and a gate from the timber. All of this done in dumb show and gently mimed activity. It is done deliberately and calmly, the changes efficient and seemingly irresistibly inevitable. This may be Didirri - deep listening, in action. Onto the scrim are projected images of a house (Video Design, Sam James) dominating the landscape on a hill. The empathetic Lighting (Chris Twyman) and a wonderfully apt and 'dense' Sound Design (Phil Downing) envelope the project with atmospherics and contexts leading to a deeply immersive imaginative engagement.

Diary accounts are read or spoken. The mean-spirited cruelties and culturally misguided and misunderstood interactions between the inhabitants are acted in a disarmingly naive style. There is no real acting going on here, just gentle impressions of possibly real people recollecting their lives, casually. The point is made that the murders were probably unplanned and unexpected. There is a simple sense of quietly accrued pains and acts of petty behaviour that accidentally boil over to unsophisticated catastrophe. It is all told in a performance manner deliberately under energised, nontheatrical.

Countering this 'acting' style are demonstrated theatrical skills of a highly sophisticated kind: sculptures, painting, shadow and hand puppetry and film. A Shadow Film (Sam James) using stick puppets and voiced, projected onto a hessian bag hanging over the gate is surprisingly entrancing and the tool for the showing of the climatic,dramatic tragedy of the events. This disarming counterpointing of the melodramatics of the history with these collaborative craftmanships of childlike creativity is where the deliberate choices of pacing and image accumulations gain the shocking power of emotional involvement that draws one in unknowingly and embracingly.

Take the final gestured images invented by this company. It seems the story has ended, we prepare to thank the company, but then in modern dress, the actors carry on a kitchen table, down to the front of the space and they place chairs carefully around it and they begin to sit as if to converse, but, instead the lights fade. Here is where the project began, people sitting at a table telling a story to each other - a cultural circle has completed.

We applauded the company, they shuffled off, the house lights rose and then on a back screen - a slide show - a visual diary/record of the actual site and meetings of this company on its preparatory learning together many years ago - 2 to 3 years ago - is shown to us. One is drawn even deeper into the experience of POSTS IN THE PADDOCK, for these images reflect a shared curiosity and sense of joy, trust and brother/sisterhood that bound all these artists together and have, consequently, wrapped us up in their story telling embrace.

Before the performance, I was standing in the foyer studying a beautiful and childlike painted and annotated map arecording of the district that the events of this Governor and O'Brien family saga took place. I was introduced to Halcyon Macleod, the director of this project. Looking tired and slightly harassed, (artistically harassed, that is), she expressed anxiety about the project.

At the end of the evening in the theatre, myself and several friends waited in the foyer, hoping to catch her. For I wished, as did my companions, to set her anxiety at rest, in my own small way, and tell her that I thought POSTS IN THE PADDOCK was a gentle piece of captivating theatrical 'genius'.

A suitable development of My Darling Patricia's commitment. A distinctly unique company with the vision and patience of real artists.And that this will be a pinnacle moment of accomplishment in their history.

It seemed the personal stakes of the creators in this story of their families had made such specificity, culturally universal for the audience. Wonderful. POSTS IN THE PADDOCK, a wonder.

It will tour to Melbourne. It may be seen again in Sydney. I should wish it was, for it is great.
Posted by Editor at 9:13 AM