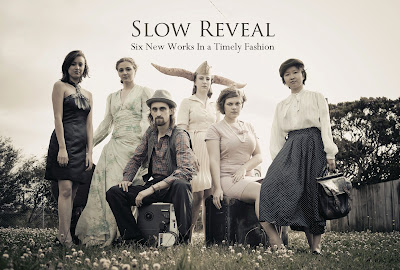 ArtsLab 11 Performance season SLOW REVEAL - Six New Works In a Timely Fashion. The Shopfront Contemporary Arts and Performance program at Shopfront Theatre, Carlton, Sydney. SLOW REVEAL - Six New Works In a Timely Fashion are part of this year's Shopfront's 5th Artslab season. The new Artistic Director, Caitlin Newton-Broad tells us "from ArtsLab's pilot residency in 2007, this is an intensive program for emerging artists to engage with their own work and also to practice within a community arts co-operative, at every level. I was lucky to work closely with these six young artists this year on Shopfront's integrated project, MACHINE ATLAS and have observed their solo process as each person has travelled from April to November, committing upwards of 20 hours per week to be on site, in research, development and rehearsal". This is indeed a generous residency both in time and opportunity. One to be cherished for its vision and commitment.

This year Erica J Brennan, Grant Moxom, Lucy Watson, Bernice Ong, Rachel Weiner and Rachel Roberts have concluded the laboratory of artistic and craft exploration with performance work for an audience under the directorship of MIchael Pigott, supported by the Shopfront team and some highly esteemed mentors: Tom Bannerman, Barbara Campbell, Katja Handt, Sam Hawker, Stephen Hawker, Jeff Khan, Rowan Marchingo, Chris Ryan, Yana Taylor and Siobhan Waterhouse. I take the effort to name the project participants to underline the high degree of professional mentoring that this program has been supported with.

Liberty to explore and the honour given to the process of art creation seems to be the primary element of the ArtsLab program. The performances, or to use the 'ugly' or cultural anathematic terminology of our corporate funders: OUTPUTS, of this exploration vary in the success that they have in the audience interaction, and although important, is, in the scheme of things, but a small part of the objective of the residency.

The most fascinating work presented, was THE SPACE HAS BEEN LEFT INTENTIONALLY BLANK created by Grant Moxom. Using volunteers from the audience (and himself) as performers, with personal mp3 players strapped to the arms of the participants and head sets, this 8 person ensemble, incorporate individual, but simultaneous journeys. Movement, choral and solo, spoken text (Shakespeare's MACBETH) is enacted and much else. The volunteers present to the watching audience, as they follow the directions of the individually timed commands, a performance that appears to be improvised both in physical and verbal patterns. Mr Moxom, a near graduate in a Psychology and Performance degree at NSW University says, "Throughout this process I have been examining the tropes of theatre and habits of people in order to generate a theatrical experience with the illusion of true spontaneity while maintaining a precise choreography of action." This he does amusingly, intelligently, with clarity and technical prowess - Mr Moxom, worth taking note of to follow his development in this interactive form. I am curious to know, What next?

Rachel Weiner's project is called HOMUNCULUS and sets out to explore "the areas of movement, light, sound, text and texture, to examine the world through the eyes of a curious and inquisitive one-and-a-half year old child". This piece revealed a wide movement vocabulary and was expressed by Ms Weiner in an absorbing and technical proficiency. The sound/music scape by Ben Garrard was a very useful element in the work. Whether this was an expression of a young girl called Gladys or not, did not seem to be of much concern to the continuity of the work. On that level it lacked consistency and clarity. As a movement/dance piece it was interesting, independent, of those terms: a successful movement/ dance work and not contextually, necessarily, the study of a one-and-a- half year old child.

Erica J. Brennan presented a work: A FEAT INCOMPLETE with fellow performance artist/actor, David Buckley. In two separate areas, Ms Brennan, dressed in a slightly archaic fashion with her head crowned with a set of large 'horns' - Minotaur like - and scooping water from a jar in a space of black desolation with a heap of coal dust that sprouts talking mushrooms, stands beside, in a parallel contemporary room space, a hip young 'scientist' (red jeans and trendy vest and black rimmed glasses), Mr Buckley, who with algebraic formulations and recordings on tape, attempt to illustrate the vital "compulsion to create a true and resonate story". In her artist's notes, Ms Brennan, extrapolates, it is an "attempt to record themselves in time and space...; to say with total clarity 'I am here' and have stories to tell". It is told, unfortunately, with a near total lack of communicative clarity. It is the performance craft, of Ms Brennan, that fails the project and undermines the intellectual conceits. Mr Buckley is decidedly more fascinating and holds  the performance elements together.  However, the objective 'what' of the piece has no clarity or clear support on 'how' to achieve that, with an audience. A lot of ideas that have not been shaped for audience entry. Have I had other, clearer explorations of this idea? Yes. Does this, at this time, add to my extension of this idea? No.

Bernice Ong has created a performance-installation called REQUIEM: an immersive performance space which we are invited to enter through a white clothed tunnel.  A chequer board  floor, white walls and roof; a tower of  seven flickering static video screens, with occasional dying cockroach images gyrating to death, opposite to which, in a white metal- framed room, a white faced Ms Ong cleans her teeth and sucks white liquid and then languorously conducts  with a violin bow a recording of part of Mozart's Requiem in D Minor. There is no dramatic impact to this work and its ideas are absorbed within the first few minutes of arriving in the space. The work lacks persuasive inclusions and is static and lacking in journey curiosity.

I commented to a fellow audience member, that the most famous monologist, Alan Bennett (TALKING HEADS) mostly (he has recorded one, himself, true) has famous artists/ actors deliver them - Maggie Smith, Aileen Atkins, Julie Walters amongst many.

Lucy Watson has written a monologue, SLIPPING, which she also delivers. Ms Watson accompanies her written text with a dexterous movement duet with a large, blue suitcase. The director has crafted a visually attractive set of lighting cues and James Brown, the Sound Designer, has created an intriguing sound scape. The difficulty with the piece as performance art for me was that the movement did not seem to clarify the text and the text did not clarify the movement, they mutually were a distraction to  the other. Choice: Do I close my eyes and listen or do I just watch and close my ears to the spoken word? As I debated with myself, the text became buried in the offers of too much activity. Who knows what was written/spoken?

The last piece, EATER by Rachel Roberts, was presented in beautiful images but the inability of the performer to engage me in the sound of the spoken language, let alone in any musical cadence of supportive "music" of the voice to communicate the ideas and narrative of the text left me wallowing in frustration and irritation. Just how much of this work's preparation, was concerned with the actual speaking of the text? However long it took to write, the performance craft of speaking the monologue needed more attention or an artist of some vocal renown: Maggie Smith or......??....

Process is the major task in this residency and the audience interaction, a brief three nights (including a preview), would have clued these artists to the necessary difference between the theoretical and performance demands of the works and what the next steps are to continue to develop the work.

Applications are now open for Artslab 12 - applications close on the 7th December, 2011; contact Saskia on admin@shopfront.com.au

A cultural initiative of some seriousness and success.
Posted by Editor at 10:24 PM