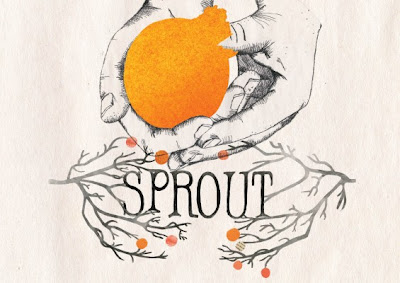 SPROUT by Jessica Bellamy is a short play of speculative fiction, occupied with a future world that has been destroyed, drought plaqued, wind blown and is clinging to the careful nurturing of seeds into 'sprouts'. Sprouts that become plants, a frog and a human. A bleak dystopian world of grim survival.

A woman (Ashley Ricardo) carefully protects seedlings in jars, spooning water into the jarred soil that progressively grow into plants, whilst contemplating her own body, as it experiences pregnancy. A man (Fayassal Bazzi) haunts her and 'hungrily' waits for fruition of his 'planted' seed. A teenage boy (Sam O'Sullivan) watches the evolutionary progress of a tadpole in a basin of water, a young girl (Matilda Ridgway) watches possessively beside him, and she bleeds into her possibility of seed growing. A chance of further survival of the human race. In the meanwhile in this seared and blustery landscape the sounds of poetic civilisation are occasionally wafted to them across the airwaves through a depleting battery radio by The Weatherman (Margaret Atwood's ORYX AND CRAKE gave me imaginative references for this world).

This is a very unusual play and gives signs that not all Australian playwrights are immured in the naturalism of our entertainments. Ms Bellamy writes in a poetic language of half remembered vocabulary. The communicated language has the difficulty of an idiosyncratic word connect and sound logic.One must work hard to catch on. The audience has to learn the new patterns of communication much like one does in the world of the Droogs in Anthony Burgess' A CLOCKWORK ORANGE. There is reward but it is an arduous task. - not for the feint hearted. Ms Bellamy challenges one and does not give much in the  way of plot or character, it is, I concluded, a sustained poetic metaphor, more focused on the language of the writing than in the usual theatre clarities.

All the actors are clearly devoted to the text and have found a world of logic through their invented sub textual thought to speak it all (remember it !) That they are preoccupied with that task of clarity of communication, the energy of the actors/characters is mostly brightly verbally superficial, an earnestness of clarifying vocal gesture.

And although the director, Gin Savage, has helped the actors solve the expression of the spoken text, the world that these characters live in does not seem to impinge on them in any deep way. The melancholy, the loss of a functional world, the desperation of survival, the emotional or physical shock of the circumstances does not resonate with much complexity. So, for me, the experience was cerebral and not at all concerning. I felt I was with actors dealing with a script rather than with people concerned with a desperate future and the necessary and precarious nurturing of surviving sprouts.

SPROUT then is for a cognoscente. I found it a fascinating challenge and the poetic gift of Ms Bellamy is indeed, rich. If this voice can find a way to help the audience to surrender faster, earlier, learn, tune in, there is, here, a new playwright of immense difference. Ms Bellamy, a playwriting pioneer or simply a poet, stumbling into this form? Time will tell. It did for Dorothy Hewett, and  it was a travail of persistence on her part for the rest of us to catch on.She did, we did.

The Old Fitzroy seems to be on a better path with the risk of this production than the boring cliche of, say, BOXING DAY, a couple of weeks ago. If you enjoy a challenge and perhaps the excitement of finding a sophisticated new voice that you can witness grow, then the sprout of  Jessica Bellamy's vision may be worth catching.
Posted by Editor at 8:43 PM