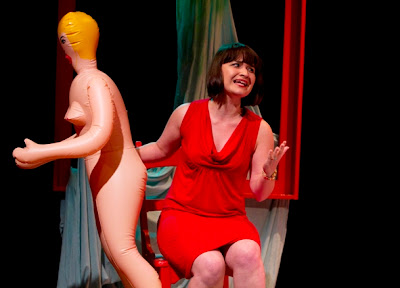 The New Theatre is the longest continuous running theatre in Sydney. This company has a long and important place in the theatre culture of Sydney (if not in Australia, with its fellow companies in other capitals, under the banner of the New Theatre).

"We dared a group of Sydney's leading and emerging female playwrights to tell the stories that lie behind the triumphs and struggles that mark women's contribution to our political, social and cultural life. It's amazing to think that it's taken Australian women 109 years to get from casting the first vote to nailing the top job. So, how far have we really come."  With this flyer blurb the New Theatre organised some eleven female writer's to offer a program and found eight women directors and forty-four actors to participate, supported by an amazing team of volunteers.

Louise Fischer, the present Artistic Director of the new Theatre, says, "I got the idea from a project I'd read about at Tricycle Theatre in London where female playwrights explored the role of women in power and politics from both an historical and contemporary perspective. This was a perfect starting for a season of new works by Australian women and an excellent way to develop our committment to new writing which has been championed through programs like BRAND SPANKING NEW, ART IS A WEAPON and NEW DIRECTIONS."

I saw the program NOW and as with all such omnibus programming the work varied in quality in all ways. The writing, the directing, the acting all revealed a wide and wild standard or quality, but the sheer energetic vision that all the participants had committed to was some compensation.

Alana Valentine's THE SEX ACT, directed by Augusta Supple, impressed me most. The research material (verbatim) on the subject of the history of the Discrimination Act has been woven well into a theatrical frame work that made it all sit together in both an informative and theatrical experience. That an actress of such quality as Odile le Clezio gave her time and talent to the project is a signifyer of belief of the importance of this programming vision, for me.

Van Badham gave us I THINK THE INTERVIEW WENT WELL MUM, and,although way below parr in quality, relative to other work of her's, the second half had a wicked sketch concerning the pitch of a production to an artistic panel of a theatre company, thinly veiled and satirically easy to identify, that ought to be seen by a wider audience - cheeky, wicked and probably (tragically) too true. The comic vision of Ms Badham, with proper discipline, could be a very useful voice in the contemporary theatre scene, it has the shock of the unvarnished truth.

The vision of  WOMEN, POWER and CULTURE, the energy of it, is not extinguished by the 'poverty' of the production values. One can offer patience when one experiences such enthusiastic passions from all involved. That this amateur company, the New Theatre, can organise this on an oily rag budget, and bring and engage such a force of concerned artists, the Sydney Theatre Company's recent program MONEY SHOTS is even more paltry in its achievements.