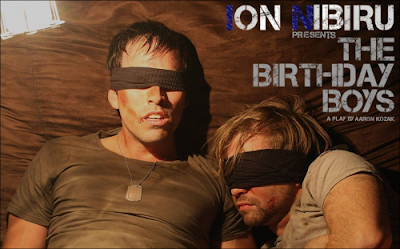 THE BIRTHDAY BOYS is a new USA play (2010) by a young writer, Aaron Kozak. It's preoccupation deals with the hyper boredom of a group of soldiers on  an army base. Three soldiers are dragged into a room, blindfolded and bound, hand and foot. We see these young men in a dazed and dangerous imprisonment act-out a scenario of personal blame, reprisal and fantasy whilst awaiting the outcome of their capture. Finally they meet an interrogator and his henchmen, they are filmed for propaganda purposes and then a threatening cross examination and actions of torture begin. What follows is a turn about of a most dramatic kind.

The first half of the play with the three blindfolded soldiers wresting out their personal relationships under high stakes pressure (Chris Galletti, Matt Hardie, Anthony Taufa), does not move forward arrestingly enough. Little really happens dramatically or thematically, and the fact that the actors are virtually faceless (blind folded) and incapacitated with binding, does not permit a clear enough dramatic identification and empathy for any of the men from the audience, despite some sense of the gallows humour of panic of frightened young men in a gruesome circumstance. A torpor of interest in the narrative and characters descends.

The interval could sorely tempt you to go home.

Do come back, for in the second half, with the arrival of the leader of the interrogating team (James Elliott), some gripping dramatic tension begins and nerve-rackingly, if narratively, slightly to familiarly, builds to a really wonderful surprise of events. Three other men reveal themselves (Nigel Turner-Carroll, Zac Drayson, Geordie Robinson) and a wonderful twist to one's expectations ensues.

The play reflects the core concerns, themes of the Sam Mendes film JARHEAD - The boredom and the danger of it, prolonged, in an unpredictable  war zone.

The performances are uniformly good, with Mr Robinson and Drayson particularly convincing in their 'dorngo' characterisations. Mr Elliott is earnestly subtle in the duplicitous role of The Leader. There is a cursory design of wooden platforms and boxes, the costumes are mostly army uniform and the lighting modest in its input to the atmospherics of the production - reflecting a shoe string budget. Darren Gilshenan has directed with an invisible hand and lets the play speak its tale without any need or temptation of a personal stamp.

This play and production for ION NIBIRU is the second for this fledgling company. SOMEONE WHO'LL WATCH OVER ME (Frank MacGuinness) presented in 2010, at the Pact Theatre, also reflected upon the behaviour of incarcerated prisoners of war. The company plans a third play to complete a trilogy of variant perspective on this exploration of the human spirit under duress. Certainly, this production represents a maturing of approach under the hand of Mr Gilshenan and one looks forward to the further flowering of the intentions and skills of this ambitious and sincere group of artists.

Maybe a commission to an Australian writer for a contemporary war play might be of interest. The absence of this subject matter from the Australian repertoire is staggering, considering the continued presence of our soldiers overseas and the family tragedies that our press-media briefly mention. After a relatively contemporary Irish and American perspective on war and its affect, the Australian experience would be an interesting conclusion to ION NIBIRU's trilogy (see blog THE WHITE GUARD).
Posted by Editor at 6:13 AM