I Have Had Enough 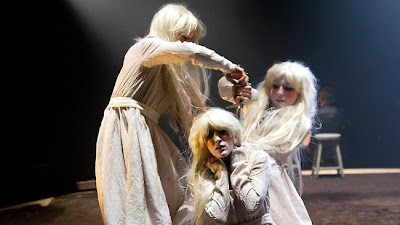 I HAVE HAD ENOUGH is the third work by this new Sydney Opera Company this year. It has been, then, considering the monumental task of producing opera, a very prolific year. It began with a new work NOTES FROM UNDERGROUND by Jack Symonds and Pierce Wilcox, followed by Leos Janacek's THE CUNNING LITTLE VIXEN, mid year. I HAVE HAD ENOUGH is the pairing of J.S. Bach's "Ich habe genung..."(1727) with a reply piece, "Nunc dimitis", musically different, by Jack Symonds with a similar text, slightly augmented with several lines from T.S. Eliot's "A CANTICLE FOR SIMEON."

The first half, by J.S.  Bach, is a straight forward rendition, given by mezzo-soprano, Anna Dowsley. The second half , the Jack Symonds score, is given by baritone, Mitchell Riley. Both sang well within the experience of two very young singers. The Bach was performed in the German and the Symonds in English, although the clarity of the libretto, by Mr Riley, was fairly poor and could really have been sung in any gibberish for its communicative effect.Nothing was gained with the language contrast as both were baffling to this listener. As to the music, I was not able to focus enough to hear it, as the stage action directed by Kip Williams, tended to muffle the music performance. Whatever Mr Symonds talks about in the program notes concerning his quest and task for this compositional juxtaposition, I could not perceive in the actual hearing of the score or make memory connections to, after reflections, later,on the performance.

In a pre-show state (Lighting Design, Nicholas Rayment), a circular lighting rig echoes a raised circular performing space, covered with thickly layered dark soil (Set and Costume Design, Emma Kingsbury). A character, dressed in black with white faced make-up with emphatic face lines around the lips, wearing a silver blonde wig, taking a cue from the music commencement, carried a black wooden ladder to the back of the stage and exited around another black robed figure carrying a stool. It was more than slightly odd to see the two principal singers labouring as scene dressers and changers in between their singing responsibilities and personas, and that they were consistently demeaned, dramatically, with this directorial decision. Their status deliberately divided between 'rulers' (gods?) and servile lackeys. I could not make head nor tail (tale) of it, dramatically.

Whilst Ms Dowsley sang her way through the Bach cantata, three blonde bewigged, white faced, long white dressed young women (Alexandra Aldrich, Michele Durman, Amanda McGregor), entered from the central passage, leashed, chained to a grotesquely bloated, hatted, 18th century gentleman (Gabriel Fancourt). The indulgence of some of the deadly sins are demonstrated in a dumb show of activity which leads to sexhausted sleep for the keeper and allows the women at last to escape and subsequently disembowel their keeper and stretch the intestines bloodily, in parody of their chains. They have been befouled in rolling in the dirt-mud in their sex enslavement and in the sumptuous gluttony surrounding a huge edible chocolate-mud cake.They are accumulative filthied throughout the action. No one is clean on this earth, I have had enough, indeed.

The women exit the stage and the 21st century Symonds composition, "Nunc dimitis", begins. Mr Riley replaces Ms Dowsley and begins the new and unfamiliar musical journey. The women return, but in this second half of the opera story, imposed on this operatic work, the visuals stay absolutely in the 18th century of Bach. After the relative harmony of the music and visuals of the first half, it was unsatisfactory for the 21st century music to be supported by 18th century visuals. It did not have comprehensible logic, for me. The women simply removed their blonde wigs to reveal brunette bedraggled hair, watched the imprisonment of their keeper in a hanging swathe of black gauze, which gave them further opportunity to indulge and wrestle with each other for more chocolate mud cake. besmeared faces and langorous tongues. The cocoa smell of the cake wafted into the audience.

More happened ........., and the singers continued, puzzingly, to swap in and out of the roles of principal singers and stagehands. The women haunted the dying man , blah, blah.....zzzzz.

Mr Williams in his program notes, tells us, "The early premise for this narrative was a reaction to the interplay between the certainty of Bach's 18th Century Christian work and the existential doubt of Symond's reply. From there, a simple blueprint for the opera's story was taken into the rehearsal room where the cast and creative team, aided by Lizzie Schebesta, embarked on a five week process of development and rehearsing."

It seemed to me in the watching of this production story that it had very little directed underlining support to the musical exploration of the composers or cogency to Mr Symonds intentions. It, frankly, became a tedious invention of gratuitous self indulgence, lacking intellectual rigour and became a fantastical investigation of regurgitated images from past theatrical history. There was an essential disconnect between the music and the 'play'. What of this text did these actors know. It seemed that they were in a completely different world to the singers. having creative fun but not much acknowledgement of the score and the librettos. Mr Williams work became a totally extraneous imposition.

Undoubtedly the design by Ms Kingsbury and Mr Rayment was beautiful. Concentratedly and with glorious detail the actors played their parts. Certainly, Mr Williams was able to conjure images of some power (If pilfered) but they did not reveal the music or the intellectual folderol that this staged double bill initiated by the Sydney Chamber opera had set out to reveal to us , the audience.

The production of NOTES FROM UNDERGROUND by Netta Yashchin by this company was an impressive debut at the commencement of the year. It set a benchmark of expectation that the latter two works have not met, equally. However, all three works were highly creditable and promising to see and experience.

One looks forward to their next work: Peter Maxwell Davies' THE LIGHTHOUSE. It is to be directed by Kip Williams, I see. I hope that the final production work of THE LIGHTHOUSE has the transparent efficacies of the Yashchin conception and that Mr Williams matches his undoubted potential to illuminate the composer's work and not his own imaginative literate indulgences.

It was, in summary, a difficult night to sit through and the musical endeavour of Mr Symonds needs to be heard without the staging for me to comprehend what he and his score were about. I am a relative neophyte in the realm of music theatre and in this case ignorance, perhaps was not bliss.

I had had enough, quite early on in this performance.
Posted by Editor at 10:31 AM