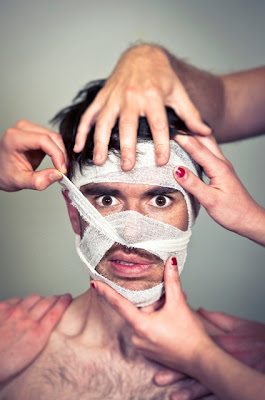 ARTS RADAR and GRIFFIN INDEPENDENT present the Sydney Premiere of THE UGLY ONE by Marius Von Mayenburg at the SBW Stables Theatre, Kings Cross.

THE UGLY ONE by Marius Von Mayenburg continues the 'trendy' love-in, in Sydney, with the contemporary German theatre or, at least, with the Berliner Schaubuhne and its artists. We have seen Mr Von Mayenburg's FIREFACE at the Sydney Theatre Company; THE COLD CHILD at SBW Stables Theatre; MOVING TARGET at the Opera House. Last year, Pearly Productions gave us David Gieselmann's THE PIGEONS at the SBW, and, of course, the Sydney Theatre Company are presenting GROSS UND KLEIN by Botho Strauss at the Sydney Theatre right now. All German. All Berlin. All the Schaubuhne.

One may feel that one has seen more German theatre than the above - and we have, (I have a slightly OK memory), for the prevailing theatre design look is heavily cadged from the German theatre history visual catalogues of the recent thirty years or so (and what's wrong with that, you may ask). Benedict Andrews has been enamoured, so has Simon Stone and the look is pervasive if not persuasive when reiterated as the consistent contemporary solution to almost every play, we have seen of late.(The NIDA Director's course seems to have that Eurocentric view as a course de rigeur, for certainly we are seeing that influence in regular work at tedium from them).

Sarah Giles, a recent NIDA Director graduate has, with Michael Hankin, a recent NIDA Designer graduate, arrived at a visual, intellectualised 'metaphor' for this production, too. The stage space has simply borrowed the interior design of the SBW Stables black covered seating, and placed it in the playing area surrounded by a black box wall. No more, no less - go figure (some of us try to). The lighting (Tom Willis) is simple and bland, in the right sense.

This fifty-five minute comedy, with an easily perceived social observation, is explosively and finely played by an extremely dexterous ensemble of farceurs: Jacinta Acevski, Gig Clarke, Eden Falk and Jo Turner. Ms Giles has guided and shaped them into a very impressive team. Ms Acevski is particularly winning, particularly clever, particularly hilarious, both physically and vocally, in a stand-out team.

What I don't get is the reason for this play's fame (a production in Melbourne last year was a sell out). It seems to me not much more than an extended sketch that really wears out its reason to occupy us, long before it finishes. It initially has a confronting and  funny premise, but it is the comic business invented and executed by this company (the Sound effects by Gig Clarke during the transformational operation of the ugly one are terrific) that sustains a lot of the mirth, of the event in this theatre, not the actual text. The satiric social observations are just regurgitated and little advance is made dramaturgically in this production, after the first thirty or so minutes. It became tiresome. I began to think that this was a German response  (a reflection?) to Neil La Bute's, THE SHAPE OF THINGS, only with less complex content.

I certainly preferred Ms Giles choice of David Gieselmann's THE PIGEONS performed at this theatre last year, as a play engagement.

Still, if you have the time and money to spare and you want to watch a crack comic team jumping through Ms Giles hoops, then go. Mr Von Mayenburg is probably over rated,I'm beginning to suspect, at least in this outing of the text.
Posted by Editor at 10:08 AM