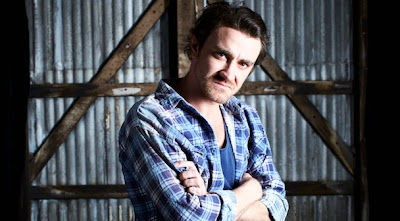 If, for no other reason, a very good reason to decide to see THE BOYS at the Griffin Theatre, is to see the acting. There maybe other reasons to go as well, but, if in doubt about going, for this play we all know, is not easy, overcome your reluctance.

The front of House team took our tickets and wished us 'a lovely night' as we climbed the stairs to our seats. A lovely night was not to be expected if one knew the play, for it deals with a very grim subject and it is famously told by Gordon Graham, fiercely, with little compromise, to reveal a confronting view of the animals known as homo sapiens. Us, and other humans like us. There but for the grace of God go I? Sandra, the mother, advises "...people in glass houses shouldn't throw stones."

The Sprague family and their spouses under what seem to be unrelenting socio-economic pressures are barely surviving. Their ability to break out of the circle of poverty seems remote and all they have is 'the family ' that they know, to rely on. The form of love that they have evolved amongst themselves is their absolute solace. The rest of the world is a challenge and needs to be made to respect them and to co-operate on their desperate terms.

The boys of the play title, Brett the elder (Josh McConville), Glenn (Johnny Carr), and Stevie, the youngest (Anthony Gee) have been nurtured by a protective 'lioness' of a mother, Sandra (Jeanette Cronin). A single parent, the husband/father is never referred to, Sandra has supervised the lives of these men with unrelenting love: "That's the greatest love there is, between a mum and her children. It's a love that never dies".

In encouraging her boys to find a way to live Sandra has vetted and attempted to train their women partners, Michelle (Cheree Cassidy), Jackie (Louisa Mignone) and Nola (Eryn Jean Norvill), to accept the patterns of the needs of the male Sprague animal. "You know, you cant help thinking, maybe when a bloke first gets out (of prison), and he's all screwed up about sex, you'd be better keeping right out of his hair, just packing him straight off to King's Cross to get it over with, with some girl he doesn't know. Better for all concerned." As the new women in this world begin to see the true nature/nurture of the boys, they start, in their own small way, to try to change things (especially the ambitious Jackie),causing frictions that ignite a gentle combustion with the boys, that will ultimately rage into a frustrated and terrifying inflammation - a bushfire of hellish destruction.

This play first appeared, on this stage in 1991, and the notorious trial around the tragic Anita Cobby case, had recently percolated corrosively into the Australian everyday psyche. The play, then, caused moral dilemma, and today, sad to say, still does. It is a glowering, cruel view of the possibility of the human being. The truth of the terror that man has the capability of inflicting on others of his kind, we constantly read about in the press and watch on our screens, and not just in history or in war zones. And when it is revealed to possibly be next door and so on our neighbourbour watch, only separated from us by a flimsy, rusting, corrugated fence, it delivers a confrontation, that is powerfully numbing.

Sam Strong, the director of this production, believes that it is not just the 'intellectual' aftermath that makes this play important and the reason to see, but the power of the visceral experience of witnessing it together as a community. Mr Strong with his designer, Renee Mulder, have invented a claustrophobic space that makes the Stables Theatre appear to be even smaller than usual. Up the two walls of the space, not only on the stage, but scaled into the audience surround, corrugated iron and rotting wooden fence loom around us. The floor of the stage is the brown desolation of real, but worn out grass, with just sufficient greenery on edges to suggest the flicker of surviving life. Sitting centre is the ubiquitous symbol of Australian suburbia, the Hills hoist clothes line (remember the burnt desolation of the family backyard in MURIEL'S WEDDING), which metaphorically spins around and around, on and on, just like the tiny planet we sit on. Furniture of human decrepitude cowers on the fringes of the space.

The Lighting Design by Verity Hampson covering indoor and outdoor locations and different time frames, besides the poetry of artistic metaphor, adds pricelessly to the atmosphere and rhetoric of the production's aesthetic and intention. The Sound Design/Composition of Kelly Ryall is complex and almost permanent, but for my experience, just occasionally over emphatic in it's affect.

The dynamite that ignites Mr Graham's grim world vision is the acting of this cast. Josh McConville as Brett is a frightening force of enraged primal machismo, with a slow fuse burning throughout the play to ultimately reveal a reckless ruthlessness and torment driven to lash out at anything to satiate his feeling, his innate knowledge of his own puny qualities. Mr McConville appears before us in a terrifying transformation of character embodiment. Every inch of him, seemingly every fibre, is quivering with transformed belief. This performance is a life force of contemptible blind evil. Mr McConville has not shied away in any capacity to reveal the power of real human ugliness. For the aesthetes of the actors craft, Mr McConville as Brett Sprague is an exemplar par excellence (consider his bewildered patient, this time last year in the STC's IN THE NEXT ROOM, OR THE VIBRATOR PLAY. The contrast is astounding).

Anthony Gee as Stevie, has also found a character to completely identify with and has broken through his usual self-consciousness into a fierce ownership of all the fragile and clueless idiocy of the indulged runt of the litter. Mr Gee's sense of possession is a reward for his relentless practice at his craft - his constant efforts on the fringe productions (check his bio) has paid off, in this instance. It is exciting to watch actors blooming. This is what Mr Strong demonstrates in his direction of all these actors, a sense of trusting them as fellow collaborators with a sublime confidence in the writer as the source of his and their artistry for the primal need of telling story to the collective tribe in this corroboree space called the Griffin SBW Stables Theatre. Mr Carr as the middle brother, Glenn, too, finds the gathering power of his character in the opportunities of the second act, under the eye of Mr Strong.It grows to an impressive and sad statement of a character collapsing under peer pressure from the possibility of escape with Jackie from the Sprague web.

The play despite been called THE BOYS is really an alarming study of the women that surround these men. The complexity of the reasons the women are with these men at all is pitiably evoked with deft and subtle gestures of the acting craft signalled from a close reading of Mr Graham's text. The second act of the play reveals the acute sociological observations of Mr Graham's writing and Ms Cronin, Mignone, Cassidy and Norvill bravely layer the work with painfully gained insight and empathy for their characters. The hideous poignancy of the concluding lines of act one from Sandra: " All you can do is be patient, that's all. Take comfort from knowing that while they're out there doing what their doing, they're probably thinking about you. At least some of the time." is chillingly absorbed by us, retrospectively, as we imagine what they have actually done out there. (All of the action, as in the classic Greek theatre mode, happens off stage.)The gratefulness we have when Nola, reclaims her son from the arms of Sandra, the BOYS' mother is palpable. Though, as we sit in the Griffin Theatre today, we have recollections of Jackie Weaver’s "Lady Macbeth in stretch pants" in ANIMAL KINGDOM and we know that not a lot has changed in our world.

It is chilling, is it not, how vicariously interested we are in this world as Australians? In our recent mainstream popular entertainment: WOLF CREEK, ANIMAL KINGDOM, SNOWTOWN, THE LOVED ONES, and UNDERBELLY, for starters. The cultural, sociological politics of the relationship between the sexes in Australia, interesting to contemplate, in how our fictional constructs stay occupied, mesmerized there. The recent revival of another Australian classic, Ray Lawler's THE SUMMMER OF THE SEVENTEENTH DOLL kept underling the sexual politics of this play as I watched last night. Gentler, for sure, but how much different?

A good play, a wonderful design, exemplary ensemble and individual acting, and a director's hand that guides actors through a text without the necessity to auteur himself, makes this a challenging but a not to be missed theatre experience. It should, as well, grow more and more confident in its taut control of the space and audience.