ACO 2012, Tour One: Chopin and Mendelsshon 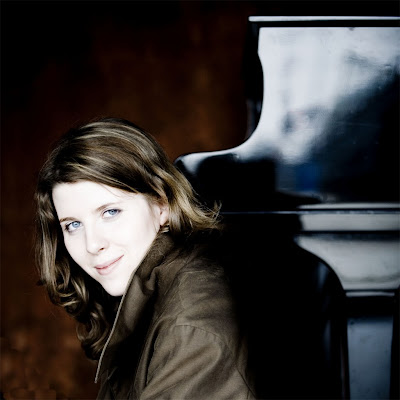 No matter the undeniable skills of Ms Leschenko I was flatly unmoved or connected to the Chopin. Similarly the Mendelssohn Octet for strings in E flat major, Op.20 failed to sustain my interest. Whether it was the choice of music or the playing, or me on the day is what I have been asking myself.

On the other hand, the Gorecki Piano Concerto (Concerto for Harpsichord, or Piano and Strings, Op 40) -1980,  played thrillingly and relentlessly by Ms Leschenko was simply electrifying. A mere 8 minutes long - the pianist and the music seized one and took us into a breathless concentration. The historical and political placement of this composition - in the Polish struggle for self rule amidst Russian occupation gave the work gravitas and deep resonances.

The Ennio Morricone Esercizi (Exercises) for 10 solo strings No.1 (interrupted melody and improvised canon), an example of the exploration addressing the 'problem', how to interrupt or change a melody in a systematic way, so that its gradual fragmentation becomes the very point of the pattern making? Morricone has admitted, despite his fame in his film music scores, "For myself, I can do without a melody. In fact, I've often tried to disguise a melodic theme by adding rests and pauses and silences, and to encourage the listeners to identify  with the sensations of sheer musical colours, instead of with a tune ... " In this Esercizi, Morricone has concentrated on a few fleeting fragments from a famous moment in Verdi's LA TRAVIATA , the scena 'Arnami Alfredo ' . The result was a curious and attractive enticement. Strange, weird and still fascinating.

The short Paganini / Tognetti CAPRICE ON CAPRICES (DEVA) was a brief and tanatlising entry to the day's music.

The new, the modern music interested me in a way that the Chopin couldn't on this occasion.

A new season of adventure, and exploration in music with the ACO has begun. Unexpectedly tentative, for me, but with trusting expectations for the concerts to come.
Posted by Editor at 9:14 PM

Have to agree with you on the Chopin. I watched it in Melbourne a few days ago. Very unsatisfying. For someone who is supposed to be a "Chopin specialist", I dislike her style, I dislike her use of rubato, I dislike her lack of rhythm. I would go further than what you said to even say that she does not seem to have enough finger strength as opposed to arm strength, thus the running passages lack spark nor depth. I was very disappointed with her ruining one of the best concertos ever written.