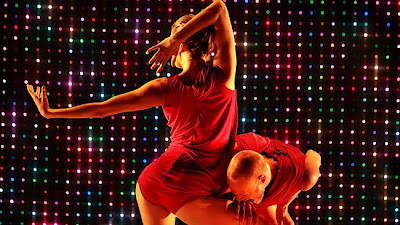 Sydney Dance Company presents 2 ONE ANOTHER at the Sydney Theatre at Walsh Bay.

2 ONE ANOTHER is a new work, choreographed by Rafael Bonachela, for the Sydney Dance Company.

This work has all the hallmarks of Mr Bonachela's first major work for this company, 360 Degrees, which was presented in the massive space at Carriageworks. The major difference is the visual scale. 2 ONE ANOTHER is pitched in a more intimate, human scale. The subject explored is that of relationships. The exploration is that of the solo, duo, trio, quartet and so on to the ensemble.

In the Sydney Theatre this new work has been confined/defined by the black masking - width, depth and height. A proscenium width pixilated screen covers the backing space, and although impressive does not dominate or distract from the action of the dance. It has constant imagery and variance of colour and is an alluring invitation to immerse oneself in the work. Tony Assness, is the Production & Costume Designer and also the Creative Director of the Screen Content which was Designed and Produced by Iloura. It is a powerful ingredient to the work (Mr Assness talks specifically about his costume design in the program and I felt it worked least best with the shapeless red, second set - the costume hid the contours of the bodies and often draped in distracting rouche curtain like plunges of material in action). The Lighting Design by Benjamin Cisterne is sympathetically dynamic and frames, focuses the work of the dancers work beautifully. The Music score manipulated by Nick Wales from a diverse extant repertoire, "from new classical music to Renaissance and Baroque landscapes, rich soundscapes and driving electronica" that includes Murcof, Peteris Vasks, original composition by Mr Wales himself, propels the work forward. The score for this production a relief from the work of the usual composer favoured by Mr Bonachela. 2 ONE ANOTHER has all the dazzling tools of popular hi-tech stage event and some contemporary dance company styles.


I am always fascinated by the interactions between people and as I spend time in the studio with the dancers I can't help but see them as a microcosm of broader human interactions. ... During the creative development phase of 2 ONE ANOTHER I invited poet and writer Samuel Webster into the studio and asked him to write instinctively and with immediacy in response to what he was observing. …From that text, exercises were set as a basis for tasks and explorations for the dancers.

The outcome of the dance/text process is absorbed into the whole and apparent only in an abstracted manner through the inclusion of some of the phrases into the score - (not much of it survives or is clear. There are quotations of Mr Webster's inspiration throughout the FREE program we were given!!).

The dance begins in an exquisite ensemble moment. All the supporting elements of screen, lighting, costume and sound reveal the 16 dancers in a standing configuration in the space. The lighting is low and the movements begin slowly to the understated sounds of the Murcof: "Oort". The company move as one, sway, and begin a gestural exploration resolving itself progressively into full body movement. The design elements are fluid and add to the complexity of the experience. As an audience it had, for me, a transcendent beauty and the adrenalin rush of watching began to pulse. The work proceeded into configurations of the dancers in range of solo, duet, trio etc. The work is close and the explorations are sculptural, grounded.

The work never got more effective then that opening.

I find the Bonachela dance aesthetic one that rarely lifts the dancers into the space. Literally walking flat footed and de-energised to positions from the wings to positions on the floor before launching into a physical dance dynamic. Similarly stopping mid stage and then devolving to a walked exit. This applied energy contrasts seem to disconnect me to the impact of the flow of the piece that in contrast, had a brilliant and relatively engaging, evolving image, light and sound through line . I see the choreography as a series of separate images. There is no energy through line from the dancers- no passing of the baton of revelation and continuity. I feel that I am watching 16 independent dancers, I never feel that they are a spiritual ensemble. Each had their self on show and not deeply subservient to the spirit of the work or presenting a Dance Company - ensemble.

I felt that some dancers gave 100%. Some less. A work is as strong as the weakest link. There were too many half committed gestures for me (even a loss of concentration and a fall). That a dancer like Chen Wen was so dynamic and technically brilliant through the whole of the demands of his choreography always lifted the work of Mr Bonachela into clarity. Mr Wen's work and technical brilliance was the bench mark of excitement for me. One sought him out in the group work. The contrast around him was sometimes starkly significant. Not all the dancers revealed, on the night I attended, a consistent sense of the whole or the driving creative energies of an ensemble. It was still a work in parts. I was not moved by this work. I did not care for anyone or was engaged with any intention of the work.

Hey, I know not enough about dance to be an expert. But I do know that when I saw the Nederlands Dans Theatre 1 in Melbourne last year that I was watching a great company in great choreography. I was so moved that I went twice, on two heart stopping, consecutive nights. I know that The Australian Dance Theatre from Adelaide has never been less than compelling. Twyla Tharp, even on Broadway with a commercial work like COME FLY WITH ME - amazing, dazzling. And although in a different realm of Dance, the visit by The Paris Opera Ballet a few years ago, unforgettable. Now there was an ensemble.

Of many of the reviews of 2 ONE ANOTHER that I have read two reviews, one by Jill Sykes in the Sydney Morning Herald and the other by Deborah Jones in The Australian are contrasting in their response. Both are experts in this performing art expression. I would have to stand behind Ms Jone's response as the one closest to mine. Check them out.
Posted by Editor at 9:36 PM