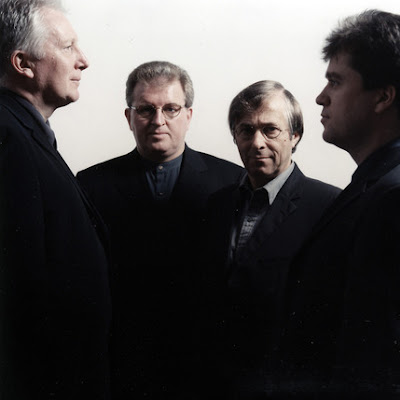 The Australian Chamber Orchestra in the chimerical secular cathedral of the Concert Hall presented The Hilliard Ensemble in an astute and educative curation of music.

The religious origins of some of the repertoire of the internationally esteemed guests, Sheryngham's "Ah, Gentle Jesu" (Ca. 1500) were highlighted alongside especially commissioned work by Hilliard from a Russian composer, Alexander Raskatov, "Obikhod" (2002 -2003), referencing the traditional liturgical chant books of the Russian Orthodox Church for string orchestra and voices (with a struck bell effect) finishing, without a break, a soulfully beautiful rendition of another commissioned work, sung Capella, from the Estonian, Arvo Part, "Most Holy Mother of God" (2003).

The former consists of five parts and is performed in the old Slovenian language. It is a kind of 'chamber requiem' of 24 minutes duration, taken from texts of the Orthodox requiem mass. The Arvo Part is of great transfixing beauty. In the program notes Alex Ross, an American music critic, says Part  "... has put his finger on something that is almost impossible to put into words - something to do with the power of music to obliterate the rigidities of space and time. One after the other, his chords silence the noise of the self, binding the mind to an eternal present." Based on this performance, true.

In the second half of the program the Gregorian chant and French Medieval settings of "Veni, Creator Spiritus" were interleaved with the Ross Edwards 1993 composition of the same title. Mr Edwards was present and the work was gentle and mesmeric in its religious utterings. The juxtaposition of the Hilliard Ensemble singing the verses of the chant and the two simple movements of the newer work were a great success.

To open the concert Elgar's "Serenade for strings in E minor, Op.20" (1892) gently prepared us for the 'holiness' of the music that was to follow. The concert concluded with "Variations on a Theme by Tchaikovsky, OP. 35a" (1894) by Anton Arensky, a Russian composer rarely heard. The work was in response to the suicide of Tchaikovsky and had a gently but deeply affecting aura of meditation.

This carefully curated concert,highlighting the gifts of the Hilliard Ensemble, was a return to musical pleasures that one can treasure , especially. The ACO back to form after the disappointment of the First Tour of the Company this year. Great and secure, again in anticipation.
Posted by Editor at 9:23 AM