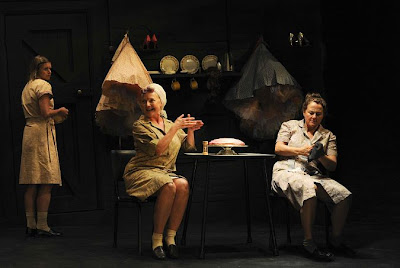 The Irish gift of the 'gab' is once more on display in Enda Walsh's THE NEW ELECTRIC BALLROOM at the Griffin Independent Theatre and Siren Theatre Co's Sydney premiere presentation of this play.

Words, words, words. None of these characters are shy with language. Talk, talk and more talk. It is even remarked upon by the characters in the play!!!

In an Irish tradition that harks back to Oscar Wilde, the inimitable Mr George Bernard Shaw (recently, PYGMALION), Synge, O'Casey and of late, Brian Friel, Edna O'Brien (HAUNTED), Conor McPherson and Martin McDonagh - at least - these magic storytellers fleet back for us as a memory-bank backup as THE NEW ELECTRIC BALLROOM  flickers into life for us at the Stables Theatre.

Three sisters living in the isolation of a fishing village on the bleak and dashing coast of West Ireland, buffeted by the winds and oceans of the Atlantic recall their sad memories about the mating game that was exemplified for them in the nearby, nearly mythic New Electric Ballroom. Breda (Odile Le Clezio) and Clara (Genevieve Mooy) recollect for their younger sister Ada (Jane Phegan) their preparations, adventures  and disappointments with cake, biscuits and a promise of tea in an attempt to create a successful wooing hope for her with  their regular visitor,the fisherman, Patsy (Justin Smith).

A fairytale story as grim as the Grimm Brother's have spun, or Hans Christian Andersen delivered, as object lessons to life's possibilities, is what Mr Walsh weaves for us, today. Rooted in a backdrop of harsh environmental, black and white photographic reality - the rough seas seen through the open doorway -  it shifts easily into the black walled cave of  these women's world with the gently surreal activity of dressing and making up in the costume of a ballroom, and the sexual destinies imagined and hoped for there, that ultimately elevates, with the recognition of the inevitability of the sadness of the fated destiny of these women, into a kind of metaphysical magic - of powers, beyond our control, that are contrived, (by who or what ?), to test us. Us, through the stories of Breda, Clara and Ada and Patsy.

I began the experience of this play feeling resistant - "…oh, another Irish blarney gab fest" - but through the skill of the writer and the deftly wrought and devoted performances of the actors, and the subtle support of the artistic team: Set design, Tom Bannerman; Lighting Design, Verity Hampson; Composer/Sound Design, Daryl Wallis, under the sensitive and disciplined direction of Kate Gaul, one is seduced into the music of  the text and the wealth of the imagery and the  human anguish for the disappointed souls that Mr Walsh clearly aches for, and loves.

It is a pleasure to see Ms Le Clezio and Mooy working with such rich and extensive gifts and opportunities as this text offers them (as it was in seeing Helen Buday on the stage in BABYTEETH at Belvoir). Their theatrical experience shines through in their connectedness and craftsmanship. Ms Phegan, out of the realm of the devised verbatim world of Version 1.0 (e,g, THIS KIND OF RUCKUS), that one is accustomed to see her in, brings an understated freshness to the tribulations of Ada, the youngest of the sisters. But the most affecting performance is given by Justin Smith, an actor of a disarming presence, accompanied by a delicacy of choice in action with an envious armament of verbal skills, highlighted by a deeply moving and amusing rendition of song. His Patsy is a gentle gem of the art of acting, worth catching.

It is indeed rewarding to see Ms Gaul with a text that she clearly loves, working with a small and select team of actors, that she does not need to teach, reach such persuasive allures. Siren Theatre Co under the proselyting ideals of Ms Gaul has of late, AS YOU LIKE IT for example , worked with a large company of actors to tell her stories. Those companies have not always been as evenly talented or experienced and the work  was thus, sometimes compromised in the desired result. Here, there is no weakness and the integrity and skill of the vision of Ms Gaul shines through.

THE NEW ELECTRIC BALLROOM is worth catching.

This Irish tradition of  playwrighting that, though rooted in realities, can lift into the metaphysical world for contemplation, hardly finds its way onto our stages through the Australian heritage or contemporary practice. Peter Kenna in his imperfect plays,  THE SLAUGHTER OF SAINT TERESA'S DAY and A HARD GOD maybe, is the last of that Australian tradition, of storytelling blarney. Though, come to think of it, Dorothy Hewett has the blarney and metaphysics in spades: from the flawed but experimentally interesting  early play THIS OLD MAN COMES ROLLING HOME to the masterpiece of THE MAN FROM MUCKINUPIN (I also love THE FIELDS OF HEAVEN).  Jessica Bellamy and her very interesting SPROUTS intimates that possibility. Eloise Hearst (DIRTYLAND) and Maree Freeman (PICTURES OF BRIGHT LIGHTS ) as well. Let us see what happens to their writing. In the mean time the Irish lead the way. Remember TERMINUS by Mark O'Rowe from the Abbey Co last year at the Drama Theatre at the Sydney Opera House? Ah, well.
Posted by Editor at 9:15 AM