The Great Lie of the Western World 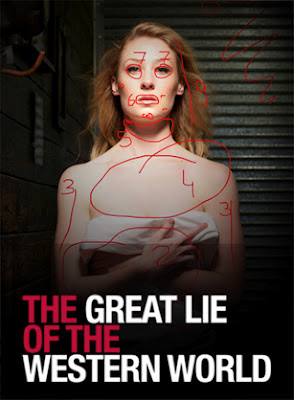 Cathode Ray Tube present THE GREAT LIE OF THE WESTERN WORLD by Alistair Powning with Michael Booth at the Tap Gallery, Darlinghurst.

THE GREAT LIE OF THE WESTERN WORLD is presented in an acting style that I would describe as an attempt at realistic-naturalism. A kind of expression of minimal states of body and voice. The emotional intensities are scaled down but true. In this intimate space at the Tap Gallery it works well. It might be best used for camera. The four actors of this company are, still, persuasive in their efforts. I was interested in their technique. The acting is the best of the night in the theatre.

A couple, Simon (Alistair Powning) and Fiona (Kate Skinner) living and saving for the ordinary stabilities of a contemporary life are visited by an old friend, Emerson (Michael Booth) and Paige (Jessica Donoghue). Emerson "unpicks" the couple's "familiar domestic existence, forcing (them) to confront a series of existential questions." Or, a mate, with sociopathic tendencies, turns up at a mate's house and attempts to help him retreat from his gambling addiction. Again. Who needs help the most? The resident or the visitor?

Who is Emerson , really? A real person or a surreal vision come to guide this man to health and safety? To bring Simon safely back into the forgiving arms of Fiona and then buggering off into the ether with Paige, who may be an escort or prostitute or spirit companion to Emerson?

The great lie of the western world it seems is the idea that we are free. Free to choose what we want et cetera, et cetera. The playwriting has the formula of domesticity and ordinary exchanges in hand, "Do you want some cereal?" How about a drink?" "Let's dance." but the philosophical importances of the writers' pre-occupations still require much more subtlety to be palatable. In several scenes, conversations take on such unrealities of sledge-hammering indoctrination as to be primitive and objectionable within the given circumstances of the characters lives. It is really a credit to the acting belief and skill of the performers that it almost circumvents the need to vent about the writing, whilst sitting there.

Cathode Ray Tube is a collective that produces their own work. It is great that they are doing it. No Director is credited. I reckon an outside eye might assist in bringing constructive criticism to the fairly primitive drafting of the text. It may have potential. At the moment this play is not really ready for discerning audiences.

Man is born free, but he is everywhere in chains - Jean-Jacques Rousseau.

This is a famous quote from a great thinker, quoted in the program for the Cathode Ray Tube performance. Now, how do we translate that to be the basis, the thrust of a play? THE GREAT LIE OF THE WESTERN WORLD at the Tap Gallery has not managed to do it.