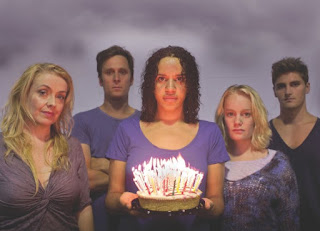 LYREBIRD by Amelia Evans is a new Australian play. It was developed at the National Institute of Dramatic Art in 2010. It is a short(ish) one act play dealing with the effect of natural disaster on the lives of community and family. In this instance, bushfire. The guilt and despair of survivors of such catastrophe in the face of immense devastation and the human imperative to begin again is at the core of this work.

Simply, but with an empathetic comprehension (observed or known first hand?), Ms Evans movingly has us join a family, Cate (Sara Zwangobani), Henry (Christian Willis) and their daughter, Jess (Maeve MacGregor) at the wrecked site of their fire destroyed home, where the task of reclaiming and rebuilding a life, both materially and spiritually is under progress, but is under great emotional siege and looks in jeopardy. June (Lucy Miller), a friend of the family has come to share in the remembrance of the birthday of her daughter, lost in the inferno, and is a catalyst to the emotional revelations. Tim (Jordan Kelly) is a young man of the district, a survivor and friend to all.

The play is, in form conventional in its structure, but, has an eloquence of truth and pain that is exquisite in its expression. In all of its observed accuracy there is a poetic sense of order with a gentle and sly eye for the small comic foibles of the familiar - of family and close friends, as a veneer for us, the audience, to release into, to be able to endure the almost unbearable.

Unfortunately, the production is not as sure as the play. The Director, Jemma Gurney, has not been able to draw a consistency of playing energies or level of belief from all her cast and the disparate communication skills allows the audience to escape the full impact of the writing. Ms Zwangobani and MacGregor have that consistency of detailed truthfulness and technical communication, moving; Mr Kelly a simply honest response to all around him, easy to believe. Ms Miller, in a very complicated task, veers between a deeply convincing inner life but technically fudged, speedy delivery of her text. In the silent moments one sees June best - all the pain of June. The word delivery, on the other hand, is swamped with emotional subtext and is scrambled and unclear. Feelings and no clear thoughts or information for us to understand her better. Mr Willis seems uncomfortable and tends to self affect to solve his work.

The Set Design by Gez Xavier Mansfield is imaginative and dares to break into symbolism but is not sympathetically lit by Sara Swersky and has, under the direction of Ms Gurney, a wayward and inconsistent control of image and space direction. Mr Mansfield's set is over lit and rarely is the design possibility achieved. This lack of directorial surety is true of the Sound Design/Composition of Nate Edmondson, as well, which is emotive, sometimes, obvious and contrived for sentimental affect.

On opening night LYREBIRD was a very good play not yet fully supported by Ms Gurney's direction of the other elements of the enterprise.

I remember someone saying once (was it Richard Wherrett?) - and I believe it to be true - that new plays really need the most experienced directors to give them as great an opportunity as possible to succeed. Give the young directors the classics to hone their skills – the tried and proven for them to exercise their talents and learn – the good writer will support them. The young writer will be supported and enhanced by the experienced director.

In both recent endeavors of the new writing put on at the Old Fitz the weakest element has been the directing. As a result the writer's work has not always been easy to see, encumbered as it was/is by inexperienced directorial choices. I am not sure of the essential quality of the writing of Ms Wolf in her offered work: THE IMPORTANCE OF BEING EARNEST DRAGONS AND OTHER CLASSIC TALES AS TOLD BY AN OCTOPUS, although, I perceive there is the possibility of a writer for the theatre there. I am sure, however, that LYREBIRD is a fairly sophisticated achievement of observation and reveals a skill in writing in this difficult form. But neither writers is served well enough by the fledgling skills of the directors and one wonders whether these plays will be seen elsewhere under more mature directorial hands. If ever.

The history of new Australian plays is littered with examples of young play-writers careers truncated by inept production and direction. Good plays lost to the one production that was really not a proper reading of the potential of the material or competent leadership of the other artistic collaborators. Putting the writer with the best director ought to be part of the curatorial brief of the Old Fitz artistic team surely,(or supplying an experienced 'mentor' to guide the production throughout the process), if the nurturing and presentation of the new writer is the company “ethos”. At the moment it does not seem to be fair to the writer. It is, from my point of view as an audience member, not fair. And is it fair to the hard earned reputation of the Old Fitz as a consistent venue for the Tamarama Rock Surfers presentations? Is this venue a workshop venue or try out space? Knowing clearly, would give the audience a better sense of what to expect to discern whether to spend time and money there or not.