The Story of Mary McLane by Herself 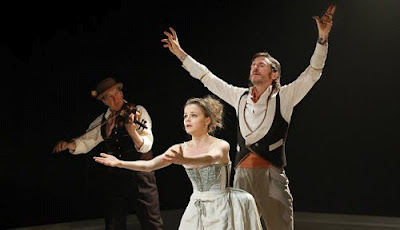 Griffin Theatre Company, in association with Malthouse Theatre, Merrigong Theatre Company and Performing Lines, present Ride On Theatre's THE STORY OF MARY MACLANE BY HERSELF by Bojana Novakovic with Tim Rogers, after the writings of Mary Maclane at the SBW Stables Theatre, Kings Cross.

RIDE ON THEATRE is a company co-founded by Bojana Novakovic and Tanya Goldberg. The work that the company has presented over the past few years has mostly been curated from interesting international writers (WAY TO HEAVEN, AN OAK TREE, DEBRIS, FAMILY STORIES etc), engaged in highly important social and historical issues. Challenging and worldy in its focus ( - maybe self-consciously). THE STORY OF MARY MACLANE BY HERSELF is the first new Australian work that I have seen from them. Ms Novakovic writing and acting, Ms Goldberg, Directing.


"Our initial encounter with Mary MacLane was brief, a small segment from her first book. But its power was unmistakable: immediate, direct and bizarre, it left us struck with adoration, awe, and an odd sense of kinship. She may have been writing over a hundred years ago, but her use of language was original, startlingly contemporary, and shamelessly revealing. A teenager from 1902 writing of things that mattered to us, (barely out of our teens) in 2004."

"More than one hundred years ago. THE STORY OF MARY MACLANE set America aflame. A shocking confessional from a 19-year-old girl who refused to succumb to the corset-bound prudery of her age, Mary's scandalous memoir broke all the rules - and sold over 100,000 copies."

A dapper gentlemen (Tim Rogers) dressed like a poet of the late 19th century (more like a song and music player in a vaudeville music hall - Costume and Set Design by Anna Cordingley), with two other musicians, Andy Baylor and Mark Harris, introduce and conduct us with musical song comment through the trials and tribulations of Mary MacLane who appears on this faux music hall/vaudeville stage for our delectation:


"Ladies and gentlemen, I assume you've heard of the First World War? ' The War to End All Wars'? I'm sure you are familiar with Rockefeller? Carnegie? Pulitzer, Poe and Twain? Well, even before these men were busy being famous, ladies and gentlemen - Roosevelt, Edison and Clarke - inventing all sorts of material contraptions and money conceptions, let me tell you ... there lived a woman the likes of which you have never before happened upon. The likes of which you have not met in your time.

Dressed in period underwear with scruffy coiffure Mary MacLane (Bojana Novakovic) appears before us, revealed, with the drawing of theatre curtains, sprawled on a chair, with grooming implements, and she addresses us, after acknowledgement of out presence:

I, of womankind and certain years will now set forth as full and frank a portrayal as I am able of myself, Mary MacLane, for whom the world contains not a parallel.

I am convinced of this, for I am odd.
I am distinctly original, innately and in development.
I have in me a quite unusual intensity of life.
I can feel.
I have a marvelous capacity for misery.
I am broad-minded.
I am a genius.
I am a philosopher of my own good peripatetic school.
I care neither for right nor for wrong. My conscience is nil.
My brain is a conglomeration of aggressive versatility.
I have reached a truly wonderful state of miserable morbid unhappiness.
I have attained an egoism that is rare indeed.
I have gone into the deep shadows.
All this constitutes oddity. .....

.... I am not good. I am not virtuous. I am not sympathetic. I am not generous. I am merely, and above all, a creature of intense passionate feeling. I feel everything. That is my genius. It burns me like fire.

In this portrayal bits of my heart will be broken off and given away. .... ... Welcome to my little old life tragedy. "Thus speaks, spoke, Mary Maclane. Then she continues: " I grew up in Butte, Montana..." A song outlining the highlights of that place, with the auto-biographical recollections of Mary's endurance, follows.


What is interesting, and, for me the clue to this work is, the actor, Ms Novakovic does not assume an American dialect that might be applicable to Butte, Montana, but talks to us as Mary, in Ms Novakovic's, particular Australian dialect, all through the night. It is the 'voice' of Bojana Novakovic. Later, in the midst of heaping confrontations in the 'adventures' of Mary's life, Mary complains, still in the voice/sound of Bojana, of the the play and the actor playing her:

My words have been taken, without my permission, and moulded into an insignificant theatrical trick, to suit the petty tastes of intellectuals. ...You see only an impression. Worse! An impression of an impression impersonated by an impostor. One who has never had her soul hurled into the public sphere and laid bare for all to scrutinise and laugh at. She is a stupid, pompous, pretentious actress." Mary storms off stage, and returns with a bag belonging to Bojana, that is, Ms Novakovic, and we are introduced to the personal diary of the 'pretentious' actress herself : "Bojana Novakovic, 2011. Twentieth of April. ....


The identification that Ms Novakovic and Ms Goldberg had with the work of Mary MacLane, as relatively young artists, as told to us in their notes to the production, is revealed. They, as contemporary artists, have always carried the lofty possibilities and responsibilities of their contribution to the conversations of their society (in Sydney, Australia, the World), and were unafraid to trumpet it (RIDE ON THEATRE COMPANY demonstrates that self belief) despite the hearsay and sometimes critical denigration of those about them. They are, demonstrably, intelligent, gifted and uncompromising and, so, to the status quo about them, challenging (difficult), stupid. For Ms Novakovic and Goldberg, Mary MacLane represents a type of heroic role model, an example of the frustration of being a clever woman in the world, even today, still, in 2012. Novakovic and Goldberg to some are unpleasant, mad, bad and dangerous to know because they dare to espouse a view of the world that their brothers and patriarchs have done, without impunity, all of history. And whereas, those brothers and patriarchs have been rewarded for their 'effrontery', not so the female of the species who have had the temerity to call a spade a spade, and dig into the full experiences of being alive in the venal world around them as freely or as honestly as their fraternal artists have done. And such is the confrontation to their outspoken position, even today, that self-doubts and fears of being neurotic and narcissistic, are real concerns (different degrees of intensity, perhaps) for these two women as it was for Mary MacLane, and others of their like-wise  'femaleness', that dare to think, speak and do something about it.

That this production can be received by different parts of the audience as inspiring, liberating, confusing, ridiculous, or boring may rest in the preparedness of enlightenment we personally are able to admit too, with figures like Simone de Beauvoir, Germaine Greer, Naomi Wolf and other outspoken  'feminists' - Novakovic and Goldberg, for instance.

Try THE STORY OF MARY MACLANE BY HERSELF and be tested as to where you might stand in benign understanding.

However, another reason other than the 'political' one for the difficulty of accessing this work in production; for all of us to get it, together, as it unravels, is, possibly, that the dramaturgy is almost to self knowledgeable and not sufficiently clear for the audience. It feels severely obfuscated and, so, not enough clue is given to the double 'act' (trick) that is going on, early enough, or, consistently enough for it to be transparent for the audience to enjoy the conceit of the work. This is both, in the writing and the performing. The personal journey of Ms Novakovic and her gradual revelation that this work is not only a detailing of the historical angst of the 1902 Mary MacLane, but, also a parallel contemporary expression of her own, a young clever (feisty) woman's experience in April 2012 - today! - is not easily absorbed while witnessing it.

It could also be in the technical emotional expression of Ms Novakovic that seems in performance, to intellectually hover about the decision on whether to indulge the doing of it. Rather, I feel, she should just dive deep into the embodied experiencing of it, in all the moments. It seemed to be restrained in its manifestation and so in delivery, denies us the full force of the angst, pain of the two women, Mary and Bojana. We can see something is going on, but there is, almost, an intellectual, deliberate restraint from the human/animalistic expression of it. The performance is, then, for some, not wholly convincing or even cogent.

Tim Rogers as the guide and counterpoint to the evening, is charming and suitably joyful, deliberately aloof from the convolutions of Mary. The musical arrangements are all reminiscent of a vaudeville style that transports to the 'fakery' and yet delight of the period of the original time sphere. The music composition is nostalgic and fitting to the chicanery of the writing intentions.

THE STORY OF MARY MACLANE BY HERSELF is then flawed, but, immensely invigorating, despite that. It certainly should lead to very volatile discussion and disagreement after. What theatre should be, then. Something that stays with you vitally, well after the lights have dimmed and the theatre emptied.

Every woman needs to deal with it- will delight in it. Every contemporary man must deal with it. Go see for yourself.

Even all these years later, Mary provokes - particularly around her home key: matters of identity. Thank you for this view!