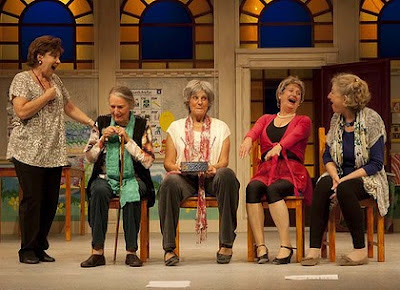 See what I mean? Insight, less than thoughtful. Maybe, poor. Zilch, perhaps. No matter his declaration in the program notes: "...I am as fascinated by them (meaning women) as when I emerged from my mother's womb. Vive les femmes!" Discerning women may not wish to reciprocate with a "Vive Monsieur Reid!"

CODGERS was an entertaining and slight piece of writing made deliciously engaging by a group of actors of some real 'codger' age and remarkable, pedigreed, acting backgrounds (first round cast, that is) - skills to burn, to be inherited. These biddies, bar one of the actors, are at least a decade too young for what they purport to be (their pedigrees as actors are formidable, though). What worked for CODGERS as an entertainment was the sheer collective chutzpah of all the right-aged performers. It charmed, distracted, the problems with the writing, away. Unfortunately, that is not the case with this productio/play. No matter the chutzpah of the ladies of this production, they cannot hide the deficient writing.

There is a play called SIX CHARACTERS IN SEARCH OF AN AUTHOR. With respect to Luigi Pirandello for connecting him with this work, BIDDIES feels, in production, like SIX ACTORS LOOKING FOR A PLAY. The educated spinster (Maggie Blinco), quoting apt poetic lines from the masters ; an incontinence sufferer (Linden Wilkinson)who has a secret history of brutalisation at the hands of her husband; the amateur musical star mom (Donna Lee) who wisecracks awful jokes and has a relentless need to "hoof' and sing at any signal, still - the song and dance finale should be featured on RED FACES, just for the costumes alone!; the daffy incompetent home crafts lady (Annie Byron), long suffering, who finally gets her husband to pay some attention to her; the 'bossy-boots' manager of the group (Julie Hudspeth) who discovers concessions to others is not such a bad thing to do; the tyrannical school teacher(Vivienne Garrett) from their past and the truth speaker without an empathetic button, are all here stuck in a room, at least a little of the time.

On chairs spread across the room decorated with infant school drawings etc (Set and Costume Design, Graham Maclean - ordinary), the director, Wayne Harrison plots his actors through the well-worn hoops of the writing, ploddingly, predictably. Nothing but basic craft here – but considering what has been happening with the productions presented by Tamarama Rock Surfers at the Old Fitzroy Theatre ( THE IMPORTANCE OF BEING EARNEST DRAGONS AND OTHER...; LYREBIRD) and The Bondi Pavilion of late (KEEP SMILING ! THE HOUSEWIFE'S GUIDE), (and lets not forget EVERY BREATH) – it looks like genius. Mr Harrison can move his actors around and light his set and actors with his designer Nicholas Higgins so that we can see what is happening. I just wish he was more rigorous with his writer: just tell him to go back to the desk and start again.

To be fair, this is 'Horses for Courses' stuff and the morning I saw it the audience were gently appreciative if not effusive. It is a bit like watching live on stage ON THE BUSES, MAN ABOUT THE HOUSE, THE RAG TRADE or ARE YOU BEING SERVED? without the male characters, although they figure prominently in the background action of these characters worlds (unlike the women's place in CODGERS, by the way) - low, low comedy with an occasional sentimental gesture to make it 'soapy' and 'real'. It is very lowest common denominator.

I know that this is Australian content. I know that it has a cast of six women and I am glad for that.  The second one in a row I have seen - KEEP SMILING! THE HOUSEWIFE'S GUIDE, also has six women on stage, but these actors should not be asked to struggle with this banal writing, to put life into such ordinariness, to give themselves the chance to do what they love -to practice the craft of acting. Unfortunately you are only as good as your weakest link. The centre of any theatre/film/television work is the writing, if it is no good, you cannot make a silk purse out of a sow's ear. For BIDDIES the writing is the weakest link and it does not need an iceberg to sink it. Put these gifted and talented actors in an Alan Ayckbourn or a Joanna Murray-Smith - e.g. THE FEMALE OF THE SPECIES or .... ? but give them writing worth working with and give the audience some credit for intelligence and the capacity to enjoy the highest common factor of the best that there is about.

The most amazing thing about this production is to watch Vivienne Garrett take charge of a role written for a woman much, much older than herself, I should suppose, and give it a damn good shake. It is a remarkable piece of observation and detailed choice. Thorough and inspired, right through from the costume and make up, (love the shoes) to the physical gestures : body, and, especially face; and a clarity of voice work bristling with theatrical intelligence and mordant wit. One of the better performances I have seen this year. Ms Garrett can make this DROSS seem like GOLD. (Why isn't she centre stage at the STC? She has been away in Perth, BUT, she is back. And HOW!!!)

But then, of course, Ms Garrett is playing the school teacher, so she has an advantage over the other actors, for, Mr Reid tells us that he had, as a younger man, chosen school-teaching as his profession, and there is a feeling of some authenticity to the writing of this character, some knowledge of the acerbic teacher, a kin to Celia Johnson's Miss Mackay from Marcia Blaine in THE PRIME OF MISS JEAN BRODIE, instead of the cliché caricatures of the other biddies he has written (Ms Wilkinson is a playwright for goodness sake, she might have been able to help. Didn't anyone ask?).

Thanks for the effort, but, really , there has to be better Australian writing than this, surely?

This year has not been a good time in the theatre so far. Reward for an enthusiastic theatre lover has been scant. It can be brutalising. We are only a quarter a way through the year. Time, still to be astonished. It is why I keep going. I love it and I long to be transported.

I was expecting something completely different from this play. My expectation (or hope) (and i don't know where i got it from) was that this play, with such a title as "Biddies", may present intelligent women with something to say about life and womanhood in the elder years, perhaps give some insights which may be unexpected and surprising, and perhaps challenging.
Instead we got a worn and somewhat mean joke about incontinence and grown women hiding in a broom closet.
I left the theatre thinking, the characters were nothing like the intelligent elder women i know in real life. I learnt very little from the play and i think i agree with you it had nothing to do with the ability of the actors, who did a great job.
I can't say i didn't enjoy the play completely, as i enjoyed the performances, and i might have been seen to have been tapping my feet to the music, but it's just that i had a simultaneous sense of disappointment that it was not challenging enough for me.