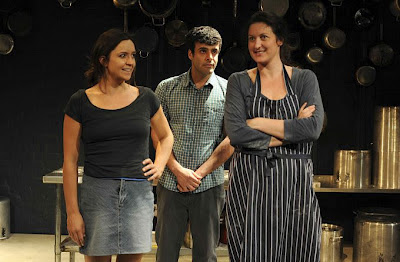 FOOD by Steve Rodgers, directed by Steve Rodgers and Kate Champion of Force Majeure, is just that thing, that elusive but striven for experience, that I explained, in my last theatre blog, was the reason why I so persistently attend the theatre, despite often, huge and many consecutive distresses and disappointments. FOOD is a tiny jewel, a gem of an experience. In a company publicity promotion, that I received from Belvoir, today,written by Simon Stone, FOOD is described as "a feel good" production and the reason to see it. It is that, and I urge you all to see it, but it is so much more as well.

Simply, the play concerns two siblings, recently restored, reconnected, working in a remote take away truck stop, food place - of deep fried food disasters. One, the returning sister, Nancy, played by Emma Jackson, convinces her resident sister, Elma, played by Kate Box, that she ought to put her outstanding culinary skills into a higher frame of ambition and to set up a gourmet or specialty eatery-restaurant - Australian Classic Style! Despite the mutual suspicions and judgements of each other's lives they take a plunge to join up and change their circumstances, perhaps. To do so they need help, and so they meet, interview and entrust an itinerant, passing refugee, of Turkish origin, Hakan, played by Fayssal Bazzi, to team with them in the joint effort. He is, not only handy in the kitchen and with the customers, but, also, a source of passionate promise to both the women. Handsome, witty, charming and deftly wise, clever. This reads like the script of many a kitchen-sink, family melodrama, Yes?

So, what is especially pleasing about this work is the huge development of the writing frameworks, styles, that Mr Rodgers has made. SAVAGE RIVER was the last play of Mr Rodgers that I have seen and it was nominated for the Sydney Theatre Awards for Best New Writing of that year, 2009. And, although that work was haunting, evocative and often, deeply uncomfortable, it was the acting and the created environment of the production, by Peter Evans, that mostly illuminated those experiences, transcended the very familiar style of the HOME AND AWAY writing - a very conventional and too familiar structure of naturalism - old fashioned style .( There was nothing wrong with that, let me assure you, just a little too comfortable).

FOOD explores a variety of writing techniques, and switches from one to the other, and back again. Normal duologue scenes, between characters; direct solo monologues to the audience; descriptions of action in the third person as if reading a novel; an interactive conversation, by all, with the audience. The fourth wall is evoked, is shattered, is climbed over, walked through etc. It is these simple shifts of style that keep the audience chasing the play and immersed in solving what is happening and creating the contract of communications. It is fun. We have seen these techniques before, as well, and it is the inconsistency of the styles that is the delighting contract. We all, at my performance, bought in, opted in, to go with it.

Besides that, Mr Rodgers has invited Kate Champion from Force Majeure to co-direct with him. Ms Champion has a plethora of creations where she has worked with actors/dancers/movers to create work of her own - my favourite being THE AGE I'M IN (2008). Here, Ms Champion guides, almost choreographs, some of the physical life of the performers to tell, alone in gesture, some vital information of character and plot, or, jointly with the spoken word, to evoke more complexly the depths of the 'plain' speech of the people. It is subtle and woven to the style and skills of the actors, their character developments and the plot impetus.

The opening section with the two sisters bumped into a 'grind' by the score, gradually focuses onto Nancy as she joyfully moves to the music, but, later, backed against a wall, her movement becomes a more fearsome and fearful 'thing' of utter agony and possible depravity. Rape? Interwoven hand gestures between characters speak, elsewhere in the craft of the direction, and underline dramatic telling. The sleep on the floor becomes a supremely subtle narrative of the growth of a relationship, in tender and exquisite patterns. Achingly understated and breathlessly created by the audience, with invitation, in high hopes of bliss, for a blissful ending.

With the narrative variety and the stylised movement patterns blended and contrasted with a naturalistic pose of voice and body, the work in FOOD becomes more than just a "feel good" experience but one of various artistic triumphs. STOCKHOLM (2010) produced at the Sydney Theatre Company, with the movement studies from an English Company, Frantic Assembly, was a recent example of this trendy shift and exploration of new form. The  FOOD company have had the work composed around their skills and character needs, and do not seem to be imposed upon, and so appear to work more comfortably than it did with the STOCKHOLM actors. Neither of the two actors in STOCKHOLM were part of the original production development and the choreography felt imposed and not organically arising from the impulses of the characters or actors. In FOOD, the actors seem to relish the " actions".I wished, that Ms Champion and the actors had gone a little further, but that is just a matter of taste, and maybe time.

Another of the interests for me, in the writing, was the manner in which tragic and dramatic issues were presented, but did not become the preoccupation of the play. The gang rape of a young woman, for instance, is told in recollection, simply told, not judged or dramatised. Rather, we are made to understand, it happened, was dealt with, as best as possible in the circumstances, and life moved on. It is part of the life tides here in this town. High and low tides of nature. As shocking as it seems to us, the audience, in our city slicker privilege, and although we see the real consequences around this and other revelations, this family, this community just move on, adjusting to the cards dealt to them. Gillian Mear's book, FOAL'S BREAD, one of the Miles Franklin nominated novels for this year, deals with the same attitudes to the events and inevitabilities of a hard and tough life environment and reveals, demonstrates, that the moral compass may need to be sometimes a little more relaxed, even overlooked. For nature will make its call, and , believe it or not, we will endure and survive - one way or another.The consequences will depend on your own personal strength. An experiential reality for some cultures. It seems it is so for Elma, Nancy and Hakan in this restaurant, in this country town.

As in SAVAGE RIVER, Mr Rodgers writes of people who have disappointed hopes, who have the need to accommodate themselves to diminished expectations, and the pressures of coping with the fear that the reality of social or personal chaos is more than they can bear. We see the struggle these characters have with the melancholy undertone of their conscious lives.

Ms Jackson's Nancy is a coiled, wounded young woman, who has the fortitude not to bow to pessimism but to struggle to find the way to a better life. Her performance is muted in expression but explosive internally. The vivid contrasts of the outer and the inner gives us the room to identify and endow our well wishes to her survival.The depths are dreadful but they will be harnessed for good. All that Ms Jackson does highlights the character's journey and struggle.

Mr Bazzi as Hakan, makes a breakthrough impression. One has seen him many times before (THE PIGEONS, K.I.J.E., and SPROUT), and it was always interesting but the work, here, is assured, free and comically complex. The actor has taken off. The wit of the mind of this man, Hakan, is sexy and it explodes all around the women and the audience - we are all seduced. The restraint in the physical presence is exasperating in its visual promises, and holds us all in suspense with high hopes. It makes the ending of the play a surprise and a tease. The ending leaves the audience deeply curious and in opposing places of knowledge.

Kate Box as Elma, confirms even more for me, that here is an actor of enormous gifts. Her work in this production is like a stealth bomb. It moves along, and along comfortably and well. It is assured but appears unremarkable, then three quarters of the way through, it reveals itself as exploded, for  I suddenly began to cry for Elma. One has subtly been hooped to this woman's life and one cares for her, deeply, desperately. The craft and art of Ms Box is almost invisible, and its outcome is tremendous. Ms Box :A witch with magic tricks!? Maybe, the tears were also in wonder at this actor's  powers. That power serves the character and the play with unheroic accuracy,depth and naked candour. Look back at her work, for instance in TENDER, or, even THE BUSINESS, last year, upstairs at Belvoir,and you will recall something significant. Later this year Ms Box is tackling Strindberg's Miss Julie at the Darlinghurst, I can hardly wait.

It is the integration of sound by Ekrem Mulayim, beautifully composed and placed; the set and costume design, Anna Tregloan and most especially, the lighting by Martin Langthorne that complements the endeavors of the other artists astonishingly well. It is a labour of devoted love it seems. An ideal that the technical artists at the recent Tamarama Rock Surfers shows (KEEP SMILING! THE HOUSEWIFE'S GUIDE; LYREBIRD, for instance, but not alone), should watch and learn from.

FOOD, in the Downstairs is the show to see. It has been a while for me to be so forthcoming. A small work, jewel, but a near perfect one.