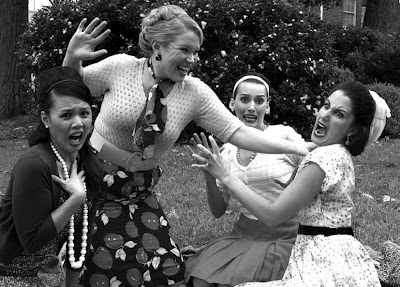 
The Colour Blind Project is the brainchild of Sydney based performers, Josipa Draisma and Stephanie Son, created to showcase the diverse pool of multi-cultural talent that exists in Australia. …The Colour Blind Project unites artists of all backgrounds, particularly performers of multi-cultural backgrounds, and gives them the opportunity to create and perform work that will spark public dialogue about the cultural diversity within the Australian Arts and Entertainment industry.

These young women, (wonderfully, six women), the creators, have set about with some superficial diligence to reflect on the circumstances of the women of their grandmother's generation - the 1960's (the program notes suggests the fifties as well, but the key dramatic and political turning point of the play - the Vietnam Conscription Lottery, did not occur until the sixties). To show us victims not prepared to buck the system but rather to smile and bear it. Satirical comedy is the dominating tone. On a bright and iconically detailed design that reflects the commercial images of the period, with a popular magazine backdrop dominating the procedures (Set Design, Daniel Alleck), we are invited to watch six women, amusingly dressed in eye catching costume of a period (Costume Design, Virginia Mawer), who epitomise some aspects of the feminine culture of that time. We meet a limited range of women and a small range of issues - a dash of Mad Men office sexual liaisons: the too secure rich 'bitch'-alcoholic (Carla Nirella) and the ambitious sexy office secretary (Naomi White); the Vietnam soldier's wife (Alyssan Russell) at home with four kids to care for; the deserted green grocer's wife (Christina Falsone) having to keep up face in diminishing financial circumstances; the trophy wife (Stephanie Son) of an up and coming politician and a woman (Josipa Draisma) who is hugely incompetent in fulfilling her housewifely duties.

The form of the writing, sketch like mutations of situations with surface textual investigations, that aim for comedy and satirical gleams over and above realities, supported by kitchy choreography and recitations from Shakespearean heroines (that do not always seem to be relevant, except in a generalised way) seem not to have the integrity of the ambitions of this company's stated aims. So little pressure to this spotless surface of fun and games is applied by these artists that the cracks which they purport, in their program notes, to lurk beneath, that apparently run "deep and echoless", do not. Gentle poking fun and laughter is what is mostly sought. I wonder if this company have ever read the Clare Luce Boothe play THE WOMEN or seen the George Cukor 1939 film? Now there is wit, comedy, satire perfectly conceived.

The real 'meat and potatoes' issues of the period other than Vietnam, which we do get a melodramatic allusion too, such as the draft dodgers and the Moratoriums on war; the World Peace Movement and the Anti-Nuclear Movement, the White Australia Policy and the diverse multi-cultural refugee arrivals (a subject that The Colour Blind Project would seem to have naturally really dealt with in a more assiduous and penetrating way, given this opportunity of period examination, I would have thought), pregnancy and birth control and the collapse of the churches (Vatican Council) in their authority to rule the home front and intimate women's lives; the diet pill (the notorious Ford Pill, for instance), the  other legal and illegal drug industry; the revolutionary popular culture of fashion, sex,  and rock and roll (no Beatles or Rolling Stone in the Sound Design? ! (Sound Design expertly prepared by Garth Hodgson with some real detail and care); the new Utopias: women's liberation - The Female Eunuch etc; indigenous and gay rights (another area that The Colour Blind Project ought to have been more scrupulous about, even in passing!); the culture of terror (assassinations!) and doubt in the government structures, cultural paranoia; the space race for world domination; Russia and China and the Red Menace of Communism, for instance, are not regarded at all.

What we do have is some persevered passion and a sense of play. Hearts and the ambition of this company seem to be in the right place, if nothing much else. Comedy and satire, song and dance are in the harder areas of performance and need accurate technical skills. Without them the work becomes very hit and miss. Here, in this work, it is mostly miss. The voices of the company generally lack projection skill (Ms Russell and Falsone exceptions), particularly in this very peculiar and difficult space. If there is to be dance, especially in ensemble it needs real skill and synchronisation to have the right fillip of effect. If the coup d'theatre is to be in a set piece of mimed chaos at a luncheon party to climax the play as a final symbolic statement, it needs physical timing and ensemble sensibilities of a high order. This company are not near that standard to satisfactorily pull it off.

Felicity Nicol, the Director, does not have the essential skills to organise and stage her performers other than in generalised patterns and in a generalised focusing of textual essentials. There seems to be a preponderant attention to the funny quirks of her actors and the mildly amusing jokes rather than the illumination of the textual points of the writing - such as they be, at present (was there an outside dramaturge? When did the director become involved in the creation of the work?) Often the actors are physically upstaging and covering vital action for the audience's comprehension. Ms Nicol's ability to guide her Lighting Designer (Liam O'Keefe) to cover and focus the key performers in each of the scenes is woefully absent. I was often not able to see the key players in the work (the tragic news for the soldier's wife of the death of Vietnam troops could not be seen. Surely the focus ought to have been centred on Ms Russell in that long and extended moment?) I thought lighting was meant to light the actors. Here, it is mostly too dull/underlit to know what the directorial intention is on the stage. It is a director's responsibility. It is a similar issue that I had with Jemma Gurney's work on LYREBIRD at the Old Fitzroy last month. Basic technical skills of the director are not at all honed or are neglected - maybe a time issue ?! Stage practicalities need attention.  The basic craft! Boring as it may seem, no matter the theory or ideas of the production, ALL is lost if the communication of it is inept.

Tamarama Rock Surfers have curated this show and given an opportunity for a young and ambitious and enthusiastic company the chance to present to a Sydney audience and once again we are seeing work that I think has potential and possible merit, but is under prepared and does not seem to be properly mentored. The work needs more attention in the writing, in my view. It needs casting that can fulfill the brief of the material's technical demand, and a director with more technical knowledge to achieve the technical finesse required.

KEEP SMILING ! THE HOUSEWIFE'S GUIDE is mainly for friends and family of the performers.
Posted by Editor at 10:24 AM

I saw this play recently, and I'm sorry, but I have to disagree - if not with what you're saying specifically - at least with your attitude. This seems to be a long, nit-picking rant rather than a review of a show that exhibited some truly laugh-out-loud moments, that dripped with satirical commercial veneer and wove together a number of female archetypes, played by some very talented up and coming local theatre makers. I do not know any of them personally, I went as a random punter.

It's all very well for you to sit in your comfy theatre chair and criticise, and criticism is helpful where it's due. But it's a shame you think this piece of writing should serve as a record, for 'history's' sake, when it is such a negative, high and mighty interpretation.

But don't the crew have all their friends, family and the publicist and marketing team, and all the tabloids to say nice positive and encouraging things to them about the show?

At the very least negative feedback can help draw lines between your own values and the critics.

Just wishing people wouldn't say negative, unpleasant sounding things is a bit lame. A bit of argy bargy keeps us all on our toes don't you think?

Its much more interesting to hear people talk in detail about what made a show good, bad or both. That would help us as readers to appreciate what it is we are interested in, and to appreciate the achievement that good art is.