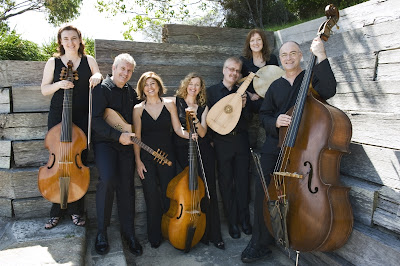 
One of the frustrating things about being a musical performer outside the all pervasive popular or rock genres is that invariably one gets stuck with the label 'classical musician' with all the negativity this can entail. The US music critic Alex Ross commences his book LISTEN TO THIS with the following sentences: " I hate ' classical music' : not the thing but the name. It traps a tenaciously living art in the theme park of the past... The phrase is a masterpiece of negative publicity, a tour de force of anti-hype. I wish there was another name." I could not agree more! I feel very much part of a contemporary, tenaciously living art form and do not believe that I belong in a museum - or at least no more than a 65 year old rock musician touring the world playing the 'revolutionary' music he or she was famous for circa 1969 !

In one of the smaller concert halls of the Sydney Conservatorium of Music, three members of MARA! and four members of THE MARAIS PROJECT gathered nervously but profoundly alive, and, with the living breath of their fervid concentration, spent some of their contemporary time into bringing to life music, some of it written and first performed 600 hundred years ago, in a concert that was startlingly fresh and exhaustively human. I sat in this room and felt the fervour of these musicians with their instruments and voices, and was vividly reminded me of the nervous creative energy of contemporary musical geeks of the computer generated musicians and their passions, sounds, at concerts that I have attended in these same halls. I felt that this concert was as 'contemporary' as the concert that I was anticipating later that very day: Steve Reich at the Opera House. In fact this live music was new to me and so, technically 'modern' to my experience. That the music was being played live, makes it, for me, just as tenaciously a living art form as the work I was to hear later that day, by a living composer. And in the same way, the music of the Reich Concert was so familiar, that it was, technically, a rendition of a 'classical' repertoire of that composer that was to be heard.


"The cantiga de amigo is a genre of Iberian medieval poetry (written in the voice of a woman, to an absent lover), and this is the only example to have survived with music. Written in the northern Spanish dialect of Gallician-Portugese ... it features seven short poems, six of which were set to music (one appearing with blank staves)."

The sixth poem, which appeared without the music, has been set by Mara Kiek (contemporary composition!). Mara Kiek using her distinctive voice, along with the musicians, embody these poems with such passionate fervour that one is transported from the world of the musical ache of the past to the present day,where one is living and throbbing with the same problems and needs. Other songs by anonymous composers were presented, as well  as a work by  John Dowland: NOW O NOW. The pieces by Marin Marais revealing the magic of the settings for the mix of period and contemporary instruments (double bass) were deeply thrilling and moving.

This was a concert that I discovered accidentally in the calendar of events in the weekend Sydney Morning Herald. One that I was glad to have been able to hear. In fact I bought the CD and have re-lived the concert all during the week. Highly recommended. In the program notes, an editorial in the Newsletter of The Marais Project & Sounds Baroque protests the paucity of Sydney Festival opportunities for 'Classical music' in their programming:


"Thirteen years of promoting concerts for The Marais Project has convinced us that Australian audiences enjoy and attend classical music in its many and varied forms. They will embrace rarely heard performers such as Marais alongside new Australian music. This fact seems unfortunately to escape some arts bureaucrats, festival leaders and policy makers."

After hearing this concert and been entranced by the CD during this past week, I am indeed sad, that I did not know of this concert practice before, and can only encourage other music listeners to discover MARA ! and THE MARAIS PROJECT.  Really worth it!
Posted by Kevin Jackson at 5:40 PM