A Return To The Trees 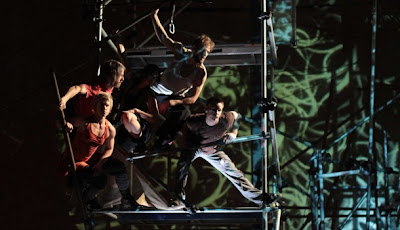 Carriageworks presents A RETURN TO THE TREES. A new work by Strings Attached in Bay 20, Carriageworks.

A RETURN TO THE TREES devised and performed by the company Strings Attached is a new work supported by Carriageworks as part of their commitment to supporting emerging practice from NSW companies.

Strings Attached is a group of artists whose common aim is to create and perform innovative physical theatre that challenges and transforms their audiences by reflecting upon the mystery of human nature. [HMMMM!?] The company was formed in 2007, incorporating contemporary dance, physical theatre, aerial acrobatics, contraptions and multimedia to create a unique style of storytelling that engages the audience on a deep emotional level.


A RETURN TO THE TREES was performed on a complex, towering, 8 metre high scaffold structure of re-usable steel tubes and aerial systems that are operated entirely by the cast. The performers/collaborators were Rick Everett, LeeAnne Litton, Kathryn Puie, Tim Ohl and Lee Wilson. It was directed by Alejandro Rolandi and choreographed and co-directed by Paul Selwyn-Norton, Devised by Alejandro Rolandi and LeeAnne Litton. A non-stop physical dance on scaffolding featuring the quintet of performers, breaking down to couplings of three and two and solos. The agility and skill was amazing to watch, the sustained physical prowess and fitness making significant impact. LeeAnne Litton especially in her extended harness 'dance' transcended the mere physical dexterity on view, to become a work of beauty. The abstract construction of the movement of body in gravity defying harness was unforgettable

An altogether 'hokey' story element and "artist's statement/story" had been formulated to give the work some kind of raison d'etre:

A Return To The Trees investigates the psychological transformations that society may experience as a consequence of technological advancement, over population of the planet and climate change.The process of creating this work spans a pivotal period in our lives, as we come to terms with the fact that some form of climate change is now inevitable. As we continue to relinquish grass and grassroots for concrete floors and social complexity - replacing natural environments with artificial ones, we can see foresee a reality where nature is only accessible to us like wild animals in the zoo.

How would it be to live in a world without forests?

A RETURN TO THE TREES tells a story that transcends cultures and socio-economic groups by stripping down accepted social environments to an unfamiliar place where survival is more important than custom. Set in the lowest echelon of a futuristic modern society where the earth's surface has been devoured by human expansion, we explore what it is to be a human being. This project is a direct development of three years of investigation during which Strings Attached has created its own vocabulary of dance-theatre…


Oh My God! The spin quoted above, is an agony to read, and worse, to watch the consequences of it on the work. The dance-theatre worked fairly well as a set of abstracted pieces. It seemed to me the spin weight of the above guff forced the performers into sustaining a z-grade sci-fi film scenario of competition and struggle for supremacy, and for 'mating' survivals, with patently pained forcing of 'acting' and 'emotional' journeys that were hard to sustain, and worse, hard for the audience to believe or even care about. Why did the screenplay from AVATAR keep coming to my head? …resonating - but not pleasurably? Why did I think that the technical skills and beauty of this work was diminished by the imposed framework? Devaluing the beauty?

The costuming was comic-book 'futuristic' in look and one appreciated the need of function to dominate (Pamela McGraw); the lighting was atmospheric through the haze (Nicholas Rayment) while the visual component of the projected green patterns were less than interesting (Chris Wilson) and were hardly the " large scale immersive projections to create an apocalyptic vision" we were told had been developed. The music by Benn DeMole was underwhelming in its contribution - ultimately dull and repetitive.

The technical work from the choreographers and dancers/collaborators was worth the experience. Strip away the silly narrative frame work and give us the abstracted choreography and the committed concentration of the performers, and a much more pleasing work may be had.

I, certainly, believe in the three years of skill development and physical dexterities shown here, but if it took three years to come up with the raison d'etre for the work, the framework of sci-fi drudge, (how many socially relevant buttons can we push here to justify the work?) then, this is the area where more effort must be made - this aspect of the work is patently woeful and ultimately distracting.
Posted by Kevin Jackson at 1:59 PM