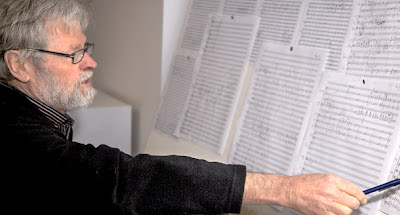 The Sydney Conservatorium of Music presents a Special event: ROSS EDWARDS, MARQUEE 101 at the Verbrugghen Hall.

Two weeks ago I attended a contemporary classic music concert at the Sydney Opera House. The composer at the centre of that event was the American, Steve Reich. It was a wonderful, a great experience. Finding this concert's happening in a 'remote' by-the-way note in the Sydney Morning Herald I felt for many reasons, but especially, out of a sense of cultural redress to the Australian composer, that I should go, should attend.

As I mentioned in my blog, recording The STEVE REICH IN RESIDENCE - A CELEBRATION event, I am a relative newcomer to the music world as live performance. I like it a lot (perhaps, as a respite from actors talking to me, of which, I hear and see a lot - have heard and seen a lot). I have had introductions to a number of Australian Composers: Peter Sculthorpe, Richard Meale, Brett Dean, Elena Kats-Chernin, Richard Mills and a little of Anne Boyd, others, too - of late, Nick Wales, especially through his CODA CD's.

I have heard more Ross Edwards than the others, I think. Why? I think it has to do with what he described as the sound of the "otherness" or more definitely the "Australian-ness" of his musical composition - even without, he self deprecatingly remarked the other evening, the didgeridoo, been used. The music nearly always takes me to an Australian contentedness, for the sounds can be imaginatively inhabited, by me, into a personal Australian vision/narrative, as I listen. My landscape is awakened, all my senses are aroused, even, and especially, startlingly, my olfactory memories - the bush.

The use that Mr Edwards makes of the percussion is especially evocative for me. One of my first immersive classical music experiences was as a spot light operator at an outdoor season of Beth Dean's (just recently, passed away) choreography, somewhere in the Shire (1970 or 71), of John Antill's CORROBOREE (1950) - distant memories.(Keith Bain had 'shanghaied' me from my first year NIDA classes - it may be the reason I passed movement studies!!!). It being a season, I heard it a lot. So, as I untangle, Mr Edwards' compositions, I have come to realise, they propel me back to an ecstatic but nearly forgotten time of hearing the Antill music.

The first piece we heard, the other night, was BINYANG for Clarinet (Peter Jenkin) and percussion (Daryl Pratt) and it, with the first 'hit' of the percussive 'sticks' took me, back, to that place again: in a lighting tower, high up in the air, on a summer evening being enveloped by the percussive and evocative score of Australianess as I watched, below me, the weave of the dancers in the dance, anxious not to miss my first light cue! Australian eucalypts all around me in the park - the perfume of the night.

This concert arranged by the Conservatorium of Music in Sydney was a Marquee Concert to honour the presence of this composer within the institution, this year, and to world premiere a commissioned Piano Sonata, played by pianist, Bernadette Harvey, as part of the up-coming Celebrations of the 100th Anniversary of the Conservatorium of Music. The composer introduced, generously, a short program of 7 'quotations' from his huge repertoire, beside the new Piano Sonata. It covered some thirty odd years of work, all of it, here, played in chamber scale. Like the Reich concert the focused artistry of all the performers was remarkable. Besides the three already mentioned, the celebration was carried out by Alison Mitchell (flute), Claire Edwardes (percussion), Genevieve Lang (harp), Jenny Duck-Chong (mezzo soprano), Ole Bohn (Violin) and Christopher Mui (cello).

Mr Edwards spoke generously, from prepared notes, about the context inspiration of the works. The Marimba Dances, for instance, coming from an Indonesian music embracement; The LAIKAN for flute, violin, cello and percussion (we heard the 2nd and 3rd movement (Madagascan song), inspired by a Madagascan-African folk song, the source recording played for us before hearing his own interpretation, version. Influenced by Indonesian and African music, just like his contemporary, Steve Reich, I thought.

He recollected his inspiration of the sounds of the Australian native birds and insects at Pearl Beach and The Blue Mountains as being the imaginative springboard for some of his work. Just like Olivier Messiaen in his life environment, I thought. The complex intricacies of inter-connection of the remembered imaginative and real life of the composer brought the work alive in an enhancing international 'movement' of creation well springs.

I wonder if the curator of the THE COMPOSERS at the Sydney Opera House (and Producer, Classical Music), Yarmila Alfonzetti was there? For the work of Mr Edwards was as interesting and arresting as Mr Reich's, (different, without doubt). The modest scale of production that the Conservatorium has at its service highlighted the different CELEBRATION, honouring, the impact and work, in these two different houses, of these two 'brothers' in contemporary music.

In that exciting proposition that The Sydney Opera House management has proffered with THE COMPOSERS, one hopes that the Australian Composer, especially the living ones are similarly celebrated. Peter Sculthorpe, for instance. A living legend. I felt rewarded being near the greatness of Steve Reich, and so did I in the presence of the professional modesty of Ross Edwards, the other night.

It would be an honour to be in the presence of Mr Sculthorpe in a special program similarly scaled and curated as the Reich affair in the Concert Hall soon, would it not?

I have never forgotten the excitement with which I heard Ross Edwards' music for the first time.
This sounds like a great occasion - you were lucky to catch that ad buried within the paper!
Thanks Kevin.