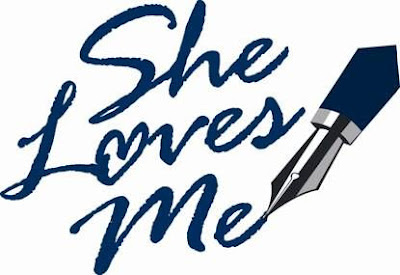 This is my second visit to the Neglected Musicals presentations. ON THE TWENTIETH CENTURY, performed in March was my first (check out my response).
SHE LOVES ME is a gem of a show. Sheldon Harnick, lyricist; Music by Jerry Bock. Harnick and Bock. These artists for a dozen years, that stretched over the sixties produced seven Broadway shows: THE BODY BEAUTIFUL (1958), FIORELLO! (1959), TENDERLOIN (1960), SHE LOVES ME (1963), FIDDLER ON THE ROOF (1964), THE APPLE TREE (1966) and THE ROTHSCHILDS (1970).

SHE LOVES ME (Book by Joe Masteroff) is an adaptation of Miklos Laszlo, an Hungarian playwright's play, PARFUMIERE which  has been the subject of three films, the best, undoubtedly, for me, being THE SHOP AROUND THE CORNER with James Stewart - Margaret Sullavan (1940). It is set in a shop and concerns the staff and their travails, especially that of salesperson, Amalia Balash (Emma Copperthwaite) and her double relationship, one face-to- face and another one, a letter-to-letter lonely-hearts exchange, with her boss, Georg Nowack (Shaun Rennie). This is a charming compact musical, where the songs come out of the character and the developing plot thickenings. It has a breezy, gentle, joie de vivre.

Under the direction of Nicholas Hammond (he of The Sound of Music movie) this company lovingly presented this work. Mr Rennie as Georg, always has a special way with the music - singing, and his conviction as an actor, completes a very strong impression. Tyran Parke as Mr Steven Kodaly, the 'baddie', was assured and suave and Christopher Horsey gave a delightful, endearing character reading of Mr Ladislav Spiros.

I thought this Musical was a pleasant surprise and would enjoy seeing it with full production. A chamber piece of urban/folk whimsy settling on old fashioned values.

Credit should be acknowledged to the craft and musical direction of Craig Renshaw and his little band, Adrian Bendt (violin), and Oliver Simpson (bass).

Look forward to the next one.