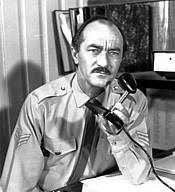 This is a dedication to an actor of outstanding qualities both as an artist and human. I became acquainted with Ben Gabriel whilst working at the Q Theatre in Penrith in the 1970's and early 80's. I was fortunate enough to work with Ben as an actor and director.

Ben was an Australian artist of the old school and his interest was in the work. Fame was not at all a reason to be an actor, as far as he was concerned. Consequently, his modesty has rendered him a little known member of the profession, as time has passed. Contextually, John Mellion, Bill Hunter, Ron Haddrick were fellow toilers and apparently golf buddies.

I would like, in my modest way, to mark his life and contribution to the Australian Industry, and to my life. Inestimable, both as a fellow artist and mentor by example.

Noel Hodda, spoke at the ceremony to commemorate Ben last week and I asked for a copy of his eulogy. It is unexpurgated and Noel's affection for Ben speaks to the qualities that Ben had and brought out in others.

I first met Ben when I was a kid growing up in Albury. He came to visit in our house regularly. Not physically, he came via the Pye black and white TV set in the corner of the lounge room. Sometimes he’d be a bit shaky or snowy and someone would have to climb on the roof and adjust the antenna so he could be seen more clearly but even then there was no mistaking him. Something about him in those shows from the past – Contrabandits, Homicide and the like – made me notice him and remember him so whenever I saw him again I knew I’d want to watch him. He was that kind of actor. Growing up I’d see him regularly on the TV and he never disappointed.

Years later, fresh out of drama school and completely wet behind the ears, I was cast in an ABC tele-movie (remember when they used to make them?) and on day one of rehearsal I walked in to find this man from my black and white past standing in front of me in full 3D – and colour – and he was going to be playing my father! I was gob-smacked and delighted at the same time. Di Drew, the director, started the rehearsal process off with a full-cast improvisation to test the group dynamics. Well, it was the Seventies. Despite having just come from three year’s of impro and such classes I was suddenly a kid again and a bit awe-struck and stood off to the side, unsure of what to do. Ben noticed this and with a gesture that was part actor to actor and part father to son – and all Ben – he drew me into the impro and thus into the company. Introducing me to the group as his son and introducing me to the world of acting as a colleague simultaneously. It was a small thing but it speaks volumes about the man.

In the interests of history and to remind us of the work of the man we are celebrating today, I have been asked to remind us all of some of the things Ben did over the years – things some of you would no doubt have been part of or at least seen. Ben was more than his work but his work told us a lot about him.

Ben’s work in the theatre is often summarised by the Q years, but there was more to it than that. Prior to the Q he was a member of the Young Elizabethan Players and over the years before and after the formation of the Q he worked at all the major theatre companies in Sydney and Melbourne as well as in Qld and WA.

He especially shone in a number of Australian plays over the years:
The Harp in the South – MTC; in Summer of the Seventeenth Doll, three times: in Melbourne in 1958-59, NT tour 1960, & the Q Theatre production; Wacka in The One Day of the Year for an Arts Council tour in 1961 and again in Tokyo in 1966;
Rusty Bugles at the Independent Theatre; The Shifting Heart, for The AET Trust;
A Hard God; Dad, of course, in On Our Selection, and, amongst others, productions of Reedy River; Travelling North; The Department; The Club; The Warhorse; Molly Dies; Fields of Heaven; What If You Died Tomorrow and No Sugar (which was invited to the Vancouver Expo in 1986).

Plays and characters from non-Australian writers were lifted by his presence as well, including:
Willy Loman in Death of A Salesman at The Old Tote in 1970; Julian in Tiny Alice, Old Tote; ‘Tis Pity She’s a Whore, Old Tote; Lear in Edward Bond’s magnificent Lear, Old Tote 1974; Nine productions of Shakespeare for Schools; Gloucester in King Lear, QTC and The Three Sisters and The Lower Depths for the STC. Memorable Q performances in overseas plays include Max in The Homecoming in 1980 and Dodge in Buried Child the following year.

Theatre was Ben’s first love but that didn’t mean he didn’t make his mark elsewhere. He was also part of the resurgence of Australian cinema, appearing in films like The Mango Tree; Fighting Back; Break of Day; Let the Balloon Go; I Can’t Get Started and Turning Point and in mini-series and tele-movies like The Dismissal and A Step In The Right Direction, where he played my father.

And then there is television.

Of course he was Jim Shurley in Contrabandits for ABC TV for which he received a Penguin Award for Best Supporting Actor. Also for ABC TV: Over There, Dynasty, and Delta. He played numerous characters in Homicide (at least 13 times over the course of the series), as well as Division 4 and Matlock Police; A Country Practice; Home and Away; All Saints; Fallen Angels; Sons and Daughters; Resistance; Prisoner; GP; Glenview High; M.P.S.I.B.; Case for the Defence; Shannon’s Mob; Cash and Company; The Last of the Australians; King’s Men; Rush; A Touch of Reverence; Chopper Squad; Boney; The Evil Touch; Ryan; Behind the Legend; My Name’s McGooley, What’s Yours?; Skippy; Consider Your Verdict; Riptide; Whiplash...

and others! No wonder he was always in our lounge room in Albury.

And I haven’t even got to radio...

Ben was an old school actor – there to serve the writer, the story and the director and by doing that, serving the audience. We need more Bens in our world.

You always did talk about an artists body of work KJ and Ben Gabriel is testament to the work.

He was a good actor.