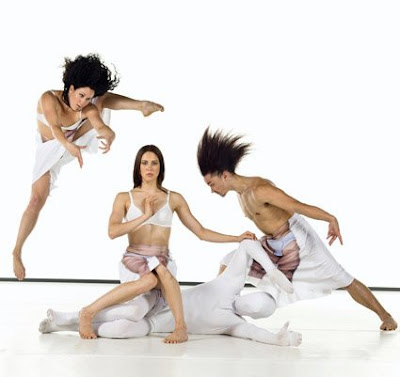 BE YOUR SELF from the Australian Dance Theatre (ADT, based in Adelaide), Conceived and Directed by Gary Stewart and Co-Choreographed by Mr Stewart and the ADT dancers, was presented at the Sydney Theatre for a very short showing of only 5 performances. The last time this company presented work in Sydney was 2007! Five years ago!! That, this is the most consistently exciting and innovative THEATRE company in Australia, creating original work (a kind of playwrighting), for, let's not just categorise them as JUST a dance company - a theatre company - and we have not seen them for FIVE years, is a gob-smacking, incredible, ridiculous fact.

Was there some issue with the Sydney Opera House management, that had brought them to Sydney in the prior years and then did not seek them out again in the recent past? Is there not a funding voice to support the national touring of this company? Is this Company more seen, appreciated, known outside Australia, than, in it? My friends, art lovers, casual "culture vultures", (and tax payers), who I tipped off about catching ADT in Sydney with BE YOUR SELF, are kind of puzzled, even incensed that the ADT has not been in Sydney recently or regularly. They were amazed, shocked, excited, paralyzed in response to this work - not all positive, mind you, but all violently engaged and ready to talk, chat and argue.

Sydney Theatre who presented this company last week, has invited the company back next year with another work, and all of you should find out when, and book it in, as a must. A must see. Whatever the piece. "G", I think - a response to the classic ballet GISELLE, I suspect it will blow you up with provocation, both, viscerally and intellectually, and with just straight out theatrical spectacle, as did BE YOUR SELF, for me. Thrill. BIRD BRAIN (2005) - a response to SWAN LAKE was all those things, in its time. "G" should be the same. When has the work from ADT, under Gary Stewart's aegis, not been that ?

Exciting that the Paris Opera Ballet will present the classic ballet GISELLE at the Capital Theatre late January/early February. As preparation for the ADT showing, nothing could be better. See the faithful source and then the contemporary reading. In 2010, as part of the Sydney Festival, we saw a fabulously contested reading of GISELLE by a visiting company Fabulous Beast. It will be a marvel to further compare and contrast. (It was what I was ruminating about, wishing for, in a reply I made to an anonymous reader in my lament over STRANGE INTERLUDE, and the pleasure of the ability to do that with other classic or contemporary works (e.g. HEDDA GABLER, THE SUMMER OF THE SEVENTEENTH DOLL* etc).

BE YOUR SELF was made for the Adelaide festival 2010 and toured around Europe. BE YOUR SELF has been co-produced by Grand Theatre de Luxembourg, La Rose des Vents - scene nationale Lille Metropole - Villeneuve d'Ascq, La Rive Gauche Saint-Etienne - du-Rouvray, CentroCultural Vila Flor Guimaraes, Theatre de la Ville Paris, and Arts SA's Major commission Fund. It was reworked for Sydney. Mr Stewart and his company, is in a constant evolution with his works. They never stay fixed. They are been constantly explored from season to season - an ideal way of creating ART from the craft choices of the earlier manifestations, in response to the present circumstances of the presentation : dancers (some of the dancers are new to the work), theatre space, and the beat of the drum of contemporary, science, art and politics. A living, breathing work.

BE YOUR SELF is a confluence of dance, spoken word, architectural design and video. On a white floor, with a raked platform, made up of a criss-cross pattern of elastic stretched patchwork, at the back of the stage - this platform can be slid forward and back, and used as a projection screen (Set Design: Diller, Scofidio + Renfro) - Mr Stewart looking at the 'self ', started with the body itself. An actor (Annabel Giles) recites a text book explanation of the neurobiological organisation of the body, in a myriad of fascinating and wondrous detail in scientific argot, as she walks across the back proscenium, whilst a dancer (Kimball Wong), centre stage, begins a series of static movements, that has him extending a leg high into the air, whilst miraculously balancing, seemingly without tremour, on the other, to an accomplished, startling sound design of the body noises, consequent to this action. Slushy, extortionate, wrackingly awful noise of sympathetic support elucidates the detailed technicalities of what our body, our visible self, does, to achieve our unconscious/conscious commands of movement (Sound Design: Brendan Woithe (colony nofi).


"The initial impetus for creating BE YOUR SELF was a result of a series of discussions between myself , the dancers and a Buddhist teacher Jampa Gendun on notions of self and 'I'".The work goes on to examine the psychological interactions within our self and, maybe, our other selves; and the changing selves of others. "BE YOUR SELF quickly splintered away from Cartesian mind/body dualism into a discourse on the gulf between the rationalism of the biological, scientific body and a body that is volatile and disordered and escapes finite scientific descriptors". – Gary Stewart

Whilst sounding dense in its extrapolated dramaturgical underpinnings, and I find it so, it is this, this very interesting background and research, that gives the dance work, an exceptional theatrical intelligence and rigour of clarity. The magnificent daring of the outrageously dangerous commitment of these dancers in their virtuosic physicalities, pushing the envelope of suspensions and manipulations in the air, in defiance of gravity, and the intimate trust of body with body by and with the dancers, has more than 'circus' resonances in the combined intelligence and artistic skills of all of the participants. The curiosity, and the serious, diverse enquiry of the company into being "one self", is palpable and powerful. We, the audience, are highly respected, and are invited to participate in the evolving investigation, discussion, of transporting ideas, made flesh, in front of our eyes. The very demand that we are asked to think as well as feel, while watching this work, is overwhelmingly moving. I was challenged and was captured with awe on many, many levels at once.

This dance work has many shifts and changes. It is never predictable. The final section where parts of the body of the dancers interact with extraordinary video projections (Video Designer: Brenton Kempster, ZuluMu Design + Post), is spellbinding, both, because of its conceptual precocity and the execution by the dancers. The lighting design by Damien Cooper throughout this work is simply effective and of the highest order. The integration of the text information, delivered at amazing speed and shot through with thought, not just paced verbal speed, by Ms Giles, is an example of how and when language becomes a useful adjunct to the communicative whole of a dance theatre work. (The incredible memorisation by Ms Giles of such 'dry' material should be acknowledged, as well - no easy feat. Maybe, as dexterous as some of the physical dance!) Similarly, the demonstration of the obvious partnership of the video artistry and the dancers in action, is an example, par excellence, of a successful creative and practical vision. The time discipline to achieve this level of quality must be formidable, indeed. The work is stamped with the persistent rigour of a persistent visionary : Gary Stewart. And, his technical and production team, doubtless toiling, in there, beside him.

BE YOUR SELF has been in the evolving repertoire of the Australian Dance Theatre since 2010. Time is the tyrant of all art endeavours. And, as in the recent showings for Performance Space at Carriageworks of Yumi Umiumare's EnTrance and Victoria Hunt's COPPER PROMISES it is the extensive time commitment to those works that may have given them the considerable ability to communicate and affect with such lucid and moving power. Time to mature.

Keep an eye out for the ADT return next year. Or take yourself down to Adelaide or somewhere Overseas - check their web site for their performance details. You will not be disappointed.
Posted by Editor at 5:28 PM

Kevin, You have reflected what was a very powerful, mature and thought provoking piece of theatre and dance. It was exceptional work of the highest order and should have been seen by many, many more people in Sydney. So I hope that Sydney comes out for this unique company in 2013 - the are a revelation.