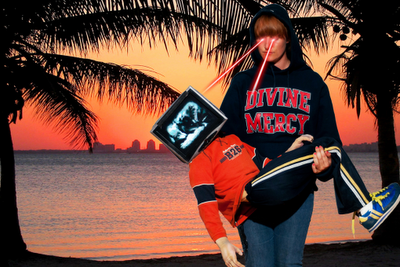 As part of the Dimension Crossing season from Performance Space at Carriageworks, COMPUTER BOY was shown briefly, in late May. The other works in this season were the highly accomplished ENTRANCE and COPPER PROMISES. COMPUTER BOY devised and presented by Martyn Coutts, Sam Routledge and Willow S. Weiland seems, in comparison, a work still, tentatively, in progress.

A puppet boy, (life size and connected to a 'hooded' puppeteer) street dressed, his own hoodie and all, has a computer screen where the rest of us have a face. Humanity diminished. An illness, a transmuting 'disease' contracted to produce horrible metamorphosing has occurred? Perhaps. COMPUTER BOY is dealing with the possible consequences of how the younger generation may be affected by a world where the ability to be immersed in a virtual world of electronic media abounds; where the game playing in 'tools', such as World of Warcraft (WOW) - a "massively multi-player online role-playing game" - that has held people in hermetic thrall (10.2 million subscribers in December, 2011), begs the question: is the possibility of playing these game types creating an inherently addictive "illness" of hugely negative impacts? COMPUTER BOY is disturbing and the answer, if this story is possible/typical, is YES.

Using contemporary performance (text, Willow S. Wieland) puppetry, machinima animation (Sam Routledge), video (Martyn Coutts) and an original score made with video game consoles by renowned electronic composer (DJ TRIP), we are engaged in a story of melancholy tragedy. The work crosses between a real and virtual world and is affecting, especially because of the 'life' of the puppet in action. The interaction between the other elements of the show disciplines, "the fusion of the other art forms"  is poetically juxtaposed. As in the production of AFRICA from the company, My Darling Patricia last year, and even more mightily, from the production of WARHORSE, the magic of the puppetry reveals itself as a seductive one. Sam Routledge, one of the creators of AFRICA, brings to COMPUTER BOY a similar level of artistic integrity into the investigation of this issue amongst children in our world, that has elements of profundity and complex emotion.

The time development of  COMPUTER BOY is not as extensive as the previous two projects presented in Performance Space's DIMENSION CROSSING season, and it shows. One hopes for a continuing evolution and for the work to be presented again.
Posted by Editor at 11:57 AM