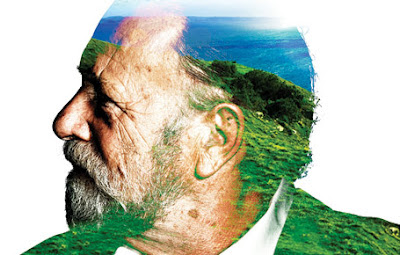 UNDER MILK WOOD by Dylan Thomas is A Play For Voices, commissioned by the British Broadcasting Corporation (B.B.C.), broadcast in 1954 and staged at the Edinburgh Festival in 1956 (later, that year at the New (now Albery) Theatre, London). A film was made in 1971 starring Richard Burton and Peter O'Toole - Screenplay by Andrew Sinclair. Dylan Thomas had died in 1953 aged 39.

When I was studying at NIDA, whilst, with my class, performing the whole of Henrik Ibsen's long poem PEER GYNT (five and a half hours of it!), Alex Hay, our acting teacher and director, thought we could also present UNDER MILK WOOD as an adjunct, to give the company more to do (our training was joyfully intense! We learnt by doing - different today, I know). We presented it on the same set - a raked green platform with a cyclorama. This was my first meeting with this work. Last year, while preparing a production of Lachlan Philpott's play COLDER, I played for the actors the Richard Burton led cast of UNDER MILK WOOD to give them a sense of the quality of writing and the vocal demands that Mr Philpott was asking of his actors to deliver his work (true of SILENT DISCO as well, I reckon. Mr Philpott, playwright and prose-poet, par excellence). We also heard some excerpts from a recording with Dylan Thomas, himself, reading the First Voice. I have a long memory of this work and was happy to re-acquaint and to see it again.

To SEE it again. The work, a play with voices, meant for radio, asks the audience to see with their ears. Only a company with voices, and a love of words, and a delight in the manner in which those words are combined to make a communicable language, should be involved. Mostly, the MILK WOOD, Sydney Theatre company, has those gifts. This company chose to work in an "educated" Australian English sound and it works well. Daniel Jones in his first preface to the published text for EVERYMAN'S LIBRARY in 1954 says, "it must be made clear that the language used is Anglo-Welsh" and that Dylan Thomas, himself, spoke no Welsh at all. Sian Phillips, a Welshwoman, and actor, in another context, spoke of the musical range of the Welsh as naturally crossing some 15 notes and that English in comparison, has less, and I would suggest the natural Australian sound may be even less again. However, this company, working with the Voice Director, Charmian Gradwell (and presumably Alan John (the musical director), arriving with gifted vocal modes, produce a rich tonal range that allows their imagination to express richly the images of the language, for us, then, to have a rewarding time in the theatre.

Jack Thompson, The First Voice, carrying the text, which he sometimes literally reads, and, at others simply holds and recites from memory, (Mr Thompson, an illustrious film actor, gives us courageously, his first performance on stage, for 40 years - yikes!) comes out of the dark of the black hole of a black curtained surround and conjures with a mellifluous sound: "To begin at the beginning....." He catches us in his obvious affection for the poem and the lived-in resonances of his voice, and I sat forward and saw with my ears as I listened to his personal music and imagery connect to those words, to make them ours. Magically the rest of the company shimmer out of the dark, (lighting by Damien Cooper) and the short day's journey into night, in this larger -than-life word painting of a small mythical Welsh fishing town, Llareggub, takes flight.

Sandy Gore as Second Voice (and other responsibilities), captures magnificently the tenor of the needs to make this work glow - imaginative intelligence, word and music sensitivity and a voice that can play glorious range for affect. Paula Arundell, created for me the memory of the night, in her creation of Polly Garter and her sung lament over the love of her life "…little Willy Wee who drowned and died … who is dead, dead, dead…". The silence that follows Polly's final line is fathomless with a kind of profundity that only contemplation of the unknown, the undiscovered country of our end, and the regrets surrounding it, can bring.

Discovering the romance of the soul of Bruce Spence as Captain Cat makes one long to see him more challenged on our stages, more often, whilst, the re-discovered acting wealth of the soul of Drew Forsythe, in all of his tasks, but impressively, especially vividly as Rev. Eli Jenkins, reminds us, who have been around long enough, that before Mr Forsythe found the "clown" of his persona, that has dominated his acting opportunities, castings, over history, there was an actor of impressive range possibilities. The truthful gravitas, the pained sincerity of a mediocre but 'worthy' man, without a hint of larrikin Australian irony, that Mr Forsythe gives us, with such affectionate insight, gives one pause, as to how well we have used the talents of some of our artists/actors (now what could they have done with Pinter's NO MAN'S LAND, for Sydney Theatre Company last year?). Both are wonderful, wondrous, under the spell of Mr Thomas' verbal weavings.

Kip Williams, who has taken the reins of this production from the announced director, Andrew Upton, makes a fairly impressive debut on the main stage. His rapport with his actors seems free and trusted. His approach to the text seems lucid and detailed. The appearance of the company out of the dark is an early coup de theatre of an expressive and non-distracting type. Similarly, the reveal to a landscape of the sea harbour (set Design, Robert Cousins) - it captures one's breath. However, it stays too long and ultimately provides distraction from the language imagery of the poem. The fussy, opening rope-trick with Captain Cat's chair, like the final cluttering of the visuals, on the stage, with vased single flowers in a multitude of bottles, suggests an uncertainty in the trust of the poetry of Mr Thomas' imagery to keep his story and us engaged with it. Or, is it another indulgent post dramatic gesture, much like much of the visuals in Mr Williams'  recent production of I HAVE HAD ENOUGH for the Sydney Chamber Opera company, last year? The black box set with the gloss floor reflecting the glowing lighting imagery arranged by Damien Cooper seemed to be just right. I believe, it, the bare stage, set out to help us to 'see' not verisimilitude but reality. It should have been better trusted to sustain us, with the actor's voices, through the night. The costuming by Alice Babidge and David Fleischer cover character and actor worlds, subtly, period and contemporary - drawing no attention to their artistry. The musical arrangements and support by Alan Johns, who also works as an actor, delightfully well, is an interesting contemporary emotional support, and, of note.

On opening night the production tempo became ponderous and lost forward momentum towards the latter section - whether this was because of the visual images over burdening the aural offers of Dylan Thomas is something that I debated. Were we made unnecessarily tired with so many offers going on?  We were being spoon fed the play, it was being presented instead of pursued. We had nothing to invent, imagine, it was shown to us. It, ultimately, becomes boring to just look, we want to 'read' and 'chase' the play from the edited clues of the director and actors. To be fellow imagineers not just admirers. It was enough to see with our ears. The visual details did not seem to help us to hear more clearly with the eyes. Rather, to the contrary, they became obstacles to concentration and clarity. After the simple beauty of the actor, glowing in the lighting, on an empty stage at the start, we were book-ended, finally,with a visual mess of unbeauty and obfuscation. There is a principle that the ear does not hear if the eye is not completely satisfied.

Like OUR TOWN by Thornton Wilder, recently presented by the Sydney Theatre Company, UNDER MILK WOOD "…is a little play with all the big subjects in it,  and a big play with all the little things of life lovingly impressed in it". Historically, Dylan Thomas was continually re-writing the play, for him, it was incomplete, and he died before he was pleased.  In this production there is, luckily, a sense that it is complete. It is a notation from a big heart.

P.S.: There is an essay by William Christie in the program: FULL AS A LOVEBIRD'S EGG discussing Women, Sexuality, and Relationships in Under Milk Wood. It is very interesting to discover that Mr Christie has written UNDER MULGA WOOD - An Imitation (2003). An imitation of UNDER MILK WOOD set in an outback Australian town for Australian voices. Instead of ''To begin at the beginning: It is a spring night in the small town, starless and black ...", we have, "Let's start from scratch. It's  a dead still, dry season on a never-never night in the small town of Goadabuggerai…" There is a Radio National recording (2005) with, amongst others: John Sumner, Elaine Hudson, Susan Prior, Bill Conn Fiona Press. I, have heard, as well, a recording with Neil Fitzpatrick and Maggie Blinco leading the way. Now that we have been given the original will we hear/see the Australian text - would be interesting fun, don't you think?
Posted by Editor at 10:57 PM