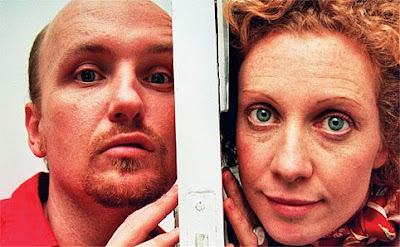 Matt and Bec, and their friends at work: Belle and Basille, belong to that crowd who have made it and seek the next thing because "they deserve it, darling!": a big teak (endangered forest or not!) back deck, a humongous barbecue, a big real-estate deal, an interior job of a 'glorious' kind, etc, etc. They have that unspeakable itch for more, and in these present economic mores overreach themselves with blazing consequences. The GFC and the credit card crunch push this couple to crisis!

THE UNSPEAKABLE ITCH is the third musical comedy delivery by Kate Smith and Drew Fairley, the previous being: BANGERS AND MASH and THE NO CHANCE IN HELL HOTEL. It is they say, the culmination of nine years of an intimate theatrical relationship - a "kooky theatrical marriage" and they assure us that they have been "…lucky-theatrically.  (but) Don't get us wrong - there have been stinkers." And, although, THE UNSPEAKABLE ITCH is not a stinker it is a very thin piece of work. Fans and "theatrical family friends" will probably enjoy it best. If these characters, Matt and Bec, are new to you, as they were too me, you might not buy into the night with quite so much interest.

The light comedy sketch work is full of gentle laughs and "shameless one liners". The songs, music and lyrics by Phil Scott, arranged on the pre-recorded music tracks by Andrew Worboys are gently warming and easy listening. All the artistic input practical and simple, if not totally glamorous. The video content (Ross Graham), mostly used to cover costume change, not always a seamless segue that adds much to the progress of the show.

Kate Smith, on the night I saw the show, was pumping away with all the energy of a completely comfortable and primed artist in this material. Mr Fairley, not always 'ready' and slightly fluffy with some of his 'sound jokes" in the first half, warmed up for the second half, where he sang with some good commitment .

This little show feels like one of those shows that one can catch in the side lounge at a big club - benign and casually amusing. Clearly, the artists have a loyal audience for these creations, but this production maybe just a little light to attract a new and building crowd.
Posted by Editor at 2:01 PM