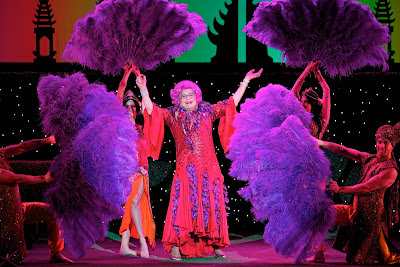 I came to Barry Humphries' work very late (I don't mean to this actual performance late, from experience of other shows, I would never dare). EAT PRAY LAUGH! is the fourth or fifth show I have attended. I am a fan. My first time, I remember, was at the State Theatre. I went under forced curiosity. I sat down in that sumptuous theatre a little apprehensive and nervous (believe it or not) and subsequently, laughed so hard and so consistently that I ended up giving myself a migraine - I am not, thankfully, susceptible to migraine, usually - I just had had too much of a good thing and my body overloaded in , I suppose, compensation. Maybe my water shed of laughter tears had caused dehydration? No gain without pain, my Catholic schooling had taught me.

Dame Edna had always looked too much like various relatives and friends of my extended family, and I was stupid and kind of thick - or just afraid of being found out - and feared that the material of Dame Edna was cruel: too near the bone of my surroundings, to be funny. On the above night, I must have been, at last, mature enough to GET it. But, even more, I also understood, that not only was Barry Humphries a great comic, he was an accurate and judicious observer of the world around us, and he had a basic love, if not wholly optimistic faith in the human species, and loved, deep down, us, and all that he created, for us. But, best of all my discoveries, was, was Mr Humphries was also a great actor. Now, as then, this actor has created in the formula of EAT PRAY LAUGH!, four characters for our entertainment and edification. They were miraculously, pulsingly alive and I loved them, all. The spectacle of his characters can be terrifying, can be pitiful, but they are always funny.

With EAT PRAY LAUGH! (I keep writing EAT PRAY LOVE ! instead of EAT PRAY LAUGH! - Love for Laugh, tells me something, I reckon), we saw Sir Les Patterson, a politician, cultural ambassador in retirement looking for a role as a celebrity chef on television. COOKING WITH SIR LES. Now, nearly as physically gross as some of the master chefs that appear on our televisions, weekly, if looks are a major criteria, Sir Les could have a job. Channel 7 is getting desperate. I didn't voice that, I didn't! Next, a new person, his brother, Gerard Patterson, a 'touching' member of the clergy (Cardinal Pell knew of him, it seemed). Lastly, a delicate 'ghost', Sandy Stone, full of poignant reminiscences of his, once, local habitat. All in the first half, all costumed, bewigged and 'owned' with the brilliant consummate art of a great actor/artist. Changes, cosmetically happening, dazzlingly quickly, it seemed, in front of our eyes, but , even more startlingly with an innate kind of plasticity that seemed to emanate from deep inside Mr Humphries, so that each of each creations were, also, whole inner transformations. Existences rather than characterisations. Persons created from the inside, to the outer cosmetic and costumed enamelled recognisable characteristics of an objective design.

I was reminded of reading Simon Callow talking of one of my favourite actors, Alec Guinness (both Guinness and Humphries, coincidentally, having played famous versions of Dickens' Fagin, one for the David Lean film, OLIVER TWIST, the other, for the West End, Lionel Bart musical, OLIVER!) : "The measured gravity, the detachment, the faint air of whimsicality ... " produced an impression of each of his creations that were '".. curiously compelling. Guinness seemed to change alchemically, his metal altered in the crucible of his imagination..." [1]. (Check out KIND HEARTS AND CORONETS -1949).  So too, of Mr Humphries, I believe.

I quote Mr Guinness, in my regard for Mr Humphries' work, "An actor needs a slightly mystical approach to the stage, you can't force yourself on the character" [1]. Barry Humphries, even in the vaudeville tradition of his practice has that air of mysticism. It certainly permeates his greatest personation, Dame Edna. Mr Humphries appears possessed by this woman, and is being manipulated by an inner force, and, so when in Edna's presence, this power and mysticism impresses us with a kind of cultural recognition of our Australian ancestry - Edna Everage is a legacy of our genetic inclinations, and one of every Australian family.

What, with the International success of Edna, she  maybe even more iconic than just in our local parish. Parochial icon she is not, eh? She is indeed an International Superstar - affectionately recognized and embraced all over the English speaking world.

EAT PRAY LAUGH! directed by Simon Phillips and designed by Brian Thomson, firstly a green grassed Aussie backyard with bar-b-cue and shed, and then green hedged garden of a suspicious looking ashram, is a very smooth and upmarket looking showcase for the hilarious gifts of Mr Humphries. Surrounded by a team of deliberate 'cheesy' dancers with 'cheesy' choreography and truly woeful musical numbers (not too many - Z- grade Club material) we are regaled into continuous laughter for almost three hours. The sometimes audacious, cutting edge of the material (held breaths with some of Gerrard's double edged conversation) is counterbalanced with the familiar torments of a vaudeville stand-up comedy act, that Edna and troupe have given us before - intense, but funny audience interaction et al. The structure of this show and the material is mostly old stuff from past incarnations, but there is enough new text and jokes to keep one from being too agitated, besides, those 'oldies' are clearly, still, 'goodies', for we were entirely immersed. Both, those that were new to the Edna experience and those adoringly familiar with her and her mates and her style. The gladioli made a lovely (sigh) appearance.

Mr Humphries in his "Welcome Possums" note in the program tells us that despite the rumours, a wise story of the bad reputation that RETIREMENT has for him, concerning a Mr Ted Whittle, has given him reason "to therefore promise (us) that (he) will not permanently vanish from (our) midst but for the time being at least, (he) will be nurturing and expanding (his) other not inconsiderable talents." On stage as himself in the curtain call, which was tremendous from near 2, 000 patrons in the theatre, Mr Humphries intimated, he will be back, just at a more convenient scale next time. Let us hope, that like Dame Nellie Melba and, some think, Johnny Farnham, he continues to farewell us. He is a tonic for life that should always be expectedly available.

Otherwise, Bob Downe, sharpen up the material - you may be it, next.

Yes - a unique performer, a deliriously joyful evening in the theatre - and let's just hope that stacks of Australian parents find the money to take their kiddies to the final flowering of the one and only Gladdiator of our stage: an actor so in tune with his characters that he can take us down the most remote tracks of their minds- and almost always to places where we would beg to be allowed to stay for one more hour...or two or three... with interval, and another few minutes so we could applaud. His wit strikes sparks from current hot topics and revives memories(as you say Kevin)of the Australia in which we grew up - its buildings, its heroes,its forgotten preoccupations. Will there ever be another such chronicler of the past? Someone in whom his own past is so alive and so brilliantly recreated for us (cf Sandy) that we are held spellbound-or enthralled at the echoes of our own forgotten experience. And let's not forget the daring - the invitation that is issued , night after night, to members of the audience to tell us about themselves and help to put on the show.Sure,Barry's had years to perfect his control, but that guinea pig in the second row, who winds up on stage in a fancy costume,sometimes does rise to the occasion and try to go a witty round with the Dame. But would Edna ever be lost for words? Her creator knows that she must always come out on top, and the thrilling, delightful thing is to see Edna regain the upper hand. She simply has to; that's her nature, and Barry's gift to us is that it happens with such apparent outrageous ease.
On top of all that -and oh, there is so much more one could , and one OUGHT to say - for now just a word about Barry's technical skill. For it isn't often remarked upon.What a marvel it is, that he can come out riotous and roaring as Sir Les, then scale it down to the otherworldly musings of the creaky Sandy,giving us a sweet,wistful song as he remembers the child he and his Beryl lost so long ago,and then return to dazzle us all with the triumphant exclamations and calculated whispers of La dame aux Gladelias.
Special beyond words!