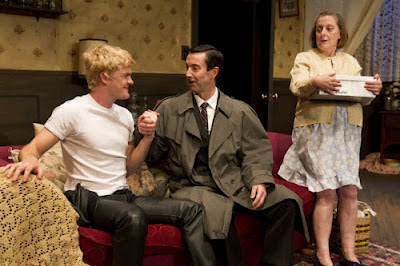 ENTERTAINING MR SLOANE (1964), LOOT (1965) and WHAT THE BUTLER SAW (1967) are the three major plays of Joe Orton. All, now classics, timeless in their observations. The form of Mr Orton's inventions became progressively more and more sophisticated until finally in WHAT THE BUTLER SAW, we have a masterpiece of wit, at a Restoration play level of complication and satire, and a combined dangerous physical farce of the top notch vaudeville stage exemplars. Both ingredients insisting on actors of amazing skills to pull it off. Most companies are up against it - the skills really need to be Olympian.

ENTERTAINING MR SLOANE is the most naturalistic of the works and it winds itself into a world of hysteria gradually and carefully. We begin in an ordinary room with Kath (Alice Livingstone) showing a prospective boarder, Sloane (Brynn Loosemore) the advantages of her house as a place to rent and live. Just who needs Sloane to live here, whether it be Sloane himself or Kath, quickly becomes shockingly evident. Later, Eddie (Pete Nettell) and Kemp (Frank McNamara), the two men of the household, take an active interest of Sloane's suitability, as well. The play begins in a world we know, on Earth, but slyly escalates into the outer regions of Venus and Mars, lubricated by comic farce, where sex and violence, quickly become acceptable modes of 'commerce', even to the limits of sexual perversions and murder, to accommodate the needs of the human animals of the play. Orton understands, according to John Lahr in his Introduction to the Eyre Methuen publication of the play script (1973), how much the sensibility of his characters have been molded by the sixties society. "He was the first playwright to dramatize the psychopathic style of the 60's - that restless, ruthless, single minded pursuit of satisfaction - transformed by drugs and rock music into myth."

NAUSEATED
As a playgoer of forty years may I
sincerely agree with Peter Pinnell in his
condemnation of ENTERTAINING MR SLOANE.
I myself was nauseated by this
endless parade of mental and physical
perversion. And to be told that such a
disgusting piece of filth now passes for
humour.
Today's young playwrights take it
upon themselves to flaunt their contempt
for ordinary decent people. I hope that the ordinary decent people will shortly strike
BACK !
Yours sincerely,
Edna Welthorpe (Mrs.)


This 'Edna' was actually Joe Orton himself, fanning the scandal of his first produced show. SLOANE is no longer a shock, but, it still carries a considerable whack and is more than just comic. It is still provoking and surprising in its unconventional ease with sex and violence as reasonable solutions to obstacles to the character's needs, even in today's world.

"All his plays deal with violent death or the threat of it; and Orton, as the major stage satirist of the 60's, knew about killing with laughter.". To be destructive, he wrote in his novel HEAD TO TOE, “Words must be irrefutable ... Print was less effective than the spoken word because the blast was greater; eyes could ignore, slide past, dangerous verbs or nouns. But if you lock the enemy into a room somewhere and fire the sentence at them you could get a sort of seismic disturbance". So, Orton, a failed actor, turned to writing for the theatre, a room where the audience could be, was, locked in, and hoped his words would cause laughter that would 'kill' the hypocrisy about him. They did. They still do.

The New Theatre production directed by Rosane McNamara is pleasantly competent, but not much more, for the word usage is, mostly, in blurings of brush strokes of detail, instead of the pointillist dab of connected words, for affect, to create an impression, where the word by word clarity of information should be built to intricate explosions of jokes that compound to collected explosions of outrage and laughter. The Sydney Morning Herald critic Jason Blake, wrote of the potential of this production and had hoped that as it settled in it would find more of the darkness of the comedy. Seeing it in the last week of the run, the production though nicely staged and drilled, lacked from the warring siblings, Kath and Eddie, the technical detail and pointed use of the language to reveal the full comic possibility of the text. Instead we get generalised effects and lose the verbal witticisms in the appropriate but jumbled speed. A laugh at the end of a long speech instead of the potential of, sometimes, a laugh a line. The thinking, in-the-moment, from Ms Livingstone and Mr Nettell is not sharp enough and their technical use of the vocal instrument's range is shallow, and fails to help draw and keep the audience attentive to the dexterity of Mr Orton's muscular wit and satiric wordsmithing.

Mr McNamara with his slightly studied care in searching for the right word as Kemp, succeeds to build a rapport with Mr Loosemore's Sloane in the Ortonesque twists and turns of their scenes, that, together, have more appearance of controlled tempo, for the jokes to be pointed, landed and absorbed by the audience. Indeed, Mr Loosemore as the object of sexual tension in the play gives an understated and sophisticated attitude of accommodation to Sloane to all the furore about him, benignly open to the requests of his hosts, and the sudden shifts to violence are as astonishingly strange to us as Mr Hyde's were in Robert Louis Stevenson's good Dr Jekyll. Mr Loosemore's Sloane remains oddly attractive in all the bickerings of the others, and murder accusations are the last thing we would want to aim at him. This Sloane has entertained us into a place of moral creep. We, too, are seduced.

The realistic set by Marissa Dale-Johnson has the right weight of period suburban grunge - all lovingly, heavily used and worn. The costumes, as well, were simply realistic and added delightfully to the feel of the world of the play: the see-through nightie of Kath particularly sensational in every kind of way for the comedy and its sexual titivation - thrilling! Thank you, Mr Lighting, Christopher Page. Mr Sloane's leather chauffeur gear, not quite right, but sexy, still, in its incompetent naivety.

This production though lacking the razor sharpness of thought and vocal edge that Orton demands, had more of the play right, than not. A, relatively, good time was had by all on the night I went. It certainly was more satisfying than the STC production of LOOT last year.
Posted by Editor at 10:08 AM