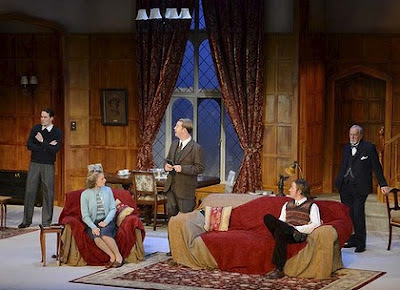 The publicity for the production of Agatha Christie's THE MOUSETRAP has centred around the 60th Anniversay of this play's production. It has been running in London non-stop for precisely that length of time. It was felt this was a way to celebrate it. Given the penchant audiences have for the television productions of Ms Christie's work - both, Miss Marple and Hercule Poirot; and the unbelievable success of a soppy, soft series such as MIDSOMER MURDERS, this seems like an astute move by the producers.

I had to walk to the box office twice before I could get a single ticket. The night I went it was sold out. I have never seen an audience in the Sydney Theatre so happy in the interval and so engaged as they were exiting. Discussions about such and such a character. "Did you guess it?", "I thought it was him", "She was so convincing", "Wasn't that terrific?" erupting on the footpath afterwards, as I fought my way to the stairs to my bus stop , through the milling crowd. Usually, everyone has bolted out the door for home - if not before the end, straight after. Bothered and bewildered. Staff have told me that they have never seen such contented audiences in the foyer of the Sydney Theatre in the interval. Even better, they have had no complaints from a single customer. Bliss and happiness all round. Producer, theatre staff and audience. Something is right with this, indeed. N.B. That this production is not miked and even in the Circle where I was, I heard every word. A completely boxed set must help the usually notorious acoustics of this theatre a lot.

For those who go to the theatre regularly, THE MOUSETRAP is a very conventional work. The play has a beginning, middle and an end that all of us can read and understand. It has characters that the audience can recognise and identify with - for or against. There is mystery, intrigue and suspense, and comedy as well, enough to keep everyone contented and occupied. For some around me, enthralled. This is the play as writ without a director's hand at all taking a point of view - thank God it isn't at Belvoir. How will a fellow artist to Ms Christie, Noel Coward, survive down there with PRIVATE LIVES. It is not Mr Stone at the helm, is it?

"The house looks not so much a period piece but a house which has been lived in by generations of the same family with dwindling resources. There are tall windows up C.; a big arched entrance up R leading to the entrance hall ..."

And this is what we see when we enter the theatre. Set Design, Linda Bewick (no curtain, I was disappointed - nothing like the swish of the rising curtain to boost one's excitement). A meticulously large, tall and warm wooden panelled set and 'fat' furnishings with lots of coverings in a warm amber glow (Lighting Design, Matt Cox). The lights fade to black and we hear music of "Three Blind Mice" following a whistle and screamed voices fading to a silence (Sound Design, David Tonion). The lights rise and there is a a radio broadcasting news of a London Murder and then Mollie Ralston (Christy Sullivan) enters. Over the next twenty minutes or so we are introduced to each of the characters who are arriving at the house and to be marooned here by a snow blizzard as a murderer hovers to enact revenge. Who Dunit? After two hours or so, we know. And we enter a covenant not to tell anyone, as tradition demands.

What is splendid with this production is that it is played dead straight - no spoofing at all. It is this conviction of reality that prises us into the conventions of the work and its time - it does work - splendidly. This should not come as a surprise. Ms Christie is an expert at her craft. The production and the acting is good. More detailed direction (Gary Young) could still sharpen it even further. It is nicely paced but not subtly nuanced. Ms Christie can plot her plays with a brilliant ease, she can pencil line a character type accurately but her dialogue is simply direct and deliberately constructed to develop suspicion and tension and not much else. Get the character costume and make up choices down for easy cluing and then go! (Costume and Hair, Suzy Strout).The actors, then, need to accurately and technically deliver the information in the line and deny the temptation to play histrionics. It has to be deliberately placed and paced. There can be a tendency from some, at some times, to glide too effortlessly through the dialogue without technical thought. It needs real care and concentration. It is a tricky balance. Recently, I saw a lovingly directed production of ROOKERY NOOK (1926), a Ben Travers farce, by Rodney Fisher with students that had the line by line nuance beautifully. It adds an exquisite element of class, period and truth and an invitation to ease, for the audience to believe, to follow. The sounds of the words have information and period atmosphere.Both have to be captured for an excellent time in the theatre.

I thought Robert Alexander, genuinely wicked, pointed finger and all, in his creation of Mr Paravicini; Linda Cropper, irritatingly deserving as Mrs Boyle. Terrific work from Gus Murray, Nicholas Hope, and Travis Cotton (a little over the top!?). Ms Sullivan, as Mollie, was too shrill and sat too much at the same level for my complete belief and comfort, and oddly, Justin Smith as Detective-Sergeant Trotter, while more than competent, was not as suave or confident as usual. Still always a pleasure to watch him at work.

All in all, then, a good night out. For most, a great night. I knew it would be, when the audience, some five minutes in, chuckled to themselves as the radio described a suspect of the London murder at the same time as a character was tidying up the room and picked up from the back of the couch "... a dark overcoat, light scarf, and a soft grey hat." They had a suspect ripe in front of their eyes.

The Empire Strikes Back!

This is an all Australian cast. It wouldn't have happened way back then. Even more amazing no "soapie star" needed to attract the bums to the seats.  Please, STC take note. Just the reputation of the Play and the Author. Belvoir has been gambling on that for the last few years. Pity, what Belvoir have done to the plays and the authors, some would say. Ask Mr Albee. If you dare. Ask Mr Shakespeare, Gorky, Chekhov, O'Neill, Beckett if you can.
Posted by Editor at 9:54 PM

Very nice and balanced review. You really manged to sum up my own experience of watching this play at the Sydney Theatre a couple of weeks ago. I loved the buzz of the audience at the interval and the constant guffaws throughout.

Re: "Travis Cotton (a little over the top!?)." not for my taste he wasn't, I loved his performance.