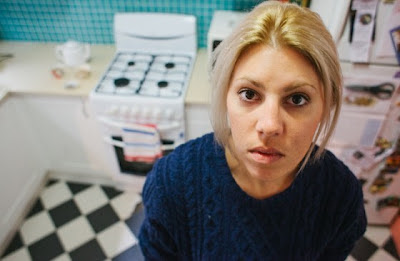 SHALLOW SLUMBER is a small two-hander by Irish playwright (lives in London), Chris Lee. It concerns the relationship between a Social Worker, Moira (Rebecca Johnston) and a mother, Dawn (Catherine Terracini). Mr Lee, himself a social worker, has written over 30 plays and sees theatre as a source for social change.

SHALLOW SLUMBER was written in response to a case of a child death and the subsequent press reaction to the role of the social worker. Mr Lee set out to present a situation that could demonstrate the human complexities surrounding the social worker and their interactions with their "clients" and how easy it is for human frailties, on both sides, to rise to the surface, and obfuscate the problems and their possible solutions. It was a gesture to de-demonise the social worker and help to understand the mother in this kind of situation. The play may feel overtly socially conscious. On being both Playwright and Social Worker, Mr Lee says, "At worst this can lead me to view the world through catastrophe-tinted spectacles. At best, it provides the privilege of insight into lives, just hanging on in the desperate spaces…" of the world.

This production by Director Peter Mountford, is modest in its resources (Design, Anya Tamsin) and achieves a performance, over nearly 90 minutes, that demands of the audience, an empathetic concentration. The play is told in Three Acts in reverse order of time. The first as Dawn is released from prison. The second around a visit in prison by Moira to Dawn. The third and last, on the night of a terrible discovery. Some of the text has been edited and there is, what feels to be an imposition of a choreographic element of 'dramatic dance' throughout the performance, that in combination does not seem to enhance the revelations of the writer but rather distract and puzzle us.

The play takes hold, despite the physical theatre-interludes, in the dramatic textual embodiment by these two actors. Ms Terracini is solid and grounded in the gripping revelations of a woman suffering through a life of unfair obstacles and is matched against the awkward, slightly bewildered, inexperienced, social worker created by Ms. Johnston. Each of the scenes begin slowly and gather speed and tension.

This production of the play was not difficult to watch, but, other than it has two good roles for two women to create, the reason for the play been done did not find its justification. Neither the position of the social worker or the case history of the mother is really elucidated clearly in this production - whether that is because of the play editing or the added dance elements, I am not sure. In London where it was presented at the Soho Theatre in January it was sold as a play 'for social workers everywhere and anyone with a heart." See what you think.

P.S. SHALLOW SLUMBER has no information about the creator of this work, Chris Lee, in the program. Without him no one involved would be doing anything. The writer wrote and his word was made flesh, for goodness sake. For ethical reasons, if no other, give the writer his/her due!! Similarly, THE HIGHWAY CROSSING did not have any bio-graphical information about Jaan Tatte, the Estonian writer.

What is this? The writer does not exist or something? Is it a sign of the attitude of our creative artists that the writer is the least important contributor to a production? Simply a resource to be exploited? I just don't get it. I would have thought that the writer was the instigator of everyone else's input to what happens on the stage, and therefore the most indispensable. The most important figure to record a history about?

Boy, does it make me sad.