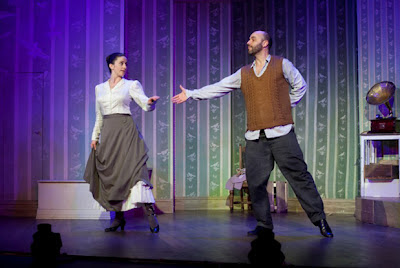 A Critical Stages and The Follies Production of SYNCOPATION by Allan Knee at The Concourse Theatre, Chatswood.

SYNCOPATION by Allan Knee, an American text, opened on Tuesday night at the new Concourse Theatre in Chatswood (great space). It was this production's 41st venue on a long and extensive tour over the last five months. It moves on to Illawarra Performing Arts Centre, Wollongong, next week and finishes (I think) out at the Riverside Theatre complex at Parramatta the week after. I reckon it is worth making an effort to see.

SYNCOPATION is a two-hander, two act play. It is set in New York in 1912. Henry Ribolow (Justin Stewart Cotta), a 38 year old Jewish meat packer places an advertisement in the paper for a dance partner. Many times over many months. He has little success in attracting a reply. Then, one evening, Anna Bianchi (Emma Palmer), a young Catholic seamstress, turns up at his studio/apartment, at the top of a walk-up residential building. Anna doesn't know why she has replied, does not know why she is there, she has never danced before, just an urge, but, it is, in this play, the first of many steps that she takes in breaking the rules, an ordinary iconoclast, in her restricted world. These two odd-coupled people begin a journey of personal growth as they investigate the possibility of being dancing partners, envisioning, gradually, the dream of being some kind of ballroom dancing stars. Oddly, at the bottom of the mirrored wall - the magic fourth wall of the theatre, the actors engage us face on with this theatrical convention, directly communicating with us, totally disarmingly - there is an autograph of two dancers: Irene and Vernon Castle - two, to-be-famous dancers of the period. More than that happens,in the play, of course, and the personal journey of Henry and Anna becomes, ultimately, as important as the 'professional' dance one.

It is, but the shtick is cunningly, gently, entwined in a political background of social upheaval and change, encouraged by the technological developments, swiftly revealing themselves at the beginning of the Twentieth Century, in this 'melting pot city', with its Statue of Liberty dominating part of the skyline, in this land of the free. All is potential, and all is possible.

The world  is 'exploding' outside this dance studio. Mr Cotta and Ms Palmer bring all that world imaginatively into the dance space of the actual play. We see the outside worlds peopled vividly through the magic of the actors' talents. The dance practice becomes a means to illustrate and identify as metaphor, the bigger picture of the frantic and optimistic surge of the new century, struggling against old traditions and prejudices. E.L. Doctorow's RAGTIME (and the cumbersome 1981 film by Milos Forman) and Sergio Leone's film, ONCE UPON A TIME IN AMERICA (1984) , all flood back from my memory banks, and support the wealth of these actor's imaginations, and illuminate the play, as I watch this performance.

The design (Adrienne Chisholm) is, perforce of the production being a touring show, a simple representation: a green wallpapered back wall, with window, door and built-in cupboard, laden with many, many female dance shoes, and a worn wooden board floor. There is also an opaque screen, artistically utilised for visual period 'sketch' support of period and private character 'fantasy' moments. The costumes, especially those of Ms Palmer, have the appearance and flair of the period and more importantly, conducive for dance aesthetics. Lighting, by reliable Luiz Pampolha, atmospheric, if a little general (Tour restrictions, I suppose). The Sound Design, however (Darrin Verhagen), is acutely detailed and nuanced, and relaxingly familiar, embracing sound and music of this era of dance, with the joyful syncopated 'ragged' rhythm of, say, Scott Joplin (remember the soundtrack and subsequent craze for his music emanating from the 1973 film, THE STING), coming to dominate the proceedings, powerfully, as the show progresses.

The director Stephen Lloyd Helper keeps a tight but delicate hand on the proceedings, never overplaying that hand. Deceptively, light. SYNCOPATION, playing at nearly two and a half hours with just two actors on stage, needs actors of real interest and stamina to hold and sustain our interest. Here, Mr Helper has found two wonderful performers and seems to have given them clear boundaries to invest in, and yet, all the space they want, to 'play' and create. Both these actors take on the challenge of what could be simple, direct musical theatre, sentimental impersonations and, instead, invest Henry and Anna with the unpredictable life force of frail, contradictory, fallible human beings. Real people.

It is clear that Mr Cotta is not a natural ballroom dancer, if, a dancer at all. What he appears to be is an actor who can move and has the iron discipline and will to fulfil the imaginings of Mr. Knee. Mr Knee sees Henry as a dancer, Mr Cotta believes Henry is one too, no matter Henry's ageing inadequacies, and that is what Mr Cotta delivers. The near final moments when Henry puts on a sequined vest that is now too small for him is deeply affecting for the naked courage of the actor to create a too true realisation (- tour eating, the actor confessed!) - pathetic, and still, self deprecatingly comic, because of the depth of truthful recognition and revealed identification by Mr Cotta. The blind sense of Henry's own 'beauty' is courageously played by Mr Cotta and his Henry is someone the audience can easily identify with, with great affectionate gulps of pathos. The choices that Mr Cotta brings to the creation of Henry are staggeringly diverse and wonderfully surprising, all with a true artist's instincts for a truth and love of his character. Clearly, Mr Cotta sees the opportunities for an actor in the role of Henry Ribolow, and plays them to the hilt. It is a more than satisfying performance. It is really good acting - a rarity, really.

Ms Palmer, as a dancer, on the other hand, in contrast to Mr Cotta, seems to have dancing skills galore and brings such wit and elegance to Anna as, necessarily, at the beginning of the play, a 'clod hopper', to, finally, a very accomplished performer, that one is entranced, choreographically, with her every gesture. In Mr Cotta, Ms Palmer has found a support to her physical expression and the innate trust that they appear to have on stage, as partners, is palpable. Ms Palmer is no debutante, either, in the acting stakes, and she has created a young naive woman of the period, Anna Bianchi, that blossoms, not only on the dance floor as a dancer, but, also intellectually and politically as an American citizen of the new century. It is a Pygmalion story as Anna transcends her teacher and takes off - the ending of this work is a little more romantic that the tough one that Mr Shaw gave us earlier this year, though. Ms Palmer has Anna blazing transfixedly in a confrontation with her Henry in an especially memorable moment in the second act.

Both these actors are highly intelligent and courageous with their gifts. In each other, it appears, at this end of a long tour, that they have, as well, found another artist that can, and will match their creative insights and juices. They reveal a voracious imaginative response to the characters, the world of the play and to each other. It is a pleasure to witness and lifts this skilful but schmaltzy play of a classic American genre into other, better stratospheres. It was most surprising and wonderfully satisfying.

Lastly, but no means least, there is a lot of dancing in this show and what makes the work lift magnificently is the crafted eye of the choreographer, Mark Hodge, who not only understands the dance and period he is evoking, but has managed to fit the movement to the actors and the actors to the movement. The integral intelligence of this is distinguishing and an immense asset to the play as experience. Congratulations.

Illawarra and Parramatta to go for the production. Find out where and when it is on and enjoy yourself. A well written play of its kind, made very rewarding as an audience experience by a gifted choreographer, syncopated music and two really marvellous actors giving their all to the lives of Henry and Anna. Mr Helper deserves credit for finding such 'syncopated' artists and managing them so felicitously. The audience I saw it with, laughed, cried and were very enthusiastic at the end of a long journey. We all bounced out to the bump of Mr Joplin.

N.B. I saw this on the night of Mr Keith Bain's funereal and wake. Both Ms Palmer and Mr Cotta are ex-students of Mr Bain. Those of us who had 'moved' our bodies for Mr Bain in Acting school, thought that these two artists exemplified his teaching and ideals for actors. We were moved doubly, for the two actors, and the evident legacy of the gentle master, Keith Bain.

P.S. Another theatre program without a writer's biography (see note at end of SHALLOW SLUMBER blog.) And, even worse, with NO information about the actors or the artistic team. What is it with the producers, A CRITICAL STAGE or THE FOLLIES COMPANY? I mean, just how much does an A4 copy cost of the artist's work? Disrespectful to the artists, and, too, to the audience, who may want to take home a record, of what otherwise is a very terrific night in the theatre.
Posted by Editor at 8:14 PM