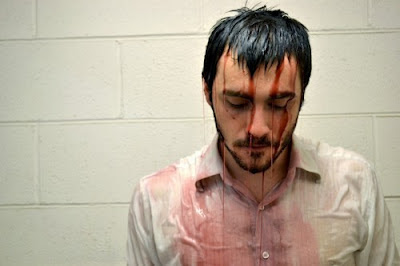 BLOOD PRESSURE is a new play by Mark Rogers. It is a very ambitious work, and almost works. Mr Rogers and his director, Sanja Simic have collaborated on an intense work. The subject matter concerning two siblings, brothers, one who can play the piano, the other suffering through a terminal illness.

The love of language usage is joyfully obvious, if occasionally a little overwrought, and the play sometimes stands still for too long, a little indulgent, and the ending not as dramatically impactful (maybe the staging?) as it could be, but it is of such resonant promise that attention ought, should, be paid.

Michael: I'm not telling you how to live, but that you should.

Wade Briggs as Adam, and Alexander Millwood as Michael, give astonishing performances. Their sensibilities and craft interdependence finally honed and comfortable. The casting is remarkable and one is left asking how real is real? The acting is, often, uncomfortably, moving.

For some audience members this could be a very difficult subject matter to witness, but the ambitious craft and art of this young team, is worth the braving of it.

From the Director's Note:

- Susan Sontag, in Illness as metaphor.

The Tamarama Rock Surfers Theatre Company, back on track. Independent Theatre showing the way, again. Modest, but, arresting, Worth catching as was THE SEAFARER and PUNK ROCK.

I was there last night and was almost totally satisfied. I even sat for quite a while after lights went up before I could move. Perhaps the ending has been changed since you saw it, as such a production should be free to do. (I even wrote to mark Rogers this morning with my comments and a suggestion.
The question of 'investment' in another's life and what rights (if any) that gives the investor, was so well explored and caused me to take a long hard look at my own life, ie, reason for the slow getaway!