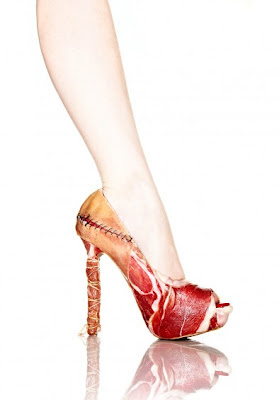 PORK STILETTO is the latest concoction written and performed by Warwick Allsopp and Tamlyn Henderson. Previous work includes, A PORTHOLE into the MINDS of the VANQUISHED and THE JINGLISTS.

Two ambitious and young psychologists begin researching sexual fetishes. That they become involved in 'field work' that leads them into 'immersive' experiences spells out ventures that become adventures they never anticipated. That the research turns into something else other than an objective thesis, becomes the source of much black comedy with very tongue-in-cheek thrills.Mr Allsopp and Henderson are aided and abetted by Louisa Mignone and Briallen Clarke.

Beginning with a very alluring soundtrack of a sado-masochistic movie thriller (perhaps), we watch a young woman being grabbed, chased, clawed and ultimately dragged into what one suspects, imagines, is a hell, with just an arm waving for help, as a trapdoor is slammed down on top of the disappearing hand/finger tips! The show, only 75 minutes long, finishes in much the same way, except, this time, (surprise, surprise) with a different female victim - what no men stupid enough to fall into this scenario? Lots and lots of "…isms", "…ilias" and "…phobias" are delightfully, amusingly explored in the two psychologists' studies, which become a source of attention to two detectives investigating a 'cold case' of murder, known in the files as, Pork Stiletto.

Everything that happens has a macabre veneer that can create a thrilled squirm and giggle. I laughed out loud often. This little show has an intense vigour, a quasi comic-seriousness about it - that is part of the fun - and a very slick presentation, directed wickedly by Iain Sinclair. I enjoyed myself immensely. I think. Much more adventurous and titillating then the Old Fitz show last year in a kind of similar territory: TRAPTURE.

I recommend it for the thrill seekers who can plant  their tongue firmly in their cheek. A must to see if this 'theatre date' is a first date. Much will be revealed and decisions on whether there will be a second date will be quickly known.