Quiet Companions and Bryce is Right 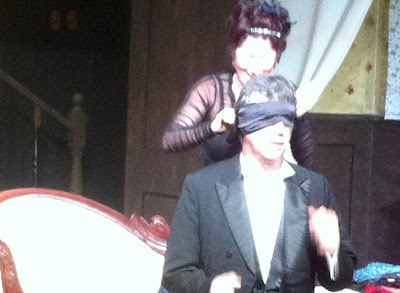 New Theatre present QUIET COMPANIONS and the BRYCE is RIGHT at the New Theatre, Newtown.

QUIET COMPANIONS is a partly improvised playlet set in, supposedly, the Victorian Era.  This is "a show that begins with a delightfully wicked twosome playing private games (that) slowly descends into an exploration of the dark, psychological country that lies beneath."  According to Marko Mustac the creator, director and one of the performers of this exercise in the theatre, the other being Lyn Pierce, he hopes that "unlike most improvised shows this is a serious piece: it is not meant to be funny ... It references absurdist theatre , post-modernism, a dash of Artaud's Theatre of Cruelty, whilst being steeped  in the fin de siecle  world of Oscar Wilde and the darker aspects of power and sexuality from the bible. Satan even gets a run, albeit in disguise." (Oh, really!)

Unfortunately, neither of the performers are steeped in anything like the world of Oscar Wilde - their improvised dialogue never ventured into the vocabulary of the period or to any of the divine verbal wit of Mr Wilde and others of his literary or social, political time - the performance revealed, in fact,  no real research of Victorian society and its mores, of any real kind; nor of the other mentioned references for the piece, the Absurdists, the Post-Modernists or any of the theories of Artaud, let alone the world of Freud or Marx quoted in the program.

So, the performance quickly descended  (ascended, depending on your point of view) into a set of well known games by Viola Spolin to inspire improvisational techniques. The resultant improvised text was, then, contemporary vernacular with a less than expert way with words of wit as weaponry, no "dandy" tradition here, resulting in QUIET COMPANIONS being fairly superficial in its intended aims. It, rather, quickly, moved into a set of typical exercises of comic ridiculousness, that may be part of a collection of a 3 minute Theatre Sports game sequence. If the work was not intended to be funny, then more research into the intended world of Victorian England would help, a deeper preparation of the characters and their relationship history and a less steady instinct for comic one-up-manship ought to be part of the discipline of the showing. Research and discipline.

Certainly, the audience sought laughter and once that was scented by the performers they went for broke. It seemed their insecurity with their preparation allowed the familiar safety of the actors' comic game personas to take over, only, too willingly. It was either that, or, a gigantic lack of courage. It was silly and funny, often, and well done, on that familiar 'playing field'. For, there is a largesse in the comic of Ms Pierce and Mr Mustac as there is a paltriness in their sense of what is motivated drama in QUIET COMPANIONS. The music improvisations by Bryce Halliday at the piano were the highlight of any sincere cleverness.

The companion piece to this Double Bill, the BRYCE is RIGHT, was a cabaret solo act by Bryce Halliday using a Hutchins Piano and other electrical gadgetry for effect  Young Bryce Halliday, a recent graduate (2011) of the Music course at The Australian Institute of Music (AIM), has a pleasant personality but his show is a more than clear demonstration that any performer is only as good as the quality of the writing. Songs, music and lyrics and the patter around them, are fairly lame and unkempt in their theatrical structures. Friends and family may have the patience to endure this, but for some of us, it felt like an interminable 'conversation' with a not very interesting social observer or thinker, and a fledgling musical performer. Some of us were longing for an exit. Respect and politeness  kept us there. We had recently been entertained by Barry Humphries in EAT, PRAY, LAUGH! and had some kind of recent benchmark, even considering Mr Halliday's youthfulness, to relate too. Mr Halliday should also note, that when one gives an earnest performance of a famous ballad such as, IF EVER I SHOULD LEAVE YOU, from the 1959 Lerner and Lowe musical CAMELOT, one had best be able to give a thoroughly prepared and peerless rendition, to justify its inclusion in the act. Parody it was, embarrassingly, not.

The performance revealed the youthful fearlessness of this ambitious singer/performer, Bryce Halliday but not much else to advantage his dreams. Precocity is not enough, I'm afraid.
Posted by Editor at 9:22 AM