I Want To Sleep With Tom Stoppard 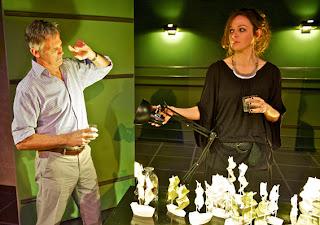 Tamarama Rock Surfers Theatre Company present I WANT TO SLEEP WITH TOM STOPPARD - a new play by Toby Schmitz at the Bondi pavilion, at Bondi Beach.

I WANT TO SLEEP WITH TOM STOPPARD is the latest play by Toby Schmitz - yes, that actor we read about in both the two major papers two weekends ago, who is about to impersonate Elyot Chase in Noel Coward's super erudite comic masterpiece PRIVATE LIVES for our delectation and, I hope, delicious appreciation. Mr Schmitz has also being writing for many, many years now, and he is pretty good at it. The last play I saw of his was CAPTURE THE FLAG and it was, as a play, fairly interesting. I have seen two different productions.

Rumour has it that, and, this may just be publicity 'pump', that Mr Stoppard himself, knows of this play, well, at least its title, and, was grateful that it was not: I WAS PUT TO SLEEP BY TOM STOPPARD. I can guarantee that you will not be put to sleep with this production of Mr Schmitz's play, although if you like the theatre, and, or, go regularly, the experience will be more wakeful than otherwise.

This play concerns a young actor, Luke, (Tom Stokes) who has invited his latest girlfriend, an older actress, Sarah (Caroline Brazier), the star of his last work engagement, to dinner with his parents, Jackie (Wendy Strehlow), a woman at crisis point in her 'wifely' situation and Tom (Andrew McFarlane), a self absorbed professional - a dentist - and naval history-model nerd!

The play is set mostly in the kitchen/dining room around the dinner meal and copious bottles of wine but, also, upstairs in the attic-model room. The format is that of a classic middle class comedy of manners. The experience will conjure David Williamson at his comic best, Alan Ayckbourn at his wittiest satiric best, or more contemporaneously, Yasmina Reza, the French 'genius' of this genre, last represented on the Sydney stages by that razor/reza edged, French version of THE SLAP called GOD OF CARNAGE - also a recent Polanski directed film.

Cultural discussion of the value or importance of the theatre, mixed, inter woven, interlaced, with the more animal sexual inclinations and lives of these people and their extended family, occupies us for most of the night. The first half is particularly scintillating and the knowledge that Mr Schmitz has of the theatre, and its value, aided, and, probably abetted by the dinner conversations of his extended 'families' - theatrical and otherwise,  make for a listen and laugh fest.

All of the performances are wonderful. Wendy Stehlow's Jackie, recognisably brittle - a woman taut and ready to detonate witheringly, she will either grow or explode, this space cannot be ignored any longer; Andrew McFarlane as Tom, blithely arrogant and outrageously opinionated, giving a performance of subtly cruel observation with elan and elegance that the man may not deserve, but is enhancing to the comic touches of the writing; Tom Stokes as Luke, young, naive and deliciously self deceived and finally, moving; and Caroline Brazier, as Sarah, a mature 'gorgon' of the theatre - not to be challenged or trifled with, especially about her ART - giving a performance that might in Australian performance legend or fable, come to rival, for those of us who know, Bette Davis in her film performances as Regina Giddens in THE LITTLE FOXES, or, better still as Margo Channing in ALL ABOUT EVE. Every musculature of body, voice, brain and emotion is coiled for devastating affect, by Madame Brazier: to reveal a lived life of theatre frustration, of lack of recognition for her art form, mafnificently unleashed in Sarah, as representative for herself and all of her "sisters" of the art, for our delight. Mr Schmitz tells us that Sarah had her genesis in "…the many actresses I have had the benefit to know, and in my twin desires to write a complex character who keeps shedding layers, and an unashamedly explosive femme fatale for one of them to play'' and he has done it.

Directed fluidly by Leland Kean, designed well if, necessarily frugally, perforce of budget restraints, by Natalie Hughes & Vanessa Hughes, but basked in the glow of Luiz Pampolha's lighting and wrapped wittily in the sound design of Jeremy Silver, this Independent Theatre production sits beside other recent representatives  : THE SEAFARER, PUNK ROCK , as well worth your patronage and give the major houses something to regard seriously as real alternative Bang for your Bucks.

A good night at the theatre, especially for theatre addicts who can appreciate the 'camp' of it.
I enjoyed myself immensely.

Although, I should say, I prefer the subject matter and intentions of CAPTURE THE FLAG to this. But, both plays are wonderful in their genre-specificity. Mr Schmitz, indeed, a real man for all seasons, ah, skills?

I look forward to Mr Schmitz's furore, when he tackles the big world around us, other than theatre and sex, or theatre, or sex. Mr Stoppard has written like this (perhaps the theatrical trickery of THE REAL INSPECTOR HOUND),  and then progressed to darker and more complex witteries. I hope Mr Schmitz does indeed sleep with Mr Stoppard, perchance to dream, in the stratospheres of Mr Stoppard's other worlds. In the meantime, see this.