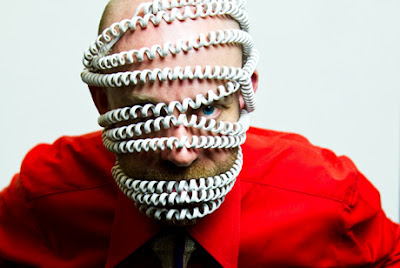 THE LUNCH HOUR by Chris Aronsten is a wildly ambitious play. It begins as pell mell farce with characters, initially perceived as possible satiric types that move into the second act of the work to a dark psychological critique of a most challenging kind, to finally launch into one of the bleakest music theatre climaxes that I have seen since the last production of Stephen Sondheim's ASSASSINS.

Six struggling artists who in the languors of their careers work in a call centre. This call centre being (tres cruel on the writer's part!)) a booking office for theatre performance. The real business work of the call centre, supervised by Martin (Gerry Sont) is subverted with theatre games and competitions, especially with the group writing of a play for a prize. Each individual (and, one pair) participate in writing different sections, to be collated and submitted. They do this with great invention but dismal output. Their shenanigans taking more priority than commitment to product. Their denigration of their boss Martin being a well spring of collective motivation.

The second act begins with the revelation that Martin has also written a play and won the prize. Worse, the workers discover it is an observation of themselves, their quirks, shortcomings stacked with penetrating insights. That, perhaps, the safety of the call centre may be the world of their ambitions, their cocoon from outright failure, as each is shown to be, in various ways, the subverters of their own dreams. A bitter pill indeed. A "bitterer" pill as it was penned by the much denigrated boss -"Daddy" Martin.

Mr Aronsten earlier this year presented another work of his own, MALICE TOWARDS NONE. It was made up of three separate monologues. All of them representing societal 'refuse', societal losers. The work was painfully real and the performances, especially of the first two pieces piercingly, frighteningly real. The characters could have walked in from the streets of Wooloomooloo onto the Old Fitz stage and just started talking. Mr Aronsten's writerly focus on the losers of this world is accurate and maybe, in this case of THE LUNCH HOUR, a bone too close for  some comfort zones. It is a bleak assessment of a world that many may have known, still know. It is a tough play for certain members of the audience.

The Director, Kate Gaul, has affiliations with this writer, having produced another of his plays, THE HUMAN RESOURCES, a few years ago, and she has brought her considerable talent to bear on this work. The technical comprehension of farce as a form and an equal talent for the revelation of the 'pathetic' dramatic psychology of character, and an embrace of the musical theatre form, are all on exhibit here. There is simple but detailed Design work from Charlie Dugdale, enhanced by Luiz Pampolha's Lighting. The Composer/arranger, Darryl Wallis has created a wonderful aural world and the chaos of the physical world is wonderfully managed by Fight Choreographer, Diego Retamales and Dance Choreography by Kirby Burgess + Ash Bee. Considering the farce apparatus needed to bring this work to a clockwork precision, perhaps, the Stage Manager Elizabeth Rogers should get a mention as well - a whizz with all those sound cues!

Unfortunately, the performance itself does not quite work. The first act requires a pell mell of farcical action, that has very little ease from a created real world to help us, the audience to acclimatise and assimilate. Angela Bauer (Catherine), seems to be preoccupied with technical comedy and does not help us realise the world of the play or its style. It is over-acted and, at my performance, forced. I believe that comedy is the hardest of the forms to bring off, and that the importance of being earnest to be the key : terribly serious in needs, is the primary task and duty. Being funny, or commenting on what should be funny is not useful. The other actors, Branden Christine (Fran), Briallen Clarke (Felicity), Shaun Rennie (Chris), Sonny Vrebac (Simon) along with Mr Sont and later, Bali Padda (Ali) all are successful, or, not, to various degrees and at different times. The first act then is as an experience quite disconcerting and puzzling. What is Happening? What is real? What is Funny? So much is going on and none of it has a ring of real truth. Style over truth. Technical drill dominating lived character truths.The second act has a stiller and more controlled centre and the background and exposition of character is exposed to us in a more comprehensible manner. One is gradually drawn to a state of empathy.

This year we have had some brave and interesting explorations in satiric farce by our local writers : PORN.CAKE, A HOAX and now this work. The skills for all the artists are very demanding and THE LUNCH HOUR does not have the acting experience to pull off the kind of derring-do required to introduce us to the world 'speeds' of the play and sustain a believability for the audience. The world and people of this play come from a view of the world that is dark and tough as Alan Ayckbourn at his darkest and cruelest, THE REVENGER'S COMEDIES, for example.

THE LUNCH HOUR is an ambitious play and production. If you have the patience to return after the interval, this production does begin to reward you. See what you think.
Posted by Editor at 11:21 PM

I agree that act Two was much more enjoyable.

Act One was very "busy"- most of it was about how the various characters had not done their fair share of the writing of the play and this hammered on for quite a while. It almost felt that there was not enough substance going on because the characters were really all peas from the same pod.

The delightfully funny Ali in act Two really elevated the play to another level. Plus, there was the revelation of the various failures in the lives of the characters, contrasting with the frantic events in Act One.

I enjoyed the play especially Act Two which was worth seeing.

Kevin, was there something going on between Chris and Simon? It seemed like it was implicated but no real resolution (though I might have missed it or it might have been quickly glossed over.)

I too glimpsed something going on with Simon and Chris behind the back of Felicity and it was wiftly resoved, (I think) but not explicitly. A mystery to me, I'm sorry. The text was on sale, it might clear it up for you. Kevin J.