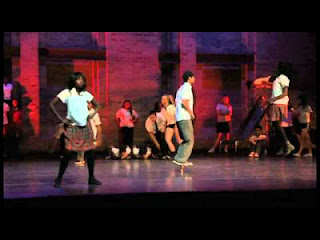 Captivate and Shaun Parker and Company presents THE YARD, at Riverside Theatres, Parramatta.

THE YARD is a dance work created by Shaun Parker and Company along with Captivate. Shaun Parker and Company are well known to us, especially because of HAPPY AS LARRY (Seymour Centre) - a work I especially liked. Captivate, on the other hand, is new to me. It is "the Catholic Education Diocese of Parramatta's creative and performing arts initiative for students in Western Sydney primary and secondary Catholic schools." NINE participating schools make up the cast of this show - from Rooty Hill, Hassall Grove, Marayong, Mount Druitt, Blacktown, South Windsor, Glenmore Park, Dundas, Emu Plains.

Supposedly, using the William Golding, LORD OF THE FLIES as inspiration, THE YARD explores the interaction of youth in the playground. Using the natural interests and skills of these students, Shaun Parker has fused a work that is as powerful in full flight as it is in the stillness of the individuals and collective on the stage. "Break dance, locking, popping, tutting, krumping, and jerk forms of dance found on the streets and in the school yards, of Western Sydney" combined with the sporting physical prowess of the basket baller, soccer player, martial artist and the idiosyncratic skills of some of the artists ,such as a "balancer", are all incorporated into a totally exhilarating and amazing experience. A Production with a shape and entity.

What is devastatingly exciting, is to see the commitment of these non-dancers and, best, the multi-cultural range of artists on the stage. African, Asian of many countries and Caucasians as well all explode in a spectacle that one only dreams about, to be seen on the Sydney stages, except in Festival events. Here, in the west, at Riverside, under the curating skills of Robert Love and Company, this theatre is leading with the invitation and maybe, empowerment, of the full breadth of a community make-up. Better still it doesn't feel like a token deal, either, it feels rooted and organic, an expression of the culture of the schools, the area, the West of Sydney. What Riverside Theatres can represent for a community. Participate, collaborate with.

The sophistication of this work is not just the physical dynamics of groups of energetic dancers or the whole collective energy, blowing out into the audience, though, it is irresistible, but, even more palpably,when the single dancer and, or, body of dancers just stand and pose for us. The centred stillness, the radiating confidence of identity and comfortability of the expressed right to be in that place in front of us is honest, raw and a propitious symbol of a complex theatre future. All power to them.

Much credit to Mr Parker. The simple setting and the effective lighting combined with a spot on eye for costume design - school uniforms, I assumed - all motivated to move by an absolutely inspired, detailed pumping composition by NIck Wales leaves one in an ecstatic state. I want a CD copy, please.

I had got up at 6am, went to a Currency Press Breakfast, to hear the inspirational Penny Chapman talk in the Tea Room in the QVB about film and television production in Australia; caught the train to Campbelltown, where I am, at present, an "Artist-in -Residence" with the Campbelltown Arts centre, working with some amazing adults with disability to build a performance, with several other centres in the outer fringe - it was their 'Olympics' and I participated in the relay and egg-and-spoon race (lost both, no medal for me) - before getting down to rehearsal; caught the train back to Granville and then out to Parramatta to see this show. I had to organise my rehearsals by iPhone for my production of Shaw's SAINT JOAN, on the train, for the community theatre of the Genesians - a psychic balancing act - I hoped Joan was helping- she was; deal with a bloody-faced victim of physical abuse in the park across from the Riverside Theatres, washing his dripping hands and phone on his blood smeared white hoodie, as I had time to spare, disturbing my Book Club duty: THE SONG OF ACHILLES, and holding my tension in, as a police car with siren blaring passed us by - my bloodied friend was very tense indeed, until the car disappeared; watching the Channel Nine 6pm News in the Sebel Hotel foyer, before being flooded with what seemed like an entire visiting high school of athletes, before having a pizza at the Church St Restaurant enclave. I was tired (!)  as I collected my ticket at 7pm for the showing. THE YARD enlivened me tremendously. Inspiration for living in 2012, indeed. After the performance I walked with a spring in my step to Parramatta station and caught the train with connections back to Bondi Junction; Patroclus and Achilles set off for Troy, Iphigenia having been sacrificed by Agamemnon for the winds from the Gods; a bus to Coogee and walk down the hill, home, where I bubbled enthusiastically about THE YARD, the young artists (kids), Shaun Parker and Nick Wales. A day well spent.It was approximately.10pm. I had a cup of tea, Some news on television and so to bed.

Again, a day well spent. All it takes is art like THE YARD and I feel I can do anything.
Posted by Editor at 11:33 PM

Glad the visit to the Yard at R'side energised you to the degree it did.

We will see what we can do to keep your energy intake up to scratch in the future.

Thanks for your very kind words about R'side. Appreciated