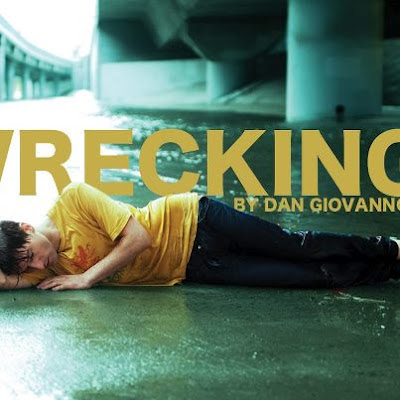 WRECKING by Dan Giovannoni is a new Australian play that deals with two groups of people, from widely different social opportunities, living next to each other in the same approximate spaces - perhaps, somewhere like Sydney's Wooloomooloo (the play was inspired by a true event).

A dentist, Miles (Matt Hopkins) and his civic-minded wife, Alana (Kimberly Hews) are living in a renovated terrace, and nearby are two 'floating' lost souls living on the streets, Ned (Paul Blenheim) and Lexie (Amanda McGregor), who may have the Matthew Talbot organisation as their principal resource. The play attempts to suggest might what happen, if, instead of ignoring each other, and stepping around each other, which is the social norm, that there is an interaction between these people of diverse backgrounds. Miles, particularly, becomes entangled with the heavily pregnant Lexie. Lexie is co-dependently attached to Ned. Alana becomes defensive of her 'territory', her home and husband, and employs a thug,Van (Peter Maple) to 'clean-up' the area.

The play sometimes seems to become over elaborate (e.g.the sexual appetite of Alana), in the mechanisms of its plot motivations, and became becalmed. It does not move easily or clearly forward - and does not have enough of the poetic compensations, of say the beautiful opening monologue of Ned's, to allow for these languors to be satisfying. For, there is some beautiful writing, and this is especially true, in the text given to Ned, a lost boy, living through casual sex and drugs, with imaginings and fantasies of mermen. The opening monologue is rapturously attractive and surreal in its ability to engage one. I felt some real excitement with the first ten minutes of the play and was only re-captured, now and again, with the same intensity. Some examination of the structural 'tools' could streamline the work more consistently.

Paul Blenheim as Ned, is outstanding in his performance and Amanda McGregor intensely engaged in the feral creation of Lexie. Too, Peter Maple, has an ease with his, generally unrewarding, underwritten, role, as Van. Mr Hopkins and Ms Hews have some difficulty in bringing the middle class couple of Miles and Alana fully alive, the relationship between the couple does not seem to be clear and I am not able to discern whether it is the writing or the slightly under-focused acting. Mr Giovannoni clearly has a more successful imaginative invention with the underprivileged characters.

Owen Phillips has designed a beautiful set as background (a miniature sculpture of a highway flyover), whilst leaving the small acting space flexible with an economy of properties. The lighting design (Sara Swersky) and the sound design (Nate Edmondson) are adequate, but Gin Savage is not very subtle in the shifting of emphasis with her light and sound choices and they seemed to draw attention to themselves.

The experience of WRECKING is interesting and of promise, some of the writing beautifully poetic, but, ultimately the production is uneven in its effect.