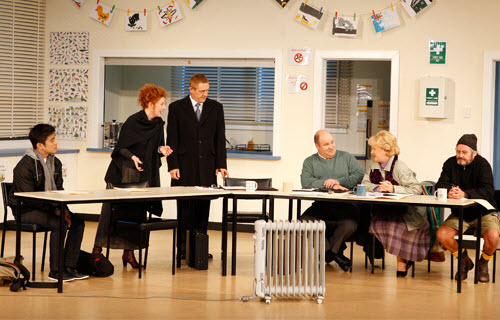 AUSTRALIA DAY by Jonathan Biggins is an amusing, 'comic-strip' sketch scenario, a "softly' satirical comment on contemporary Aussie social and political mores that we, the audience, recognise as part of our daily lives, involving some classic, characteristic, Aussie types, whom we, also, recognise.

Transfer your knowledge of the commedia dell'arte or the Moliere character 'types' to the Aussie milieu. The highly prejudiced but heart of gold irascible hard nut: Wally (Peter Kowitz); the smooth, handsome political operator with a smarmy hint of 'corruption' around his wholesomeness: Brian (Geoff Morrell); the do-gooder moraliser that has not, when push comes to shove, the spine of their own principles: Helen (Alison Whyte); the dim witted but 'salt of the earth' practical person who always muddles through: Marie (Valerie Bader); the token 'I can take whatever you throw at me' outsider and still have a determinate fate about survival: Chester (Kaeng Chan); and the non-protesting 'work horse' who endures all because he is a good bloke of simple honesty, and, trusts that that will keep him from harm, in good stead: Robert (David James).

All these characters are a comfort of easy recognition for us, and Mr Biggins has added some small clichés of back story to flesh them out beyond the 'revue' types that he usually gives us (the famous "Wharf Revues"). On the afternoon I saw the show, the mostly, elderly audience, enjoyed themselves immensely, although some about me were critical that the show was just a little too politely incorrect. They wanted it tougher.

The very real sets of the school staff room and the inside of the central Australia Day tent by Richard Roberts were fun. Technically, Lighting Design (Niklas Pajanti) and Sound Design (David Franzke) were clear in their support of the enterprise. Richard Cottrell has directed the performances seamlessly with a great eye for detail and discipline. It is clockwork perfect with just the right gentleness of overstatement, necessary for this kind of work.

AUSTRALIA DAY, then, a harmless charming time in the theatre. Without the expertise of Mr Cottrell around this play, what a shambles it could have been. It's flimsiness is deceptively hidden with Mr Cottrell's skills and his direction of the actors, all good, particularly Mr James (although, there seemed from Mr Morrell, sometimes a lack of concentration and complete commitment, at my performance, that caused much actors' mirth on the stage, to my elderly audience's bewilderment).

Richard Cottrell in his program note says that "Jonathan (Biggins) is asking us to look at ourselves and think about what we see." He then goes on to quote from Ben Jonson in his prologue to EVERYMAN IN HIS HUMOUR:


But deeds and language such as men do use
And persons such as Comedy would choose
When she would show an image of the times
And sport with human follies, not with crimes.

The Cottrell/Biggins partnership at the Sydney Theatre Company began with TRAVESTIES, by Tom Stoppard, and one longs to see that level of task challenge again. Still, Mr Cottrell has stooped and conquered as AUSTRALIA DAY works on many pleasant levels, not the least of which was, I laughed out loud, quite a few times.
Posted by Editor at 10:11 PM