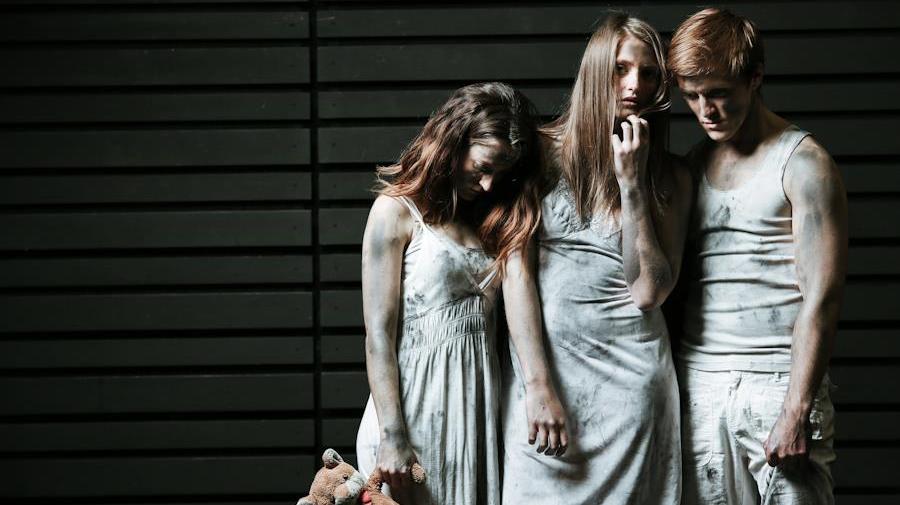 FALLOUT. This is a new play by Maree Freeman. Last year we saw Ms Freeman's PICTURES OF BRIGHT LIGHTS at the Bondi Pavilion (May, 2011).

I didn't comprehend much of this play in this production.

The publicity card tells us:

In a sealed off room, strewn with broken toys and dress up clothes, the final frontier to freedom must be conquered. Alpha (Gabriel Fancourt), Bravo (Lizzie Schebesta), Charlie (Amanda McGregor) and Delta (Michele Durman) are four teenagers trapped within this world. With no intervention, they must create their own rules as they try to learn what pleases them who watch them.

From the writer's notes in the Program:

As children we possess such a natural sensitivity that is so highly attuned to the world and people around us. We can feel everything and sometimes emotions are so strong that they feel like they sit physically in our bodies. With 'Fallout' I'm interested in the idea that as we grow up we seem to learn how to compartmentalize these feelings; we learn how to disengage and distance ourselves from the violence and human suffering that we are confronted with. Is this a natural reaction to stress? A coping or survival mechanism? An inherited norm? Or a choice that each individual makes to feel that they belong?

'Fallout' is a play that speculates around this moment of individual choice for four young people as they are asked to abandon childish notions of empathy to find, in the world of the play, something more acceptable, sustainable and adult. It is an examination of the personal struggle inherent in this choice and the corruption of innocence that follows…

Kip Williams the Director of FALLOUT, worked intensely with Ms Freeman in the development of the work.

From the Director's notes in the program:

In 'Fallout' Maree employs her unique imagination in capturing that liminal moment where a child teeters on the edge of adulthood. In doing so, she does away with our contemporary compartmentalised thinking on this transition as being one of the stages of childhood, tweendom, teendom and young adulthood. Instead, she locates something more essential, presenting childhood and adulthood as two separate universes, and showing the shift between them as a single moment of initiation or loss of innocence.

For the four characters in the play, their quest for freedom echoes our own desire for acceptance in an adult world. The transition they seek comes with inevitable changes, and it is the nature of these changes that Fallout is most fascinated with. At its heart, Fallout burrows towards an understanding of what happens to a child's empathy as it shifts from a place of unquestioned sensitivity to one of emotional restraint.

The lengths the characters in Fallout will go to in order to earn their release are brutal and ultimately deeply heartbreaking. This is not a piece that pulls any punches. It talks to ideas about how we cope with the suffering in the world around us in order to survive.

When we entered the Old Fitzroy theatre we saw a beautiful architectural design (Adrienn Lord). The floor of the space has been slightly raised and the surface covered with a generous depth of black soil and front edged with a white border. Some sturdy, white column/blocks with indented tops to allow the soil to appear further, stand on one side, intruding into the space, to be used, not only as places to conceal the characters, but as stairs to the upper 'mezzanine' roof, where there is an old abandoned couch, a refuge for the 'children' of the play. Around the space are some toys/dolls smudged and grimed with the dirt. The white back wall of the stage space can glow in the atmospheric lighting of Nicholas Rayment. Visually the costumes (Adrienn Lord) of the children are dirty, except for the new arrival, Delta, who appears in a clean white dress. This dress is besmirched and degraded progressively during the action of the play. This design has, to my mind, the positive aesthetics of an Art Installation in a gallery, which has included live performers. Is the text necessary for this installation? Does this installation elucidate the play and the above aspirations of the writer and the director?

I noted that Mr Williams with another designer, Emma Kingsbury, had last year in one of the NIDA theatres come to a startling, similar solution to the presentation for The Sydney Chamber Opera of I HAVE HAD ENOUGH. A dirt covered stage with performers in white clothing that gradually became filthy during the actions of the play (- no chocolate cake, here, though). Clearly, Mr Williams saw a direct correlation to the thematics and action of the two works and felt that this visual installation conception was useful for FALLOUT as well as, generally, the other work. Unfortunately, for me, the design choices in FALLOUT were as obfuscating to story clarity as that similar design was for I HAVE HAD ENOUGH… (I also noted this 'fussy' visual tendency in Mr Williams' work for the Sydney Theatre Company this year with UNDER MILK WOOD). I was attempting to make sense of this design within the action of the play. It did not seem to compliment the play.I became lost. It did not seem to make a 'whole'. It was a distraction.

My experiences of the writing of Ms Freeman's plays PICTURES OF BRIGHT LIGHTS and FALLOUT are, to be taken into a very poetical but abstracted, lateral expression. It requires, of me, an intense concentration, as the style of the work is extremely idiosyncratic - not often met in the Sydney Theatre experience. I need, not only to pay attention whilst there, but also seem to require a 'debrief', of a sort, after. I need time after, (not a bad thing), to grapple with the material. I kept thinking of the many puzzles of the theatre work of Caryl Churchill, particularly the later work e.g. FAR AWAY (2000) and A NUMBER (2002) (I understand that Ms Churchill's latest, LOVE AND INFORMATION is similarly challenging), whilst watching this work. It is linguistically and stylistically challenging. Because of this 'challenge' I suspect the acting style needs to be careful, and, focused on the objective, word by word disentangling. It needs a kind of inviting attentiveness. It needs to place an audience into an objectively curious place. Listen and you will learn.

In this production, by Mr Williams, there seemed to be an encouragement of the playing to heightened emotional states, to be lived and expressed by the performers, in a kind of frenzied hysteria (- it was from the get-go!) It resulted in acting that was very shouted and disengaging in communication. It muddied, alarmingly, my ability to hear the text. It pushed me away from the material. I could read that these characters were in a stressful world where, being 'alive' or 'dead' was at stake, clearly. What I couldn't discern, because, either the writing is too opaque or the acting too subjectively emotional, or, both, was why. Why? Why are these people behaving like this? What are they saying? What is happening? I was not able to listen and learn. I, rather, had to defend myself from the emotional battering and withdraw - sadly, a lot.

Mr Fancourt, as Alpha, was the one actor that I was able, relatively, to center myself with, to hear and begin to comprehend. Ms Schebesta, and McGregor were whirlwinds of emotional content, sometimes pink with effortful expression, with little textual clarity. An impenetrable patina of emotional extremes, vocally and physically, prevented any deeper understanding. Ms Durman, arriving a little later in the play, attempted to ground the work, but, faced with the 'acting offers' of the other two women, was soon swept up into the 'hurricane' temperament of the acting 'style' - the dirtier her dress became, the less control, Ms Durman had, and, consequently, the less interesting the character became.

One wonders if this alienation effect, this hyper-noisy acting was what Mr Williams was seeking. To offend us. If it was it was at the expense of Ms Freeman's play. This welter of incomprehensible noise and emotion, underlined, later in the play, with a gesture to the theatre of cruelty of yesteryear, with a gruesome moment of the visual and, particularly, aural, crunching of the fingers/bones of one character by another were truly moments of squirming in one's seat. One was aware that one was in a theatre. Here, the sound design by Nate Edmondson, including this finger crunch, was outstanding, in its moment to moment attention (2012, a busy, prolific, year for Mr Edmondson),

In the quoted program notes above there is an academic clarity of the intentions of the writer from both these collaborators, Ms Freeman and Mr Williams and, whether they were too close to the material, or not, the physical embodiment of those intentions on the Old Fitzroy stage, on the night I saw it, were not at all apprehensible. The design aesthetics, the control of the acting (or, the encouragement of the 'style'), the 'affects' of production by Mr Williams, seem to come from an exploration of theatre history notions and seem to be imposed on the material, instead of organically evolving from the material. I would be interested to see another production of the play that is written, to be able to judge this suspicion more accurately. To hear the play that Ms Freeman has written.

When waiting to enter the Old Fitz theatre, by myself, a group of strangers/friends, each with glasses of beer and/or spirits, wines, gathered behind me and warned me that they had heard the play was a bit on the heavy side, and that I should get some fortification. As I was leaving, they said, "We warned you." I don't think the fortification would have made it easier.
Posted by Editor at 1:53 PM