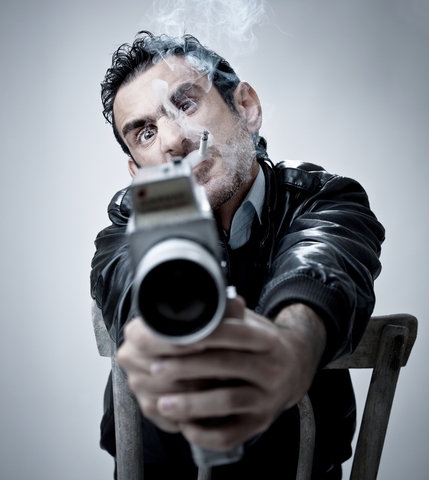 Arts Radar, Theatre503 and Griffin Independent present RAPID WRITE: HOLLYWOOD ENDING or, How A Washed up Director Made a Crappy Movie that Almost Destroyed the World by CJ Johnson at SBW Stables Theatre, Griffin, Kings Cross.

In HOLLYWOOD ENDING, Don (Terry Serio) is a filmmaker of pornography, a director at the 'lower' end of the Hollywood industry. He has ambitions, as all who work creatively do, to make a work that is 'great'. Amy (Briallen Clarke) is a film producer working with Randy (Blake Erickson), a writer. They have a project with a small budget that they wish to be made before the election date of the next President. It is a small window of time. Their ambitions may be for more than 'artistic' greatness. They decide to offer Don the responsibility. Don sees this as his chance. Don engages his daughter, Laura (Caroline Craig), to come on board as the first-assistant. Laura is skeptical of her father as a person, and becomes even more skeptical, and more alarmed as the project reveals itself, more apparently. Jerry (Tony Llewellyn-Jones) is a designer, a creative facilitator, who has often worked with Don.

Most of the play deals with the hazards of movie making, or especially, how a washed up director ended up making a crappy movie.  The play is an expose (satire?) where the compromise of money, time and the creative vision undermines the aspirations of the participators.  It is, on this level tightly written, sometimes amusing, but, a very familiar journey. A comic strip of character and action.

There is, however, a darker weave within this story. Gradually, we get to see that HOLLYWOOD ENDING might be a light veiling, revealing the making of a film resembling the recent YouTube sensation, INNOCENCE OF MUSLIMS. A sensation of woeful art that caused, almost, a major international incident of incendiary proportions. Riots around the world, in the CBD of Sydney, even (16th September), protested the work.

These consequences and the possible motivation behind this film seem to me to be the really interesting subject matter of the play. Unfortunately, this play ends, when it makes this clear or clearer. The second last scene of the play between Don and his aggravated daughter, Laura, gets to the 'meat' of a possible play, that may have had some real social concern. Add the last scene of the play between Don and Amy and the diabolical underpinnings of the event of the play become appetising. The play ends where it really should have begun, I reckon.The interesting subject matter  became the tag of our night in the theatre, rather than the substance of the writing. The comic 'piss take' of the film making process, is not all that original or interesting. I came out asking: Who Cares? Who cares about the history of the making of any film, mediocre or otherwise? But, the debate arising from the characters Laura and Amy with Don, in those last scenes, I would like to get to terms with, to hear more of. Even, the psychological characterisation of Don and his dealing with temptation in mediocrity would be more arresting.

The idea of this project, RAPID WRITE, is an attempt to create a play from "page to stage in 8 weeks." CJ Johnson, the writer tells us: "Tim Roseman (Director of this production and the new Artistic Director of Playwriting Australia), who pioneered the RAPID WRITE program at his Theatre503 in London, says that it was borne out of the frustration that plays tended to take at least two years to hit the stage, by which time, if they were about topical issues, they had lost their urgency, their pungency. Plays borne out of RAPID WRITE hit the stage nine weeks after their inspiring incident, whatever they might be."

HOLLYWOOD ENDING, as it is, lacks, "urgency', lacks "pungency". So, is eight or nine weeks too long for this process, if you want topicality? It seems so, if this is typical of the writing that comes from this challenge. This play, inspired by INNOCENCE OF MUSLIMS and the furore it caused, is, of course, long past its incendiary topicality (not, of course, in the bigger moral picture of concern). Too, the election of the American President is of no real vital topicality today - we know the result! Is it  a sign of the frenzied speed and appetites of the media crazy era we live in?

Now, on the Friday night I saw the play, maybe, my topical concern was:the bikie-'war' shootings in the suburbs of Sydney; the Australian Indigenous issues; the Climate Change Debate; the Sexual Abuse Scandals; Cardinal Pell and the Catholic Church, local and international; the present demolishing of the dignity of the Federal Parliamentary system, and a respect for the democratic process, Abbott, Bishop V's Gillard; the Obeid family saga and State Government corruption.; Mr O'Farrell, Packer and a casino. These were topics of interest for me as HOLLYWOOD ENDING was told on Friday night. The INNOCENCE OF MUSLIMS film, long past my immediate, topical concern, and the history of making a crappy film is much to familiar a story, no matter how lively the telling, to hold me in a spell of rapt bewitchment.

Though, lively, the telling is. It is a very tight production. The direction by Mr Roseman is impressive - the skills of keeping these short scenes moving, the spiffy set design by Rita Carmody and the Lighting by Hartley T A Kemp are arresting. The writing, within its field of play, is good too. It just lacks any real interest, for others, other than artists, perhaps!? Mr Roseman has also encouraged an acting bravura from this company, that keeps the piece from wearying us with its familiarity. The acting is exciting - however, throwing  up a very recognisable pattern, in my history of theatre going with new Australian plays, where, the actors, sometimes, have to do much more for the writer than the writer offers the actor. Mr Serio, a tireless backbone to the piece,  a desperate man facing  the fatal Faustian offer of eternal fame (life) or oblivion, supported wittily with a performance from Mr Erickson as a total creative 'dumb-ass', and Mr Llwellyn-Jones as a sanguine survivor in a familiar world of mediocrity and compromise. Ms Craig hits her mark in her last scene confronting her father, and Ms Clarke reveals, cumulatively, a malevolent force of some power - ice-blonde cool, neat and dangerous. Her last scene - Kapow!

HOLLYWOOD ENDING is well done but, ultimately, shallow. The parameters of the project may be too limiting!? The last scenes of this play triggered off memories of Stephen Sewell's MYTH, PROPAGANDA AND DISASTER IN NAZI GERMANY AND CONTEMPORARY AMERICA, only, in the sense, of course, of the darkening conspiracies intimated by CJ Johnson here. I would have liked to wander into that scape. Suggested,here, but, not delivered.