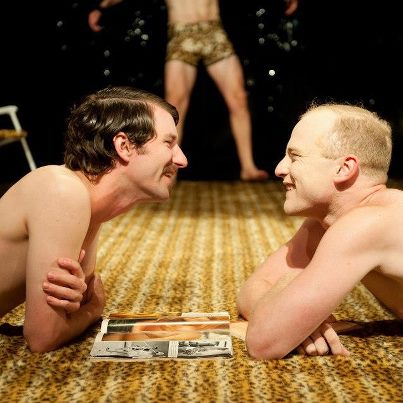 Little Ones Theatre in association with the Tamarama Rock Surfers present PSYCHO BEACH PARTY by Charles Busch at the Bondi Pavilion, Bondi Beach.

Look, PSYCHO BEACH PARTY by Charles Busch, at present to be seen at the Bondi Pavilion, is just, great, great FUN. For most of the 'folk' I know well, a show not to be missed. I mean if you want big laughs and a show that reeks with an expertise of gleefully wicked innocence and glad bags of high style, than, this is a must see.

I know I went crazy for the Belvoir's take on THYESTES, directed by Simon Stone at Carriageworks in January (I did), and some of you found/thought I had gone completely over the top, well, I feel the same about this show, but ,of course, differently. This is silly exhilaration, not 'f.....ed up' exhilaration - there's no blood to start with, and I think you could take your kids. I, of course don't have any kids, so, I could be wrong.

This show was once called GIDGET GOES PSYCHO, and "Theatre-in Limbo", unlike a certain theatre company, which I won't name, thought that maybe there might be some 'copyright problems" and changed it to PSYCHO BEACH PARTY. Oh, well they do work in New York, not remote Sydney, you know, so they had to be careful and do the right thing. Mr Busch and his companion in art, Ken Elliott, sprung from watching, perhaps too many times the phenomena of the Frankie Avalon/Annette Funicello Beach Party movies - six of them made between 1963 and 1965! - including, and here is a clue to the show at the Pavilion: MUSCLE BEACH PARTY and BEACH PARTY BINGO; and the TV show GIDGET, put together a new show to replace, in 1987, there long running hit, VAMPIRE LESBIANS OF SODOM, on Off-Broadway.

Says Chicklet, the heroine of our show, who happens to channel multiple personalities - think, THREE FACES OF EVE, 1957 (Joanne Woodward) or SYBIL,1971 (Sally Fields), and don't forget THE BAD SEED, 1956 (directed by Mervyn LeRoy), to get the psycho-thriller pop culture vibe - to her man Kanaka, a Beach Surf Board Hunk:

"I think we understand each other very well. I know what you fantasize about, I know what you dream about and I'm going to give it to you in spades. Now I want you to go into town and buy yourself a slave collar and a garter belt and a pair of black silk stockings. Spike heels will complete the ensemble and then my darling Kanaka, I'm going to shave all that man fur off and you'll look just like the little boy that you are.'

You get the picture? John Waters (and Divine) can eat their hearts out, this week. So, can early Pedro (Almodovar, that is). Why re-run those tired old movies you know by heart, at home, when you can watch this show LIVE?

"VAMPIRE LESBIANS of SODOM, one of the longest-running plays in Off-Broadway history, PSYCHO BEACH PARTY, and THE TALE OF THE ALLERGIST'S WIFE have earned Charles Busch renown for his ability to weave popular culture, wicked camp humour, and biting social satire into unusual and uproarious theatre. Busch has been acclaimed as the premiere drag star of the American theatre, and his work has earned the Outer Critics' John Gassner Award for Playwrighting and a Drama Desk Award for Best Play nomination. He has been called a "first-class satirist and farceur" (Mimi Kramer, The New Yorker). THE ALLERGIST'S WIFE also received a Tony Award nomination for Best Play in 2001.

Now, I should add that I have seen other attempts to bring Mr Busch's work to the stage and they have been , generally, disastrous. It is very, very difficult 'stuff' to pull off. The stylistic sensibility needs to be very special indeed. This company, Little Ones, led by the Director, Stephen Nicolazzo (the recent showing of the Singaporean play: SEX, VIOLENCE, BLOOD, GORE at the Old Fitz, briefly, this year, was, from what I have read of it, an intimation of Mr Nicolazzo's talent) has everything perfectly gauged for a wonderful time. They know how to rev this stuff into a scintillating style. Let's hope they can keep it that way.

The set design (Owen Phillips): floor, walls, columns in leopard print carpet, the furniture dressed that way as well, including the beach umbrella; costumes with wit to die for, including lots of leopard print (Eugyeene Teh and Tessa Pitt); the Lighting (Katie Sfetkidis) and Sound design (Nate Edmondson); plus, choreography that punches out all the style humour of the time, and, danced magnificently, is a great credit to Kurt Phelan, are all tops.

All the acting company (ALL OF THEM) are amazingly taut and spot on, playing as an amazing clock work team: Kevin Kiernan Molloy - a sexy muscle Star Cat -the 'kick sand in my face', please!! beach boy fantasy flirting with Zoe Boesen  as Marvel Ann - thrillingly chilled or a bitch, depending on your moment to moment P.O.V. ..., yes, really!; Paul Blenheim (so good in WRECKING recently at the Old Fitz) as Provoloney and Tom Dent (Is it his real name?) as Yoyo - two boys, who will be two men, who, in a blink of time, right in front of your eyes, will really be into each other!!, good mates and true, they will be surprised, you won't be (see photograph above); Ash Flanders as Chicklet- truly outstanding - channeling many personalities (particularly, Ann Bowman) but "who learns that each of the various roles she plays in life are all part of one being, and that they only make her stronger.."; Amanda McGregor  as Mrs Forest - Chicklet's mother, who is really, fraughtly whacky - relentlessly trying to find her real role in life; Genevieve Giuffre (Berdine) - the nerdy, admirable, loyal, wise, best friend to Chicklet; Peter Paltos (Kanaka) - the king-cool-dude of the beach; and Caitlin Adams (Bettina Barnes) - the movie queen of all b-movie queens, who you'll get to love, in the end,  just as you do the Baroness (The great Eleanor Parker) in THE SOUND OF MUSIC. I promise.

All of them are special. But, my special one is Ms Giuffre and her Berdine, round shouldered, stooped, google-(goggled?)-eyed but whip smart. So, I think I should just relate her last diary entry for us to you, from the show, to whet your appetite some more:

"Life is sure whacky. Here Chicklet and I were best friends and I never really knew her. If I don't know her, can I ever truly know anyone? Star Cat thinks science can tell us everything, and Bettina says if she feels things, they're true. Oh, sweet, lonely Schopenhauer and crazy ole Nietzsche and dear, committed Jean-Paul, all of you searching and never settling for an easy answer to life's eternal puzzlement. I hereby vow to carry on your never-ending quest. I know that my true calling is to be a novelist and devote my life to exploring the fathomless possibilities of the human comedy. ..."

This is some of the smarts of this show.... exploring fathomless possibilities of the human comedy....

P.S. Dear Little Ones, my one peeve , and one of my constant ones,  is that in your program notes you have no biography of the genesis of your great production : THE WRITER, Mr Charles Busch. Not fair. Maybe, not nice?!
I say, The Writer is the God, if not GOD: "In the beginning was the word and the word was made flesh".
Can you fix it? Give him his due.
Posted by Editor at 11:14 AM

Will do Kevin. Will do. And thank you.

Will do Kevin. Will absolutely do. He does deserve that. And thank you.