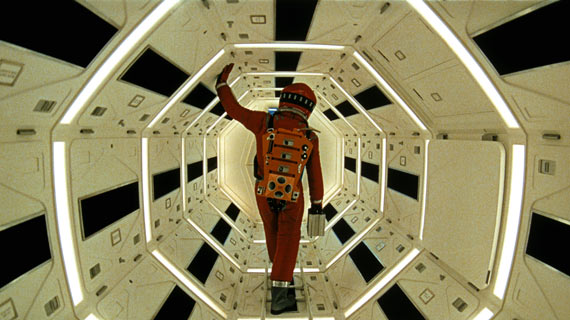 When I was 20 I saw 2001: A SPACE ODYSSEY at the Plaza Theatre in George Street in CINERAMA!

I saw it 5 or 6 times. I had not any idea what it was about. It was quite simply mesmerising. The images. The soundtrack. The scale of it in Cinerama was, in the correct sense, awesome.

The critical response at the time was mixed, but we didn't care. Really, our reaction may have been  part of the sixties cultural revolution, shucking off the staid conventions of our parents and our educational Catholic corsets that encouraged us to champion it. I remember when the Beatles' SGT. PEPPER'S LONELY HEARTS CLUB BAND and the WHITE ALBUM were revolutionary!
Boy, oh, boy, did my friends and I have so much to talk about?

Years later it became the cult 'druggie' experience... so, they tell me, so they tell me.
I even got to see it at a Drive-In. Remember the Drive-In? Remember at the Drive-In when .... well, let's not go there...
I own a DVD copy.
Last time, I watched it, it was on a screen on the plane from Abu Dhabi.
Never did the film become diminished. It maintained its effect and power.

Further years on, it became critically an appreciated Masterwork from a great genius: Stanley Kubrick. One among many. I love BARRY LYNDON and still fear A CLOCKWORK ORANGE. I reckon EYES WIDE SHUT will also grow into a Masterwork, following along the time trials, trails of the critical reception, say, of Hitchcock's VERTIGO: reviled and neglected. NOW, embraced and remarkable! Time will reveal the last Kubrick film as well, as greatness. I forecast. (Outrageous.)

The screening of the film in the Concert Hall was well done. The Soundtrack well balanced, at least to my ears, in my seat location.

The musical score of 2001: A SPACE ODYSSEY is sourced from the classical music repertoire:
Kyrie from Requiem (revised version 1997) by Gyorgy Ligeti.
Lux aeterna by Ligeti.
Also sprach Zarathustra by Richard Strauss.
Adagio from the ballet Gayane by Aram Khachaturian.
Atmospheres by Ligeti.
Adventures by Ligeti.
By the Beautiful Blue Danube - Waltz by Johann Strauss II.

An extra large Sydney Symphony Orchestra and a fulsome Sydney Philarmonia Choir conducted  passionately by Andre De Ridder were alertly attentive and gave a thrilling dimensional contribution to the night. The thrill of the first time we heard Also sprach Zarathustra was hair raising and the end credit rendition of the By the Beautiful Blue Danube, deeply romantic and swept us into a maze of emotional glaze. The latter, so lush and familiar, I began to gather the raison d'etre of the popular following of Andre Rieu.

If only it had been screened in the Cinerama format. The Plaza cinema is still there, behind the McDonalds Restaurant, I think!!!

Clover (Moore), find it , save it, renovate it. It could be a new live theatre venue, could it not?!!!! Expensive, of course - but as a vision for this city. Remember Joe Cahill and his vision and courage. Sydney without the Opera House would be where in the world's consciousness?
Posted by Editor at 10:21 PM