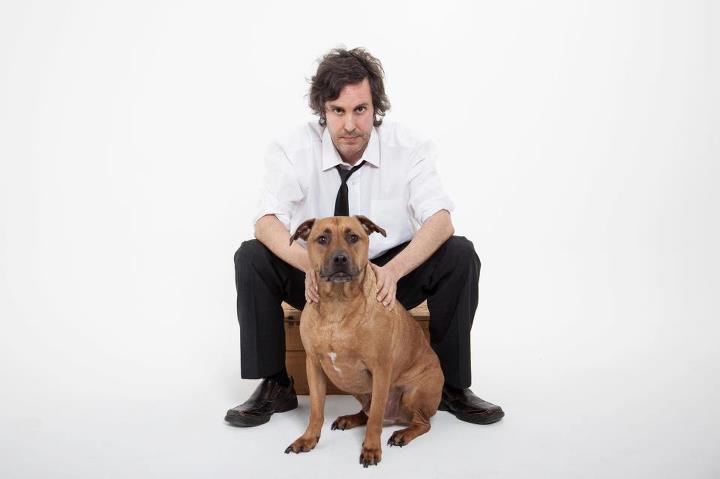 Stories Like These and Griffin Independent present the World Premiere of RUST AND BONE by Caleb Lewis from the short stories by Craig Davidson at the SBW Stables Theatre.

Craig Davidson is a young Canadian writer, novelist, and short story writer. Caleb Lewis has adapted three of his short stories for the theatre. One about an over-sexed young man who becomes disabled by a whale. Another about a young man attempting to become a professional pugilist, who becomes involved with the son of his trainer, a little boy who builds 'erections' and who becomes disabled in a near drowning accident. And, the last, about a sexually 'disabled' man who has a penchant for preparing dogs for illegal pit fights.

Each actor, Wade Briggs (Ben, of the whale story), Sam Smith (Eddie of the boxing story) and Renato Musolino (James and the dogs) carry a responsibility for a story, and, then, join in interaction role playing tasks to assist in the staged telling of the other separate narratives. Am I sick and tired of the writing form of separate narratives and no character interaction/dialogue development in our theatre experiences? YES. Most of the writing of this kind that I have seen or read is not as good as the Irish play TERMINUS by Mark O'Rowe to justify it for me - write as well as that and I will excuse the lazy formula.

The actors are erudite in the balancing of the transformational skills to do this. It is a very committed team, the staging solutions well drilled and invented with classic 'theatre-in-education' (T. I. E.) formulas by the director, Corey McMahon. Mr Smith is the most impressive of the three. There is an appealing centredness in his work. Clean, modest and yet physically and vocally charismatic. Clear as a bell, mostly, and commanding to watch. Mr Briggs does not have quite the dimensional capacity for all of his tasks and Mr Musolino seems to be pushing with too much energy, perspiring and shining in the humidity of the Monday night stormy weather, and strains one's ability to empathise with the work, as it is filled with so much physical and vocal tension - in effect overwhelming one and shutting one down to the invitation to attend to his story.

The set by Michael Hankin, looking like an emptied concrete pool with its black wall surrounds, works well for the three stories - the whale 'pool', the boxing 'ring' and the dog 'fighting pit'. It is beautiful and could move into a Museum of Contemporary Art as an art installation, (probably, it would need an accompanying artist statement, in that case). The lighting by Teegan Lee is especially sensitive, detailed and attractive, while the Composition and Sound Design by Nate Edmondson seems, unusually for him, over done. I paid much too much attention to it (perhaps, the play material was not interesting enough?).

This 'exercise' in writing is capable but the 70 minutes of this performance was a very long 70 minutes. As an 'exercise' for the writer the finished work has many merits, probably - someone thinks so. The 'exercise' that the actors and director have explored to find the way to perform the piece is admirable. But as a night in the theatre,which took (takes) some effort to partake in, these exercises are not enough.

The content of the material confounds me. I cannot find any real advantage to my life experience after hearing them. I was, rather, kind of depressed and bewildered about the state of Australian playwriting.The stories are about human beings with disabilities, sure, but for me what I took away was the writer's propensity to dwell on his character's needs to exercise their sexual organs - and not much else (yes, true, not Eddie. ... well? ... at least, not consciously! I hope.) I found this boring, so did some of the other audience I subsequently had conversation with. What was there to care about in this experience?

Anthony Ackroyd, "an Australian comedian, speaker and writer" in the News Review section of the Sydney Morning Herald (January 19-20, 2013) asked "Where are Australia's contemporary artist-activists? .... In my own field of comedy where being outspoken is part of the job description the number of Australian comics who confront audiences with material on urgent social issues is low."

This is my second visit, in a row to the Griffin organised space, to come away from well written but, to me, irrelevant play content/material. HOLLYWOOD ENDINGS had a "Who Cares?" response from me as well, whatever its particular creative well-spring was. That work was more interested in the travails of making a film then the moral questions posed about the subject matter and the consequence of that film - INNOCENCE OF MUSLIMS. Having just come back from Europe and the London theatre, the paltry social preoccupations of our Australian playwrights and their artistic gatekeepers, the theatre companies and writing organisations that encourage them, is startling. Martin Crimp's new play IN THE REPUBLIC OF HAPPINESS and Lucy Prebbles' (of the play ENRON fame) THE EFFECT, are wonderful contemporary pieces of confronting and relevant social concerns that made one feel part of a real world of urgent, necessary debate. The preoccupations of our writers and their encouragers seem more about maintaining our relaxed-and-comfortable comatosed position of antipodean safety in a "lucky country" than dealing with the urgent questions presented by our contemporary world. If our theatres are to be sustained as relevant sources of interest, then I believe our writers need to take an Ibsenite/Shavian/Hare-ish forensic look at the society we live in and translate it into vital must see and hear, 'plays' of intelligent (and researched) subject matters.

Mr Ackroyd went on: "We need a call to artistic arms. When the earth is burning there must be fiddlers who are prepared to produce strains that do not divert and reassure but instead awaken and inspire."

If I want to read some short stories to comfort my middle class needs I'll purchase a copy and read them. And, I would prefer that the limited schedules of our performing arts spaces had material that was much more plugged into the urgent issues of our world dilemmas. Enliven me, invigilate me to look beyond my sexual organs and a spoilt boy and a whale, a pugilist and his guilty mistakes, and an under performing husband who, perhaps as a compensatory 'thing', trains dogs to kill each other!

As Mr Ackroyd concluded, "Take a look around, creative people. It's time." I agree.

RUST AND BONE is a minor writing exercise, using as inspiration Mr Lewis' enthusiasm for the writing of Mr Davidson. In reality, not enough reason for the rest of us, necessarily, to brave the Australia Day Storm to get to see.

P.S. It is interesting to read the Caleb Lewis blog on the Griffin web site concerning adaptation. Please do. The quality of the writing of the source material of Mr Davidson is striking, especially when one remembers the experience of the adaptation in the theatre. I would rather like to read the original.
Though, certainly, I admit the first example of the adaptation in the blog (about the boxer's hand etc) is, also, striking, even compared to the original - it's just, perhaps, that the actor and director did not communicate it distinctively enough for me to admire it 'in action' in the theatre, I suppose? I missed the skill of the adaptor in the moments of watching. I may have wandered away too far by then? The hazards of performance and direction, I guess, for what was on the blog-page was arresting.

It is also a relief to read the statement from the new Artistic Director of the company, Lee Lewis, lamenting the terrible cultural destruction in Timbuktu, and the parallel responsibility of our theatre companies to the dramatic literature which we will leave for posterity, to understand us better.

P.S. to P.S. Just my usual protest to theatre companies that the writers are given space in the program to acknowledge their contribution. Craig Davidson the inspiration for this work is not introduced to us at all.

I guess the internet is available for those of us that are interested!