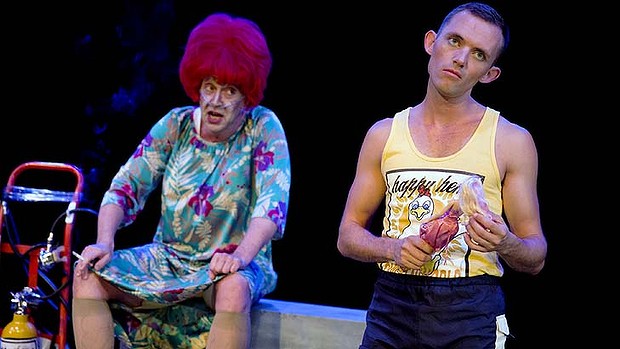 MILKMILKLEMONADE a play by Joshua Conkel concerns, in essence, the coming-of-age of two young boys, Emory (Mark Dessaix) and Elliot (Kieran Foster) living in the boon-docks of somewhere in America, who are gay and are not sure what that is.

The play is set on a chicken farm. It is run by Nanna (Peter Nettell) - impersonated here as a lady with all the visual 'drag' qualities of kitchy butch: flamboyantly grotesque trappings of wig, make up and costume, who has a certain pragmatic charm and direct simple narrowness of belief and needs. She seems to care for her charge, Emory, but, we have to project that 'tough love' aspiration onto Nanna, for there is no excessive emotional showings from her. It is part of the surreal, imaginative vision of Mr Conkel. For on this farm, young questing Emory (note the heritage nomenclature that Mr Conkel has given his hero - that of the acerbic character in the ground breaking gay play, THE BOYS IN THE BAND (1970)), in compensation for his lack of a loving icon to give him guidance, has invented an imaginative avatar to console him, a talking chicken, Linda. And, boy, does he need that creation, to help him try to understand his sexual proclivities and bring the aggressive behaviour of his pyro-maniacal, neighbourhood friend, Elliot, into some kind of perspective. Mr Conkel has also provided us, the audience, fortunately, with an interpreter, to this mayhem, a Lady in a Leotard (Leah Donovan).Whether she actually clarifies or adds to the mayhem, is a question one can debate after the show!

There is a pop culture explosion of props, stage furniture and costume (Set Design, Antoinette Barbouttis; not sure who designed the costumes!) and, amidst the physical staging of the show, a number of robust and highly entertaining dances (including a ribbon dance) bursting out with the effect of a kind of 'firework' experience. Exhilarating, but also kind of SCARY. Scary for they transcend,  all my altered states visual experiences at Mardi Gras, even  my Bad Dog party visual thematics, and they, I can assure you, can be quite scary. These Dancers and the Dances are quite appealing in their ability to bring on a panic of incredulity. A goggle eyed spectacle indeed - delightful. (Sound Design,/Composition by Kent Rowston. Choreography by Angela Blake, assisted by Joel Thomas).

Mr Conkel wrote this play in 2009 and quotes the playwrights Charles Ludlam, Charles Busch, Nicky Silver and Christopher Durang as mentors and heroes for his derring-do. Check out their plays and you will understand.

Those writers' work and this work are very difficult to pull off. I mean really hard. The mental and physical 'tone' of those writers and Mr Conkel, requires the right inspiration, delicacy and learnt discipline, for them to work at all.The recent production of Mr Busch's PSYCHO BEACH PARTY at the Bondi Pavilion in December, 2012 was a glittering marvel of a gift for audiences - all the necessities were in place. It was a template for the kind of skills one needs. This company at the New Theatre under the direction of Melita Rowson explore and deliver this material with all the gusto that it requires, but, on the night I saw it, something was awry, slightly amiss (the infamous second night Blues, perhaps?). Being amiss, even, slightly, in this kind of work does not work.

I saw the potential of this production, but kinetically that potential, on the night I attended, wasn't there. Mr Dessaix and Mr Foster were impressively working their 'buts' off to keep it afloat, ably anchored by the indefatigable Mr Nettell, but something was, definitely, not quite working on Friday night. (Please check the Jason Blake review to get another viewpoint.)

This play has the potential to knock your socks off and explode you with witty political subversiveness. Your response to this production of the play will depend on whether the company are in synchronisation, whether they have it together or not. Take pot luck and cross your fingers for a more disciplined performance than we had. It could excite you in a way that the recent PSYCHO BEACH PARTY did - it has others, on different nights it seems.
Posted by Editor at 11:17 PM