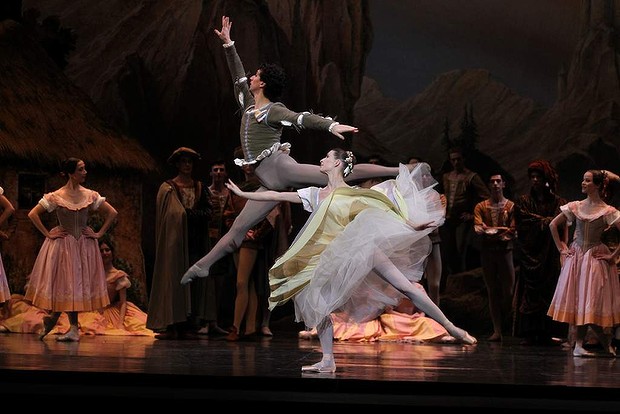 GISELLE presented by the Paris Opera Ballet at the Capitol Theatre in Sydney is as near a perfect Classic Dance experience as one could want. In 2007, Mr Ian McRae and Mr Leo Schofield brought to Australia this outstanding company and gave us Rudolf Nureyev's SWAN LAKE and George Balanchine's JEWELS. If you missed them then, and love the theatre, dance in this instance, do not let this opportunity pass you by. This is theatre on a rarefied plane of breathtaking excellence.

From the Director of Dance for The Opera National de Paris (the Paris Opera Ballet):


We are delighted to be starting 2013 with a new Australian tour: indeed, 2013 is a special year for the Paris Opera, which is celebrating the Tricentenary of the Ecole francaise de danse, the French Dance School. A veritable cornerstone of our national identity, from Louis XIV to the present day the French School has grown through a respect for academic tradition along with the assimilation of new influences and the addition of numerous creations which have contributed to the development of the French style and its repertoire, the quality and diversity of which the Australian public has been able to appreciate during our previous tours.


It is more than a little mind bendingly wonderful is it not, to take in that idea of a theatre school and company that is 300 years old? (being Australian) - I mean from the time of Louis XIV, The Sun King, long before the Bastille and the 1789 revolution!? Longevity is of course nothing in itself, BUT, add the sense of the valuing of the continuous academic tradition of knowledge with the addition of the assimilation of the zeitgeist of the eras of experience being absorbed within the craft and art of the company, understand, perhaps, why some of us who practice in the fields of the arts in Australia, believe that the tragedy of our governments' careless (care less) or ignorant knowledge (deliberate or otherwise) of the recent catastrophic changes in many of our institutions of theatre/performing arts training, where the successful traditional values (and staff) are jettisoned in the name of change and innovation (some say for corporate change appearances that gives the facade of innovation) is a phenomenal disaster for our country's cultural future.

GISELLE, coming from a period of social and political change in France, from another, a different revolution, this one in 1830 against the conservative government of Charles X and the House of Bourbon, liberating the Paris Opera, amongst other 'things', from being the property of the royal court to a subsidised, private enterprise, saw the new director, Dr Louis Veron, seeking a new audience for the opera/ballet, 'searching' the zeitgeist trends of the society about him, to create meaningful and popular, contemporary work. GISELLE, then, grew out of the Romantic Movement aspirations of the society of the 1830's. "The story was conceived by Theophile Gautier, French writer and critic and huge admirer of the ballet. It was based on two literary works, a poem by Victor Hugo called Fantomes (Apparitions) and a section from a work by the German poet Heinrich Heine, De l' Allemagne (From Germany) in which Heine discusses Wilis, ghostly figures of brides who rise from their graves at midnight to dance." Drawing, further on the talent of librettist, Vernoi de St Georges, with choreography from Jean Coralli, with significant contributions from Jules Perrot, and a new and innovative (in form), composition by the then well respected Adolphe Adam, GISELLE premiered in 1841, to great success, not just in Paris, but across the rest of Europe.


The original production of GISELLE stood, then, at the crossroads between an old order and a new approach to the ballet. Since 1841 the work has undergone many changes ... but it has remained one of the great works in the ballet repertoire, changing to accommodate new audiences and new approaches.


Following Serge Diaghilev's Ballets Russes guest appearance at the Palais Garnier, in 1910, the work was brought back to the attention of the French stage, and it has figured in the repertoire of the great international companies ever since. This ballet embodied for the first time the telling of a story through dance alone. The use of dance and mime became a revelation of the period.

This current version was updated in 1991 by Patrice Bart (English influences) and Eugene Polyakov (Russian influences), who adapted the original choreography of Coralli, Perrot and that of Marius Petipa (the Ballets Russes version). Its traditional core values and lineage wholly embraced within the new cultural demands, changes, of different periods of history. One of the innovations of the Adams score in its time was the inclusion of musical 'space' for the mime alongside the dance. This now has been re-introduced in a very decisive manner in this choreographic conception. Further, the Paris Opera in seeking to keep the ballet current and uniquely arresting, since 1998, the production has been performed using the sets and costumes of Alexandre Benois - painter for the Ballets Russes - completed in 1924 for the revival of GISELLE at the Paris Opera. Tradition and innovation hand-in-hand - the healthy 'babies' of the work not thrown out with the bath waters. The best of the traditional heritage kept, embraced, with the contemporary.

It is interesting hearing the score begin, (the Sydney Lyric Orchestra under the excellent conducting guidance of Koen Kessels- the music score was revealed in detail and beauty as I have not heard before), with its 19th century familiarity, then been augmented by the vision of the stage setting and costumes, however beautiful of themselves, that at first sight might give the impression of 'old hat' - 'ballet antique' and a momentary breath of anticipated boredom, to have it swiftly transformed into admiration, with wonder, when the dancers begin. What looked like, in my too swift to judge first take, fusty, became the glorious genius of the right setting for this living company of disciplined artists. The technique of this company is so breathtaking in ensemble and principals that all becomes a whole. Not an error of judgement apparent in any part of this Company's choices.

The first act set in the rustic village is beautifully danced with skill of an ensemble equipped with a technique that is faultless and buried within the action of the storytelling, such that any hesitation about the relevance of such material on a stage in 2012 is whisked away with the unearthly wonder of it. The human skill is simply wondrous - Olympian. There are no Computer Generated Images here (C.G.I.), it is all alive and magical - the imaginative world that these artists present to us, live, is never doubted, questioned. Their imaginative belief and technical skill is overpowering, overwhelming to any doubting of relevance!

And, the second act set in the otherworldly, ethereal grave yard visited by the Queen of the Wilis, Myrtha, and her charges, "the souls of young women who have been betrayed by unfaithful lovers" all in 'ballet blanc' dress is spectacularly transporting in its beauty and pathos.

Ms Gilbert dancing Giselle has all the physical limpidness of sorrow combined with athletic and artistic skills of the most magnificent kind, (her backward exit on point truly an amazing athletic feat, but, also a heartbreaking choreographic story point). The dignity of Ms Gilliot, as Mythra, and the bewitching technique of her dance, lifts the second act and this work, with her entrance, onto a different 'planet'/plane of belief. Mr Ganio, as Albrecht, is both breathtaking in his acquittal of his choreographic demands (those super amazing consetcutive leaps vertically into the air, demanded by the Wilis , one after another, progressing to exhaustion) and commandingly empathetic in his story telling and character journey. Here in these three and the excellent Mr Bezard as Hilarion, high Romantic Art, storytelling, that simply, in this technical age of computer enhanced wonders, embrace the magnificence of dedication to an art form that ought to be, is thought to be by some, a relic, but here with this company, is a symbol of what man and woman can achieve with gifts, training and passion. Nothing can match the experience of flesh on flesh at such a high level of physical, intellectual and emotional commitment. This is an achivement of high order - all the greater because one thought it was not, any longer, achievable. Here then is a modern miracle.

Do go. The expense is a philistine care, I reckon. It is a priceless experience.

Later this year the Australian Dance Theatre (ADT) will present its, I imagine de-construction of this story/ballet, called G. I look forward to it. As I do the Sydney visit of the Nederlands Dance.

N.B. Quotations come from Program Essays including:
1. Michelle Porter 2013. Giselle: ballet at the crossroads.
2. Valerie Lawson 2013.The wandering years are over as Giselle comes home to Paris.
3.  Yvonne Frindle.Adolphe Adam and the music of Giselle.


Kevin,
I share your enthusiasm.
In this GISELLE there are thrilling contributions from the principals and a level of technical perfection that is sustained through the entire corps de ballet.
Ms Gillot's entrance in Act II - that celebrated cross on point from one side of the stage to the other, as if she were being drawn by some invisible puppeteer's thread,was the stuff of classic ballet dreams.
M. Bezard executed everything he did with an economy and exactness of gesture that made his emotions as the aggrieved lover clear as a bell.
M. Ganio elicits gasps of wonder. As the darkness of the second Act deepens, he hurls himself through the air and arrives stock still in beautiful, expressive shapes.
And from the leading lady, the first startling moments of the evening, as she takes us by surprise with her sudden descent from peaks of joy to pits of despair and pain.
From my seat six rows back in the circle I appreciated as never before the wonderful acoustic of the Capitol. How fortunate we are that the push to 'develop' Sydney did not - back in the 80s - get the better of the visionaries who restored this jewel of a theatre.
Let's hope that the company tours again - !