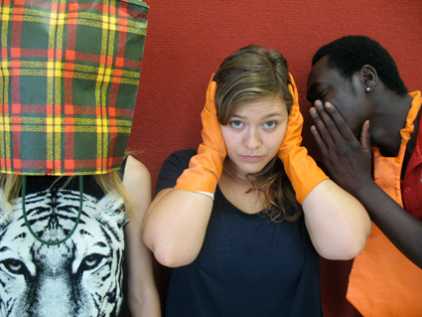 Pact Centre For Emerging Artists presents A Performance By The 2013 Pact Ensemble; HARVEST in the Pact Theatre, Erskineville.

Julie Vulcan, the director tells us in her program notes for this performance, that "HARVEST investigates the world we live in through food, consumption and waste."

A small group of young "emerging artists" have with Ms Vulcan researched and devised a performance, situated about long tables surrounding a heightened platform. The audience is personalized and invited in groups into the space to share the experience. We are offered milk and peanuts whilst the result of rehearsal is strung together in performance to reveal and/or comment on the above themes. The work is couched in highly stylised physical rituals and is from the performance/installation art school of tableaux vivants. The images are labouriously set up in ritualised action - preparing the tableaux fixations often taking longer than the final images are held. The lyrics of songs and spoken text are fairly naive and not very arresting, lacking real insight, depth. The physical and vocal skills of the performers lack strength and finesse, although they have an air of complete confidence. There is also fairly unsophisticated usage of pre-recorded video work. I did enjoy the music choices which more often than not covered some of the tedium of the time this exercise took to set up in its telling.

Bridget Betzold, Kate Cooper, Miranda Drake, Jackson Hodge, Mandela Mathia, Madeline Nunn, Scott Parker and Khat Reid, the present ensemble are all enthusiasts but as yet lack the substance and skills to match their ambitions.

This is for friends, supporters and family.
Posted by Editor at 11:16 PM