I Know There's A Lot Of Noise Outside But… 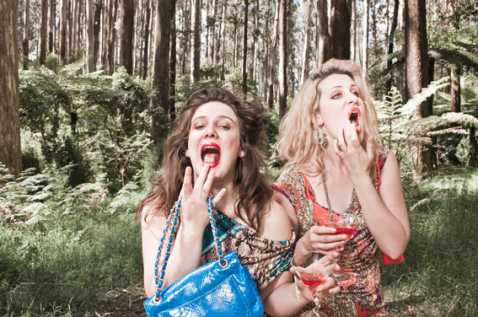 I'M TRYING TO KISS YOU in association with NIDA Independent presents I KNOW THERE'S A LOT OF NOISE OUTSIDE BUT YOU HAVE TO CLOSE YOUR EYES by Zoey Dawson, Anna McCarthy and Allison Wiltshire in The Parade Studio, at the Parade Theatres, NIDA.

I KNOW THERE'S A LOT OF NOISE OUTSIDE BUT YOU HAVE TO CLOSE YOUR EYES written and created by Zoey Dawson and Anna McCarthy, also, the actors, and Allison Wiltshire, the director. They first conceived this work in 2009 and first premiered at the 2011 Melbourne Fringe Festival and have continued to develop this work over the past year and a half. Four and a bit years in development.

Two women who once were close, meet up in a bar and begin to drink: vodka/raspberries despite the preference one has for beer. One of the women is caught up in the fantasies of worlds like that in SEX AND THE CITY and practices them as a way of living, the other studying for a Phd at University and living in an op-shop world ("my outfit cost $8"). One has a partner and lots of sex, the other hasn't a partner and hasn't had sex for 4 months and is desperate for it - boy, is she graphic in telling us about it. One is a bottle blonde (showing), the other a brunette.

This work winds on for almost an hour.


From the above list the dominant complexity of this work seems to be RAGE, using contemplations  around sex, loneliness and the warring of friendships, particularly among women, as the means to vent. There is a very consistent theme of female envy of other women, of their relative personal and professional success: women being mean to other women - an impersonation of Cate Blanchett discussing her Academy Award win for the film THE AVIATOR, by Ms Dawson, with deeply, it seemed to me, inappropriate assertions as to possible reasons for her winning, with vulgar references to 'Andrew', epitomised this.

This text meanders through rudimentary conversations about drinks, shoes, dress, hair artificialities, sex fantasises and more, and then abusive ravings - shouted, for the most part - in really offensive language, mixed with pretentious spoutings of banal surrealistic 'poetry' (!), the subject matter of which I could not understand, and, so was unable to make much sense of it. From the proliferation and density of the offensive language coming from these women, and its vehemence, one can only believe it was a deliberated choice. I assume it is a device employed to make a political statement. An act of political theatre. For that statement, however, to have empathetic impact politically, one would necessarily believe it should engage the audience rather than repel it.

Watching Ms Dawson and McCarthy, I could not help but think of Freud's later theories about "the libido and its typology: erotic, narcissistic and obsessional," which I came across in an essay by Clive James on Sigmund Freud, recently. "Everyone, he thought (i.e. Sigmund), shares all three departments, with an emphasis on at least one of them at the expense of the other two, and possibly two at the expense of the third." In this theatre performance, which seems to have been created from a powerful rage, we see, clearly an example of the narcissistic-obsessional combination. It is, apparently, the most creative combination. "Those blessed with it, or cursed, could do great work". This is not great work. The narcissism and desperate obsessiveness here, colours it beyond palatability. I could not digest it. Many of us didn't.

I think this company could use a fourth and outside eye to help them moderate and shape the work more successfully. All of the creators, perhaps, too close to the material, to sort the content and the methods to communicate the objectives of the work. After all it has had over FOUR years of development and is still, on my observation, probably, a truthful (once upon a time) but now unsophisticated cry from wounded hearts and souls, and that they rather prefer to experience it as a kind of personal nightly therapy, than a necessary communication  to an audience about the unfairness of being a woman in the societal ''blue-print". The work is primitive in its execution and affect.

The best elements are the set design by Eugyeene Teh, an intriguing collection of many, many  chairs in a closed-in, black curtained hazed space; a detailed and atmospheric lighting design by Katie Sfetkidis and the sophisticated sound design (composition?) by Claudio Tocco.

The intellectual emotionalism of these two performers does not compensate for the inert body presence and usage, combined with voices of no sophisticated use - a permanent loud volume being the principal choice. Is it just inexperience, all three creators coming from, mostly, academia,  according to the program notes, and no real training, except of that gained by being 'on the job', (as they say)? Or, is the lack of technique in the performance a deliberate alienating artistic choice? Is it an investigation into the "aesthetics of failure" fashion?

The director has organised the text to be spoken in a slow tempo (slower even than normal conversation most of the time - it is exhaustively tedious) of spoon feeding the audience the content and meaning without any sense of crafting; no tempo variations, no volume controls and no real truths. Skin deep apprehensions of intellectual didacticisms. Female angst. The peculiar choice of one of these actors to attempt to impersonate Cate Blanchett, one of the great contemporary actors in film and theatre, of consumate skills, invidiously drew perspective to the huge gap in gifts and talent of these two performers in comparison. Particularly when one remembers the skill of Ms Blanchett's performance in creating an impression/impersonation of Katherine Hepburn - for which she won the award in THE AVIATOR. (Let alone her later work in a similar task as Bob Dylan - I'M NOT THERE -2007). What was the Director thinking to allow her actor to such direct compare and contrast?

I remember a work called COUNTRY MATTERS by Danielle Maas and Jessica Wallace in 2011 and it had a much more savvy theatrical grasp of shaping its content and playing methods to communicate to an audience than this, similar work.

Outside, while waiting for my bus, Orientation Week celebrations at the UNSW , noise, with pounding rock bands filled the air. It was a relative relief, and, if I had to choose between the experiences, would prefer being outside on the footpath with the rock band with my eyes open than the hour in the Parade Studio with the Melbourne Company I'M TRYING TO KISS YOU.