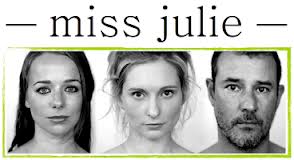 This new company, Creative State and Acompany Theatre, for its first production has taken on one of the esteemed writings for the theatre: MISS JULIE by August Strindberg (1888). This production is using the translation of Michael Meyer (1964). Michael Meyer was an expert in the Scandinavian language. He also wrote amongst other work, bio-graphies of both Henrik Ibsen and August Strindberg - both regarded as definitive works.

It was interesting to watch this play in the hands of respectful neophytes using a classic translation. The last production of MISS JULIE I saw at the Darlinghurst Theatre, was, in a new version, lovingly explored and manipulated by Cristabel Sved and Kate Box. I found it an interesting investigation, but, came away unsure of the contemporary concern about and for the play: What was its relevance? Why do it in 2012/2013? The Darlinghurst production values had, relatively, obfuscated Strindberg's work, it seems.

Watching this production of MISS JULIE, such was its simple clarity that it permitted one to consider the play and why it might be attractive for  directors and actors. This production was direct, untrammelled, and, held within the abilities of these artists, and, so, the writer's objectives were able to be seen. Certainly the characters are, all three, an exciting challenge that any actor would love to take on, and the play historically famous for its style of writing, that has been so influential on the rest of dramatic literature since, is such, that a director would want to tackle it as a means of measuring one's own craft and talent. I can see those reasons for investigating this play - and besides, it only has three actors, one set etc - budget-wise easier than some other plays - I know, philistine, but, practical/economic considerations.

This production is found in a converted factory space, in the 'wilds' of Marrickville, with concrete floor and wooden, black rafted roof with visible silver insulation tucked in, up there. The action of play is presented in the round for an audience of, maybe, 30 people. The design (Paul Caesar and Paul Metcalfe) has a wooden floor, rimmed for definition with a wooden ridge, with two slightly graded exits at either end of the stage. A wooden table, three chairs and two wooden (anachronistic) chests of drawers, with all the accoutrements of workable, naturalistic props, one with a workable cooking top. It has metal frames, one with windows, around the outer edges and a 'beautiful', working  'period' kitchen bell and speaker mouthpiece. Costumes are essentially period. The lighting, simple, with a betrayal of the production's naturalism into unnecessary theatrics of colour, at the end.

As we enter the theatre, Christine (Alix Foster Vander Elst) is preparing a meal, grinding the herbs, permeating the space with a pungent aroma. Once the roller door to the space has been closed, Jean (Paul Metcalfe) comes from his Midsummer Party duties to eat. He does. Everything has a meticulous naturalistic real time playing - the eating, the drinking, the clean up after the meal, all, is an unrushed realism, this being the theatrical experiment undertaken by Strindberg and Mr Caesar, the director - it has its mesmerizing entrancement. Strindberg brings Miss Julie (Laura Viskovitch) into the kitchen from the celebrations outside, flustered with the heat, curiosity and appetites. The play unspools with a considered ease, around these complexly observed representatives of Strindberg's humanity.

The acting is very uncomplicated and serves the in-the-moment approach of the text. It has an intelligent understanding of the spoken textual needs of the writing, and an emotional contact, but, it varies in capability and depth. Mr Metcalfe, is energetic and bald in his reading, enthusiastic but not very subtle as Jean; Ms Viskovitch as Julie has, a 'look', but, not, as yet any real power and depth for the demands of the role - it tends to sit on surface emotions that are not always true, rather acted/pretended - the voice lifting into high range and inaudible 'screeching', it has no true centre. The famous monologue "You think I can't stand the sight of blood ..." - the litmus test of any performance for Miss Julie is, here, unfortunately, a 'young' actor at work; Ms vander Elst has a grounded attitude to Christine and a practicality of understanding if not, yet, the complete actor's tools to bring it to real impact. All three actors are, relatively, raw, but committed.

What the acting does not have is the contextual truth and sense of the lives lived by these characters that brings them to the events that we are witnessing. These actors bring characters that have had very little living, outside of what we see on the stage. Watching the simple unsophistication of the reading by these artists and director one could see what the real challenge of the play is. It does require a deep need to have, from the text extraction and a cultural study of the given circumstances of the world of the play, a dynamic possession of the life force/life history of the characters, one, as rich as the life forces of the actual actors in their own present life choices. These characters need to be real within the naturalistic landscape of Strindberg's experiment, and Mr Caesar's exploration. Strindberg is writing a play driven by character and not plot, it is the 'what', 'why' and 'how' of the characters that we need to perceive: their histories, and motivations, wants, that have been evolving manifestly for the full life-age of the people in the play. And when that is so, I believe, one can, possibly, see the human type/icons in front of us, and if endowed/embodied with the deep and real passions of the emotions of the events of the play, it can connect us, like all great writing, to the great reverberating myths of our human heritage. The human animal struggling with heredity and circumstances to find their unique path in the big dance to the music of their time. That time that is all our time: where the present is the past manifesting, is the future, which instantaneously becomes the present to be the past again. The human presence in the fleeting speed of history/ time. The relentless cycle of our behavioural urges, represented, repeated. This play demands truly accomplished artists to realise its greatness. I have never been lucky enough to see any wrestling with this play.

This production of MISS JULIE then has a beginner's insight and execution, but brought with it, for me, an entrance, a means to grasp the revered status of August Strindberg's play. Belvoir will give it Downstairs, later in the year, and I am curious as to what they will bring to the work. In this classic translation by Michael Meyer one is given a blue-print for apprehension and appreciation. It is rare to see so many productions of a single play so close together here in Sydney, as one may do in Europe, to have the ability to see the play, to be able to distance the experience, to look at it as an object'd'art and not just a story/narrative or entertainment. To see the interpretative gifts of the artists working, struggling with it to bring it to its true powerful kineticism.
Posted by Editor at 9:02 PM